Momentum turns against Lions in 28-7 loss 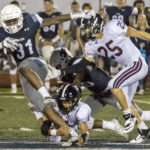 Lawrence High junior Dante Jackson grabs onto the ankle of Lee's Summit West receiver Kevin Knox (31) while Santino Gee (25) comes to help with the tackle during their game Friday night in Lee's Summit, Mo. The Lions fell to the Titans, 28-7, and drop their record to 2-1 on the season.

Lee’s Summit, Mo. ? In an instant, Lawrence High football players went from cheering on the sideline to putting their hands on their helmets in frustration.

The tide of momentum quickly went against the Lions in a 28-7 loss at Lee’s Summit West on Friday, only the school’s second game against an out-of-state opponent in program history.

On the third play from scrimmage in the second half, LHS junior quarterback Dante’ Jackson faked a handoff to senior running back Trey Moore and ran up the middle for a 66-yard touchdown, tying the score at 7-all.

But on the ensuing kickoff, LSW junior Phillip Brooks found space and returned it 66 yards to the 26-yard line. Four plays later, the Titans (3-2) took a 14-7 lead on a nine-yard touchdown pass from senior Cole Taylor to junior receiver Mario Goodrich — a lead they would never give up.

For a moment, the Lions (2-1) nearly wrestled momentum back onto their side. Following Goodrich’s touchdown, LHS sophomore Clarence King had a 55-yard kick return. On the next play, Moore broke tackles to the five-yard line but the play was called back because of a holding penalty. Two plays later, Jackson (105 rushing yards) left the game because of an apparent leg injury.

Without Jackson, the Lions produced 28 yards of offense on their final 11 plays. That included an 11-yard run by Moore on the last play of the game for the team’s only first down in the last two quarters.

Jackson briefly returned for one punt, but didn’t take another snap behind center.

“He’s one of the main parts of the offense,” Moore said of Jackson. “He did all he could. He had a great game. But he’s fine. He’s not going to be out for the season. It’s a cramp, so I mean, it’s not bad. He will be back next game.”

Lee’s Summit West’s offense totaled 404 yards compared to Lawrence’s 227, but had trouble finding the end zone against the LHS defense before special teams shortened the field.

Along with Brooks’ long kick return, Goodrich had a 45-yard punt return in the third quarter. With the ball at the 34-yard line, the Titans scored in five plays when Brooks broke free for a 14-yard touchdown run.

“The difference for me was my line,” said Brooks, who had 142 rushing yards and two scores on 19 carries. “They executed very well in the second half, opened up holes and allowed me to get into space.”

In the first half, the Titans made four trips inside of 30-yard line, but were held to one score — a 19-yard touchdown run by Brooks in the second quarter. LHS senior defensive back James Reeder intercepted a pass in the end zone and two field goal attempts went wide left.

Brooks said the Lions switched players around in their defensive formations, which caused some confusion for their offense. LHS seniors Jake Unruh, BJ Murry, Azariah LeBrun, Mark Greene and Cade Burghart, and sophomore Samuel Bart all made tackles in the backfield in the first half.

“I was very curious to see how we would react when we got punched in the mouth, and I love the way they reacted,” LHS coach Dirk Wedd said. “We’re going to get there. Defensively, that’s the best we’ve looked in three games.”

After the Lions led with their offense in the first two weeks, averaging 51 points, they were thrilled to see their defense play at such a high level.

Plus they are confident that any of their mistakes can be fixed in the upcoming week.

“Our coach has been telling us all week, we’ve got to pay attention to the reads,” senior linebacker Erik Shackelford said. “Once we got that, he said we can play with these guys. We knew we could. These guys are a great team, but we’re a great team.”