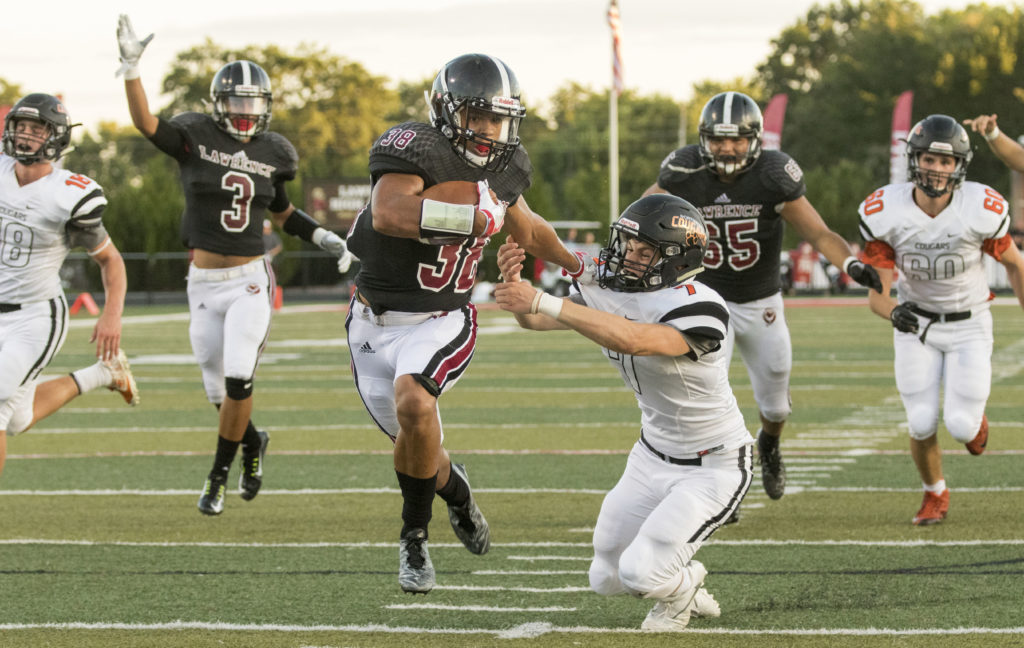 Lawrence High senior running back Trey Moore (38) gives Shawnee Mission Northwest defensive back Caleb Johnson (7) a stiff arm as he breaks away to score one of his four touchdowns during their game on Friday night at LHS. The Lions jumped out to a 23-0 first quarter lead and never looked back as they defeated the Cougars, 50-20.

Lawrence High running back Trey Moore suffered a season-ending injury last year against Shawnee Mission Northwest, but it was a complete 180 for the LHS senior in the Lions’ home opener Friday night.

Moore made amends for his frustrating game against the Cougars in the 2015 campaign by rushing for 168 yards and three touchdowns, and scoring another through the air on a pass from Dante’ Jackson to lead the Lions to a 50-20 victory over SM Northwest.

“This is really special. I’ve been wanting to play football since that fourth game, and have been itching to play,” Moore, who fractured his scapula in his left shoulder last year against the Cougars, said. “It’s sweet, sweet revenge. I’ve worked hard all summer, and I’m glad we got the result we did tonight.”

The 5-foot-10 running back scored on runs of 21, 62 and 28, as the Lions rushed for 387 yards in the season-opener. Hunter Krom added 88 yards on eight carries, and Jackson and backup quarterback Devin Lauts each chipped in a score in the running game.

“The O-linemen — Kristian Russell, Kobe Buffalomeat, (Jesse) Tunget — they opened up some big holes,” Moore said. “The holes were there, and I just hit it hard and ran fast.”

The Lions jumped on the Cougars in the first half with their new no-huddle offense, and took a 37-0 lead going into the break. Jackson sparked the Lawrence offense with a 56-yard touchdown run on the third play from scrimmage. Jackson had some pre-game jitters going into his first start under center, but the long run to the end zone helped ease his nerves.

“Honestly, it calmed me down times 100 because I was in my head a lot,” Jackson said. “It felt really good after that touchdown with all of my teammates around me and hugging me and telling me to get back on the field and score more touchdowns.”

While Lawrence coach Dirk Wedd does not plan to have many players line up on both sides of the ball this season, Jackson is an exception. The LHS junior also came up with an interception on a pass from SM Northwest quarterback Peyton Carder, and pinned the Cougars on the 1-yard on his first punt of the night.

“We know how explosive he is. Last year when he was at inside receiver, he did a lot of great things,” Wedd said. “The only thing that surprised me was how well he handled the lack of a huddle and getting us into the right formation and doing so many things besides just being a quarterback. He had never been a quarterback before, so he had a lot on his plate tonight, and he handled it very well.”

The Cougars struggled to get good field position for much of the first half between Jackson’s punts and Lawrence’s stout defense. Senior defensive lineman BJ Murry came up with a safety after taking down SM Northwest starting quarterback Spencer Stewart in the end zone to points two points on the board from the LHS defense, and senior Erik Shackelford returned a punt that was partially block for a touchdown to add a score by the Lions special teams.

Wedd felt good about the all-around play from his team in the first 24 minutes, but he was discouraged with the Lions’ play in the second half. The LHS coach noted that the Lions will have to bring their ‘A’-game defensively next week as they take on SM North senior quarterback Will Schneider and the Indians.

“They got a big-time quarterback. He’s been starting since he was a freshman,” Wedd said. “He’s a great basketball player and great athlete. They lit us up to the tune of 32 points against a really good defense, so we’re going to have our hands full.”

The Lions defeated the Indians 56-32 in the first round of the playoffs last season. Lawrence and SM North will kick of at 7 p.m. Friday at LHS.

As the Lions embarked on another football season Friday night, they also took time to honor one of their past coaches in Bill Freeman, who died in December after a bout with Alzheimer’s. 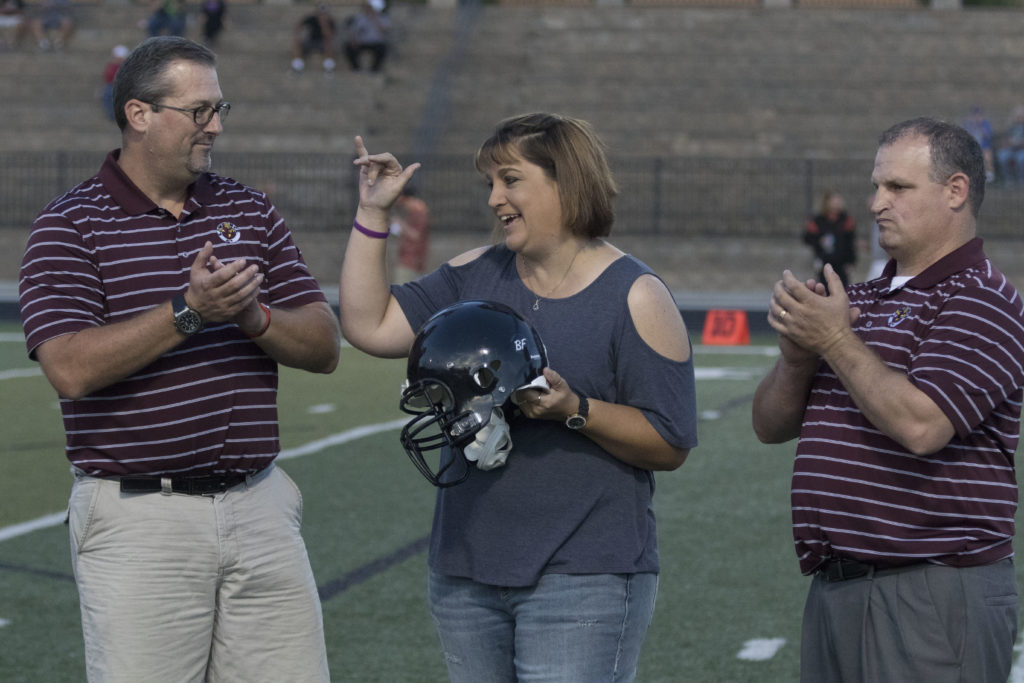 Jennifer Freeman, of Leroy, waves to the crowd as she is presented a helmet in honor of her father, former Lawrence High coach Bill Freeman, during a ceremony during the Lions' game against Shawnee Mission Northwest on Friday night at LHS. The Lions jumped out to a 23-0 first quarter lead and never looked back as they defeated the Cougars, 50-20.

Bill’s daughter, Jennifer Freeman, was presented with a LHS helmet after the end of the first quarter, and all of the Lions had “BF” stickers on their own helmets.

“It means a lot to us,” Moore said. “He set a big standard here at LHS, and we all cherish him.”