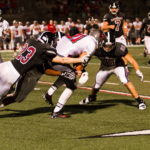 Wedd wanted to take advantage of the wind and was hoping the defense could help set the tone with strong field position.

The defense did much more than that, delivering a knockout punch in the first few minutes to help the third-seeded Lions to a 51-12 rout at LHS.

The 14th-seeded Jaguars (2-7) committed six turnovers in the first half, including three in their first five plays. That helped the Lions jump to a 21-0 lead in a blink-and-you-missed-it three minutes.

“We haven’t won in two weeks and we were hungry,” said LHS senior defensive lineman BJ Murry, who had two of his team’s five sacks. “We needed a real good game so we could get back on track and stop feeling these losses all the time.”

On the first play of the game, a shotgun snap went past Blue Valley West junior quarterback Keaton Goodale into the end zone and Lawrence senior Cade Burghart recovered for a touchdown with only eight seconds off of the clock.

LHS senior linebacker Santino Gee grabbed an interception on the next drive, setting up a 10-yard touchdown run by senior running back Trey Moore. One play later, another shotgun snap went behind the quarterback and LHS senior defensive end Jacob Unruh grabbed the ball at the two-yard line to help Moore to another touchdown run.

“Once we had the energy, we just kept it for the whole half,” LHS senior James Reeder said.

Even when things went wrong on offense — junior quarterback Dante Jackson fumbled on an option pitch in the first quarter — the defense found a way to respond. Two plays following the fumble, the Lions (6-3) forced their own fumble and it was recovered by Murry.

“Defensively we’ve got a lot of work to do,” Wedd said. “But God, they come to practice every day and work their tails off. That’s all you can ask.”

Four plays after Murry’s fumble recovery, Jackson connected on a 37-yard pass to receiver Clarence King and 10-yard pass to Ekow Boye-Doe, setting up Moore for an 11-yard touchdown run.

The 5-foot-10 Moore, who punishes defenders who dare to tackle him, ran for 128 yards and four touchdowns on 17 carries, adding a 93-yard kickoff return to open the second half to give the Lions a 45-point lead and a running clock for the entire second half.

“Coming into this game, we knew we had to make a statement — and make our statement big,” said senior linebacker Erik Shackelford, who had a sack and fumble recovery. “That set the tone for the rest of the game.”

Playing through injuries, Jackson found a rhythm on offense through the air. He tossed a 24-yard touchdown to junior receiver Jalen Dudley along the right sideline midway through the second quarter.

Jackson, the 5-foot-6 quarterback, was 6 of 10 passing for 116 yards. Sophomore receiver Clarence King had three catches for 74 yards using his 6-foot-1 frame to out-jump defensive backs.

“Jackson is the engine of this whole thing and he’s probably about 70 percent (healthy) now compared to 50 percent last week,” Wedd said.

The Lions will play host to No. 6-seed Shawnee Mission North (5-4) at 7 p.m. Friday for the second round.