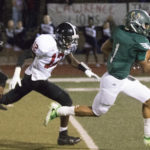 Free State High senior Zack Sanders (1) sprints past Lawrence High junior Ekow Boye-Doe (12) and into the end zone for a touchdown during their game Friday night at FSHS.

Free State High football players waited all season for a game to make a statement on both sides of the ball.

They made their statement heard loud and clear during the City Showdown on Friday.

Oh, did they ever.

The Firebirds scored 42 points in the first half and never looked back in a 56-7 rout over Lawrence High at FSHS on Senior Night. They’ve won nine of the past 11 games against their crosstown rivals and own a 12-8 lead in the all-time series.

Along with the rivalry win — the largest margin of victory in the 20-year history of the City Showdown — the Firebirds won a share of the Sunflower League title with a 6-0 record in league play, splitting the crown with Shawnee Mission East.

“We finally put a game together, both on offense and defense,” Free State coach Bob Lisher said. “That’s what we’ve been after all year and we haven’t done that totally like we did tonight.”

During the first half, Free State quarterback Dallas Crittenden threw four touchdown passes on four straight possessions — all of them traveling at least 30 yards. The poised 5-foot-10, 170-pound pocket passer was given time from his offensive line — Chase Houk, Jay Dineen, Nathan Spain, Reese Todd, Nico Guier and Spencer Roe — to look downfield and fire deep passes down both sidelines.

Crittenden completed 7 of his 12 passes in the first half for 242 yards and five scores. That included two touchdowns apiece to senior receivers Zack Sanders and Daniel Bryant and another 30-yard connection with junior Bo Miller.

“It was just crazy. I didn’t expect it at all,” said Crittenden, who finished with 257 passing yards and scrambled for 59 yards. “My linemen did such a good job and so did my receivers. They are really the ones who should be getting interviewed. They just did a hell of a job tonight.”

Before all of the touchdown passes against Lawrence’s young secondary, the Firebirds (6-2) nearly had their dominant first quarter stopped by a nightmare start. After a three-and-out on offense and a low snap on a punt forced FSHS punter Jake Rittman to put his knee to the ground at their own 11-yard line, Crittenden said players “were kind of hanging our heads.”

On Lawrence’s second play from scrimmage, junior quarterback Dante’ Jackson threw a pass that deflected off of the helmet of his offensive lineman and was intercepted by Sanders, who returned it 97 yards for a touchdown with a group of blockers in front of him for a 7-0 lead.

The Lions (5-3) only produced 28 yards of offense on their next 13 plays following the pick-six. Free State cornerback Bryant added another interception in the first quarter on a ball tipped in the air, then caught a 30-yard touchdown on the next play.

“We just couldn’t catch our breath after that,” LHS coach Dirk Wedd said. “They are a good team. We’re banged up and that’s not the same team we had two or three weeks ago. But again, give them all the credit in the world. They are a great football team and they played hard tonight. They were the better team.”

Jackson, who injured his ankle last week, didn’t participate in warmups but played the first half at less than 100 percent. The dynamic playmaker didn’t run the ball and completed only 6 of 14 passes for 40 yards with two interceptions.

“We don’t have anybody else and we babied him along,” Wedd said of Jackson. “He didn’t start practicing until a little bit Wednesday and some Thursday. It was probably a bad choice on my part because he’s not anywhere close to 70 or 80 percent. But again, he gave us the best chance to win.”

LHS senior running back Trey Moore scored on a 68-yard touchdown run near the end of the first quarter, bouncing off of an attempted tackle and sprinting past defenders to cut the score to 28-7. He had 156 rushing yards on 27 attempts.

But the Lions couldn’t create much momentum afterward and the Firebirds scored on their next two possessions. LHS defensive coordinator Adam Green was ejected following Moore’s touchdown run because of two sideline penalties.

The Firebirds focused on their run defense all week and made tackles in the backfield and line of scrimmage with key stops by Dineen, Nick Eddis, Noah Kema and David Johnson.

In the second half, both teams stuck mostly to running the ball and the clock. Bowlin scored on a 34-yard touchdown run in the fourth quarter and sophomore Matthew Georgie added a two-yard score in the final minutes.

“We were ready for this,” Sanders said. “I mean all of our games have been semi-close and we needed a statement game to prove ourselves. We just needed to make something happen and we did.”

Both schools will have home games for the first round of the playoffs next week. In the Class 6A East bracket, No. 3-seed Lawrence will face No. 14-seed Blue Valley West (2-6). In the West bracket, sixth-seeded Free State will play host to No. 11-seed Wichita South (4-4).