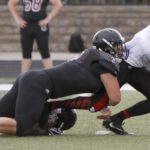 Once the ball is snapped, Unruh rushes around the edge at 100 mph. There is no such thing as medium speed or anything less than maximum effort.

On a play against Shawnee Mission West earlier this year, Unruh squeezed through a double-team block, ripped through a running back and sacked the quarterback before celebrating with a big fist pump.

But more than just making big plays, he does his best to hype up his teammates. Unruh is the vocal leader of the Lions, who will travel across town to Free State for the City Showdown at 7 p.m. Friday. He’s competitive when it comes to making plays in games or keeping up intensity in practice.

“I do have that feeling that I have to lead these guys a little bit more than I did last year,” Unruh said. “A lot more people are looking up to me and are going to see how I react in certain situations: if we’re down in the game, if we’re up in the game, if it’s close in a game.”

A three-year starter, the 6-foot-1, 251-pound Unruh has transformed into one of the top defensive ends in the Sunflower League. It’s the first year he’s moved over from defensive tackle and he no longer blocks on the offensive line under Lawrence’s new platoon system — where most players only stay on one side of the ball.

With more time to focus on defense, Unruh has caused chaos in the backfield by shedding blocks and flying to the ball to make tackles. Then there’s the passes swatted down at the line of scrimmage, pressure on pass plays and he even blocked a punt.

“He’s been kind of the rock on that defense,” LHS coach Dirk Wedd said of Unruh. “When you play our defense, you have to know where No. 7 is at all times because he can cause havoc.”

The biggest change for Unruh throughout the season was working on his speed to rush around offensive tackles and changing his technique for a better jump off of the ball.

He’s noticed he’s drawing more attention by offensives via more blockers in his direction, but that hasn’t stopped him from making the most of his opportunities.

“I think going one way, his motor runs a lot hotter every snap instead of pacing himself,” Wedd said. “He got better last year but he’d take plays off. This year, he plays hard. He’s never not played hard, but he’s playing hard now.”

During the past three years, the ultra-competitive Unruh always had one of the loudest voices on the team.

It’s been that way since he was a kid, playing in backyard football games and telling his friends that they needed to “strap down” for the next play because he hates to lose in anything.

“Most of the time,” Unruh said, “people know that when I’m getting in their face, it’s just because I care and I want everyone to be successful on this team.”

Unruh is thrilled with the defense’s progress throughout the season, but his eyes are focused on the City Showdown. After a win last year and a loss during his sophomore year, he said this year is the tiebreaker.

And his teammates know they certainly will hear his voice during the rivalry game.

“He’s been a vocal leader since his sophomore year. It just took until his senior year for people to listen him,” Wedd joked. “He’s done a great job that way.”