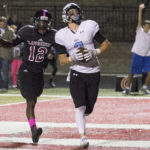 Lawrence High junior defensive back Ekow Boye-Doe (12) can only watch as Shawnee Mission East senior Trevor Thompson (3) catches a pass in the end zone for a touchdown during their game Friday night at LHS.

Facing the top-scoring offense in the state, Lawrence High’s football team learned how fast things can spin out of control against Shawnee Mission East on Friday.

In a matchup between the only two teams undefeated against Sunflower League opponents this season, the Lancers scored on four straight drives in the first half — including two quick scores in the last three minutes — on their way to a 48-26 victory at LHS, which wasn’t as close as the final score indicated.

Trailing by nine points, 21-12, after LHS junior fullback Angel Garcia scored on a one-yard plunge over the goal line, the Lions were hoping to take that momentum into halftime. Sophomore receiver Clarence King hauled in a 4th-and-18 pass for a 32-yard catch to set up Garcia’s touchdown.

But the third-ranked Lancers (6-1) had different plans.

SM East senior Nigil Houston, a transfer from SM West, scored on the next play from scrimmage — an 80-yard run where he was barely touched as he sprinted past the secondary.

After an LHS turnover on downs at the 39-yard line, the Lancers traveled 61 yards in 44 seconds for a 35-12 lead heading into halftime after a 17-yard touchdown pass to senior Trevor Thompson.

“We haven’t played a team that good,” said LHS junior Ekow Boye-Doe, who had two catches for 68 yards.

Lawrence (5-2) junior quarterback Dante Jackson exited with an injury on the two-point conversion attempt following Garcia’s touchdown. He had a walking boot on his left foot and was walking with crutches afterward, which LHS coach Dirk Wedd described as a high-ankle sprain.

Jackson, who threw a 60-yard touchdown pass to Boye-Doe on the last play of the first quarter, was drilled on nearly every pass attempt. The quick and shifty Jackson completed six of his eight passes for 114 yards while trying to run away from SM East’s powerful defensive line.

“When you’re playing a quarterback that is as dynamic as (Jackson) is, you want to tackle him as much as you possibly can,” SM East coach Dustin Delaney said. “Our defensive line did a nice job of getting to him and our linebackers did as well.”

Without Jackson, the Lions stalled on offense with backup quarterback Garrett Romero. In the third quarter, they had two drives that ended with three-and-out punts.

Five plays into the third quarter, the speedy 5-foot-7, 160-pound Houston broke a few tackles on his way to a 68-yard touchdown run and a 41-12 advantage. Houston ran for 180 yards and two scores on six carries.

Facing a quick-paced, flexbone offense, the Lions struggled to put SM East into long third-down situations. The Lancers punted once in the first quarter, but otherwise converted eight of their nine third downs before backups stepped on the field for most of the second half.

“It was hard for us to get off blocks,” Wedd said. “There’s no secrets. You know that they are going to run that fullback and he’s hard to tackle. It’s even harder to turn his hat around. He falls forward and we could never get the chains in our favor.”

“It was important. I’m not going to give up,” Moore said. “We’re going to make a statement. I had to run the ball hard and just prove to people that we just don’t give up when they are up by a lot of points.”

In the first half, the Lions had some success moving the ball against SM East’s defense, which only allowed 14.2 points per game entering Friday. But there was a fumble on a handoff that stopped their first drive and Jackson didn’t find much running room — 22 yards on 10 attempts.

“I told the kids I’m proud of them,” Wedd said. “They competed. There was no quit. (The Lancers) were better tonight.”