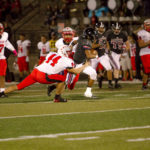 Lawrence High quarterback Dante Jackson (#1) breaks a tackle for a long run against Shawnee Mission North on Friday in the Class 6A state playoffs.

Lawrence High’s football team was playing without three major pieces in its offense and trying to win a shootout against Shawnee Mission North.

Yet, the Lions still had a chance to win in the final minutes Friday.

In a battle of whoever-has-the-ball-last, the Lions dropped their heads when they saw SM North junior kicker Oscar Aguilar drill a 26-yard field goal with two seconds remaining for the game-winning score in a 52-49 thriller at LHS in the second round of the Class 6A state playoffs.

The Indians set up their game-winning field goal by forcing a punt at midfield and receiving the ball at their own 13-yard line with 2:02 left. It was Lawrence’s first punt of the night.

SM North senior quarterback Will Schneider converted on a 4th-and-1 at his team’s own 35, then threw a 38-yard pass to sophomore receiver Billy Conway on the next play to the 27-yard line.

Indians coach Ben Bartlett admitted he was ready to send out Aguilar for a field goal after the long catch — a fade pass down the left sideline — but he had all of his timeouts and 35 seconds left. The Indians ran the ball on four straight plays to set up Aguilar’s 26-yard attempt and the Lions called a timeout to try to freeze SM North’s kicker.

“When they froze him, it didn’t bother me because Oscar is a soccer kid up until this year so he didn’t know what that means,” Bartlett said. “He was confident.”

On the next play, Schneider found sophomore receiver Noah Laird wide open for an 80-yard catch-and-run score. Schneider threw for 385 yards and two touchdowns, including 219 yards and two scores to Laird — his favorite target Friday.

SM North senior running back Marcos Garcia followed with a tying two-point conversion on a run up the middle. The Indians missed on their previous two-point attempt when LHS junior Ekow Boye-Doe knocked away a jump-ball pass.

“That hurt a great deal because we fought like hell to score,” LHS coach Dirk Wedd said. “It was too easy. If they had to work to get it, then that’s one thing. Just throw a little dump for 80 yards, that was devastating.”

Playing without his top two running backs because of ankle injuries, LHS junior quarterback Dante Jackson — who was playing through an ankle injury — did his best to keep the offense rolling. Jackson ran for 60 yards on 17 attempts and threw for 215 yards and two touchdowns, which Wedd called an “unbelievable” effort.

On the first drive of the fourth quarter, Jackson converted on a 3rd-and-19 scramble, 4th-and-11 scramble and 4th-and-3 bootleg to set up a one-yard touchdown run by Angel Garcia.

Senior running backs Trey Moore and James Reeder both exited in the first half with ankle injuries, along with junior receiver Jalen Dudley. Reeder scored two touchdowns and grabbed an interception before he was forced out of the game.

“I was so proud of them,” Wedd said. “They fought so hard and we were so banged up. … To put 49 points on the board with your third-string tailback, that’s telling you something about a bunch of kids.”

The Lions, who ended the season with a 6-4 record, had the ball with a 42-35 lead early in the fourth quarter following a three-and-out by their defense, but they fumbled a handoff exchange, which led to a one-yard TD run by Schneider.

Despite giving up 52 points, Lawrence’s defense forced two turnovers on downs, two interceptions (Reeder and Boye-Doe) and had three sacks from Jacob Unruh and Azariah LeBrun.

“Tough way to end a season,” Wedd said. “But from a team that lost 18 starters and was picked ninth in the conference and probably should’ve won three games, it was an unbelievable amount of effort. In my eyes, it was a great season.”

The sixth-seeded Indians (6-4) will meet No. 2 Shawnee Mission East (9-1) in the state quarterfinals next week.