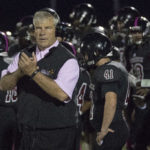 Lawrenec High coach Dirk Wedd claps from the sideline during the Lions' game against Shawnee Mission East on Friday, Oct. 14, 2016 at LHS.

Lawrence High football coach Dirk Wedd joked that it’s hard enough to remember what he ate for breakfast, let alone details from every specific game in his coaching career.

But his next victory will push him across an exclusive milestone.

“All that tells you is that I had some really great players to coach and been around the best assistants that a head coach could ever dream of,” Wedd said. “You put that together, and then again if you coach long enough, you’re bound to run into it at this school especially.”

Wedd, in his 18th-year at the head of the program, was an all-state center for the Lions in 1969, playing one season in high school under Woolard, who shifted him from guard to center during the middle of his junior year.

But growing up, Wedd knew he wanted to become a coach. His late father, Ralph, was a longtime football coach at South Middle School and gave him the advice to learn from each coach he’s worked alongside.

“I lived every day growing up with the best coach I was ever around, my father — hopefully some of that rubbed off,” said Wedd, who owns a 99-81 record.

Following his playing career at Emporia State, Wedd was an assistant football coach at Pratt Junior College and Wichita State before joining Dick Purdy’s staff at Lawrence in 1990.

When Wedd was promoted to head coach in 1999, he was the first LHS grad to coach at the school since 1938.

“I don’t ever want to say I had a hard road,” Wedd said. “There’s a lot of paved space out there. I didn’t have to go down very many gravel roads.”

A former LHS baseball coach, Wedd, 64, has surrounded himself on his coaching staff with several LHS graduates, including a few that played for him during their high school careers.

Those players-turned-coaches noted that the intensity of Wedd’s old-school coaching style has changed throughout the years. Wedd still has the same level of intensity — “He picks and chooses when he brings it to the table,” co-offensive coordinator Chris Johnson said — but he knows when to bring occasional levity.

During practice Monday, for Halloween, he wore a blonde wig and sunglasses, dancing in a huddle of his players.

“Playing for him and coaching with him,” Johnson said, “just the expectations and the work ethic that he brings to the table and instills in the people that played for him and worked for him, it really makes you feel good to be a part of something like a 100th victory.”

Of course, Wedd’s coaching career was near the start of the town’s split into two high schools. That included managing expectations from the football juggernaut, which won nine state titles from 1984-95.

“You have to take your hat off to coach Wedd for transitioning in that time,” LHS defensive coordinator Adam Green said. “That was a very tough time for football to go from one school to two schools. Being able to manage expectations and not let expectations drop drastically, I’ve always had a lot of respect for coach Wedd and (Free State) coach (Bob) Lisher for that.”

With an opportunity to win his 100th game — which Wedd deadpanned, “I think I win 100 games, but I think I’m the losingest coach in Lawrence High history” — he is still thrilled to coach at his former school.

That includes all of the traditions, expectations and players he has a chance to coach each season.

“I’ve coached here for 28 years,” Wedd said, “and I don’t think I ever drive up 19th Street and think I’m going to work. I think it’s just a gift that the good Lord gave me and try to do the best that you can. That’s all you can do.”