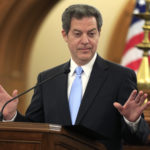 Topeka ? Republican Gov. Sam Brownback is tied to an effort to oust a majority of the Kansas Supreme Court’s justices through his PAC, despite saying that he would not get involved.

The latest campaign finance report for Road Map PAC, which was formed by Brownback, showed that it donated a total of $65,000 to Kansans for Life in September and October. The anti-abortion group’s executive director, Mary Kay Culp, confirmed Tuesday that the money would go toward its campaign to remove the justices in next week’s election, The Wichita Eagle reported.

Abortion opponents want to oust four of the court’s seven justices ahead of a ruling in a pending abortion case. They were appointed by moderate GOP Gov. Bill Graves and Democratic Gov. Kathleen Sebelius. Justices are on the ballot every six years for a statewide, yes-or-no vote on whether they remain on the court.

“We’re thankful for it,” Culp said of the PAC’s contributions to her organization. “I think that they understand more than most people do what’s at stake here.”

Road Map PAC’s three contributions to Kansans for Life came before an Oct. 17 news conference in which Brownback told reporters that he intended “to not weigh in on the races.”

Asked about the contributions on Tuesday, Brownback said they show his consistent support for the anti-abortion movement. Brownback said he stands by his pledge not to make any public statements on the campaign to oust the judges.

“I don’t know what all she (Culp) is using it for,” Brownback said of the contributions.

State campaign finance laws do not require any disclosure by groups opposing or supporting Supreme Court justices. But PACs like Road Map that help elect or defeat candidates in partisan races must file campaign finance reports disclosing all their spending.

The Road Map PAC also contributed $25,000 in July to Kansans for Life’s separate PAC. The PAC has included information about ousting the Supreme Court justices on mailers that also endorse candidates for congressional, legislative and local offices.

The targeted Supreme Court members are Chief Justice Lawton Nuss and Justices Marla Luckert, Carol Beier and Dan Biles. Nuss and Luckert were appointed by Graves, and Beier and Biles were appointed by Sebelius. If they are ousted, Brownback can name their replacements.

Also on the ballot is Justice Caleb Stegall, Brownback’s only Supreme Court appointee. Abortion opponents are not targeting him for ouster.

Road Map PAC’s treasurer, T.C. Anderson, also serves as the Kansas Republican Party’s treasurer. He would not discuss the donations to Kansans for Life.

The abortion case before the Kansas Supreme Court is a lawsuit by two doctors challenging a first-in-the-nation state law enacted in 2015 to ban a common second-trimester procedure. A Shawnee County judge temporarily blocked its enforcement.

The Kansas Court of Appeals split 7-7 on whether the state constitution protects abortion rights independently of the U.S. Constitution so that state courts could overturn restrictions no matter how federal courts ruled.