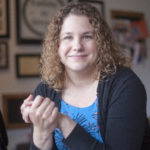 Some Kansas University students filed a discrimination complaint with KU against assistant professor Andrea M. Quenette, who they accused of using racist language, in November 2015.

A Kansas University assistant professor who used the N-word during a class discussion survived a discrimination complaint and investigation, but not the university’s employment review process.

KU will terminate Andrea Quenette, assistant professor of communication studies, at the conclusion of the spring 2017 semester, Quenette told the Journal-World on Monday.

Following her progress toward tenure review — routine for faculty in their third year at KU — the university formally notified her last week she would not be reappointed, Quenette explained.

Quenette, 33, said she “absolutely” believes the decision was based on events of the past year rather than her performance alone.

“I’ve been very powerless throughout the entire situation,” she said. “I still believe that I was assumed guilty, and I had to prove my innocence for all of the issues.”

? Dec. 14, 2015 — KU continues discrimination investigation into professor who used n-word in class; she was not scheduled to teach spring classes

Quenette said she would teach an online communications course this summer and have a research-intensive semester with no teaching responsibilities in the fall. Her duties for spring 2017 will be determined later, she said.

She is undecided what she’ll do after leaving KU but is considering leaving academia and looking at jobs in the corporate sector.

“It didn’t work out the way that I wanted it to,” Quenette said. “I wanted to be able to stay at KU.”

In November, a group of graduate students in the communications studies program demanded in an open letter and on social media that Quenette be fired after she used the N-word during a class discussion about race.

Quenette did not direct the term at any person. Rather she stated that while outward acts of racism had been reported at other campuses, she had not seen “(N-word) spray painted on walls at KU.”

Most but not all of the students who signed the open letter — which listed various other complaints about Quenette, including describing her as racially insensitive, defensive, confrontational, unprofessional and denying of institutional racism — were in the class.

Quenette requested and was granted paid leave while the fallout ensued.

Several students filed racial harassment and discrimination complaints with KU’s Office of Institutional Opportunity and Access, which concluded in mid-March that Quenette had not violated the university’s nondiscrimination or racial and ethnic harassment policies.

However, Quenette said her administrative leave was not lifted — allowing her to return to campus — until Friday. She said College of Liberal Arts and Sciences administrators asked her to remain on leave beyond the investigation’s conclusion and consulted students and other faculty about her in the weeks that followed.

“No other faculty member who went through the same type of review this year had the same types of questions asked about them,” Quenette said. “I don’t think any of the student concerns would have ever come to light had the stuff in the fall not happened.”

Explaining reasons for her non-reappointment, Quenette said the university cited student concerns in the November open letter as reasons she should not teach the basic course, meaning KU would need to hire someone else to do it. The basic course is required for communications graduate students to prepare them for teaching undergraduate public speaking classes.

She said there were also concerns about her research productivity, and department leaders advocated for her to have an extra year to catch up but were overruled.

“Working as basic course director, I was spending so much time and energy on the program I didn’t have as many publications as they wanted me to have,” Quenette said. “And the events of the past year didn’t really help.”

Quenette was previously scheduled for a research-intensive semester with no teaching duties this spring, but being on leave the entire semester meant she was not allowed on campus, which hampered her ability to access resources she needed, she said. She said the investigation also was emotionally difficult and a “huge distraction.”

Quenette said she appealed KU’s decision not to reappoint her through all available channels under university policy but was unsuccessful.

A KU spokesman declined to confirm or elaborate on Quenette’s employment situation.

KU’s policy on promotion and tenure states that promotion is based on “a thorough examination of the candidate’s record and the impartial application of clearly articulated standards pursuant to prescribed procedures.” Factors for consideration include teaching, scholarship and service and “no single source of information, such as peer review letters, shall be considered a conclusive indicator of quality.”

Following progress toward tenure reviews, the policy says, non-reappointment may be justified by poor performance of responsibilities; the academic unit’s plans for future faculty development; by budgetary considerations; or by a departmental, school or college decision that its needs should be filled with a different individual.