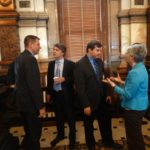 TOPEKA — Kansas lawmakers on Friday night passed a school funding equity bill that they believe will satisfy the Kansas Supreme Court without taking money out of general state aid for school districts.

The spending bill passed the House, 116-6, shortly after 7 p.m. The Senate passed it about an hour later, 38-1, sending it to Gov. Sam Brownback who told reporters he plans to sign it.

“This is something I agree with,” Brownback said. “When I called the special session, my effort was focused on making sure that we could get something to pass that would satisfy the court and keep them from closing the schools. That will happen.”

In its opinion May 27, the court struck down a crucial portion of this year’s school funding formula and gave lawmakers until June 30 to fix the formula. After that date, the Supreme Court indicated it might enjoin distribution of any school aid under a formula it deemed unconstitutional, effectively closing public schools.

The bill reinstates an earlier formula for distributing equalization aid, which is used to hold down local property taxes in lower-wealth districts, and it adds $38 million to that formula to fully fund it.

“Plaintiffs believe this amended legislation represents a compromise which will satisfy the Court and allow schools to open,” said Alan Rupe, an attorney for the plaintiffs in the school finance case, Gannon v. Kansas.

Controversy arose early on over the source of that $38 million. The original bill, negotiated between Republican lawmakers and selected school superintendents, would have gotten $13 million of it by imposing an across-the-board 0.5 percent cut to every school district’s general operating grant.

That would have cost the Lawrence school district an estimated $284,000 in general operating funds.

In addition, the formula change creates a number of winners and losers. Primarily, wealthier districts in Johnson County lose more than $4 million in equalization aid, which means those districts will have to levy higher property taxes next year to generate the money they thought they were going to have.

The Lawrence district, on the other hand, gains more than $1.5 million in equalization aid, which will enable the district to lower its property tax levy.

After it became clear Friday that the original bill could not pass, legislative leaders went back to the negotiating table to come up with another plan.

The one that passed makes no cuts to school districts’ general operating budgets. Instead, it calls for using up to $13 million of any excess proceeds that may be generated through the sale of assets of the Kansas Bioscience Authority.

And if that’s not sufficient, it allows up to $13 million to be taken out of an “extraordinary needs” fund lawmakers had established to help districts that experience unusually sharp enrollment increases or property valuation decreases from one year to the next.

“This is much better. Much better,” said Rep. Barbara Ballard, D-Lawrence, who serves on the House budget committee that produced the bill.

“When I received emails — and I didn’t receive a lot — but when I got those, they were saying, ‘why are they taking the money from us,'” Ballard said.

Other provisions used to generate the $38 million include:

• $10.5 million in tobacco settlement funds that have not yet been allocated.

• $4.1 million in Children’s Initiative Fund money earmarked for a preschool pilot program, although that money will be replaced with federal Temporary Assistance for Needy Families funds.

• $2.8 million through a reduction in state aid for virtual schools, a change that will cost the Lawrence school district nearly $640,000.

• $5 million in fees charged by the Division of Vehicles, with that money going into the extraordinary needs fund to make sure it has at least $13 million available.

• And $2.2 million in other adjustments to the extraordinary needs fund.

But Rep. Tom Sloan, R-Lawrence, said he believes the Legislature will have to revisit this year’s bill again because of continuing, month-to-month revenue shortfalls.

“The Legislature in January will have to revisit this and find different ways to finance it,” he said. “The use of TANF funds, the use of (motor vehicle) funds, those are not sustainable. The decisions as to where the money came from are immaterial because I don’t think revenues are going to be there.”

Brownback, however, said he was optimistic the state will be able to fund the package next year.

“I think we’ll be able to fund it because most of it’s in various places now, but it’s a very tight budget,” he said.

Meanwhile, the proposed constitutional amendment offered in the Senate fell one vote short Friday of the two-thirds majority it needed for passage.

In 2005, lawmakers passed a statute aimed at accomplishing the same thing. But Sen. Jeff King, R-Independence, said the Supreme Court ignored that law when it issued its May 27 opinion suggesting schools could be closed down July 1 if lawmakers fail to enact a constitutional funding system.

But opponents, including Senate Democratic Leader Anthony Hensley, of Topeka, called the measure a “red herring” to distract attention away from the central issue of the special session: fixing the school funding formula.

“If we had taken that vote a couple of weeks ago, that would have passed out of here,” said Sen. Tom Holland, D-Baldwin City. “But folks are hearing from back home. They’re hearing the same thing I am. My constituents are telling me, go to Topeka, fix the problem.”