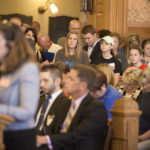 Teachers, school officials, parents and others crowd the doorway of the Old Supreme Court Chambers as school officials provide testimony to the House and Senate budget committees on the issue of school finance funding, Thursday, June 23, 2016 at the Kansas Statehouse. Lawmakers are working on a plan that would provide an equitable solution for funding Kansas public schools.

Topeka ? Kansas lawmakers are preparing to vote on a bill Friday that Republicans say would answer the Kansas Supreme Court’s concerns about tax equity and prevent the court from shutting down public schools on July 1.

In addition, the Senate plans to debate a proposed constitutional amendment that would prohibit both the courts and the Legislature from ever taking actions that would effectively close down public schools.

The school funding bill was introduced on the opening day of a special legislative session that was called to answer the Kansas Supreme Court’s May 27 ruling that said the current funding formula creates disparities that force poor districts to levy higher property taxes than wealthier ones in order to achieve comparable levels of funding.

But Democrats and moderate Republicans complain that the bill does so by taking money out of other education funds. They argue that could create even more constitutional problems about the overall adequacy of Kansas school funding, and they are likely to offer amendments when the bill is debated on the floor of the House and Senate.

Sen. Ty Masterson, R-Andover, who chairs the Senate Ways and Means Committee, said the bill was worked out in a series of negotiations over the last several days among lawmakers, several school district superintendents and officials from the Kansas State Department of Education.

“I don’t see any other viable path that has the votes in either chamber to move forward and make sure the (school) doors are open,” Masterson said.

“That’s what my fear is. I hate to even say that out loud too much because I don’t want to promote that,” she said. “I want this to pass muster, but my fear is that it won’t.”

The bill reflects what many have called the Supreme Court’s “safe harbor” proposal because the court has explicitly said it is one option, but perhaps not the only one, that would pass constitutional muster.

It calls for reinstating an earlier funding formula for distributing equalization aid that subsidizes the local option budgets of less wealthy districts, and adding $38 million to fully fund that old formula.

The $38 million would come mainly out of other education funds, including $13 million that would come from a 0.5 percent cut to every school district’s base operating grant.

It also calls for cutting $4.1 million in tobacco settlement money out of a preschool pilot program, and replacing that with an equal amount of federal welfare dollars; reducing funding for virtual schools by $2.8 million, or $600 per pupil; and sweeping $7.2 million out of the “extraordinary needs” fund, a pot of money lawmakers set aside to help districts that experience sharp enrollment increases or property valuation declines.

The remaining $10.5 million would come from a portion of the state’s share of tobacco settlement money that lawmakers had earmarked to shore up the state pension fund. That was part of a bill that Gov. Sam Brownback vetoed.

According to estimates from the Department of Education, the overall net effect on the Lawrence school district would be an increase of $1.27 million in state funding. But that would all go toward lowering the district’s local property tax levy, not providing additional spending authority for the district.

In fact, Lawrence stands to lose more than $923,000 in general operating funds through the cut in base funding and the reduction in virtual school aid.

Most of that is due to the change in virtual school funding. For the upcoming year, the original budget lawmakers passed called for a $600 per-pupil increase for virtual schools. The Republican-backed bill would eliminate that increase, which would have meant an additional $640,000 for Lawrence.

During a joint hearing before the House and Senate budget committees, superintendents from some of the state’s largest school districts — Wichita, Blue Valley, Olathe and Shawnee Mission — all spoke in favor of the plan, even though it does not contain a so-called “hold harmless” provision that would have protected the three large Johnson County districts.

Todd White, superintendent of the Blue Valley district, which stands to lose $2.9 million under the bill, said his district was willing to accept that loss for one year in exchange for keeping schools open.

“We have carefully weighed and discussed the issues and options before us and believe this plan — given the late hour and dire circumstances — is a plan that can work for the 2016-2017 school year,” White said.

But other districts were not so quick to jump on board, including the Kansas City, Kan., district, which is one of the plaintiffs in the school finance lawsuit.

“We made no agreement. We are not endorsing,” Kansas City Superintendent Cynthia Lane said. “We are asking that they look at all options and leave cutting schools to be the last point.”

The Wichita district’s endorsement of the plan angered some Wichita-area legislators, including Democratic Rep. Jim Ward, who commented angrily about it on Twitter.

“Next time u hear anyone from (Unified School District) 259 talk about failure of #ksleg to fund schools know when it was their turn to fight for funding they caved,” Ward posted.

Meanwhile, outside the Statehouse, about 150 demonstrators rallied to urge lawmakers to pass something quickly in the special session to prevent a shutdown of public schools.

“My fear is that the ultra-conservative Republicans are going to either only offer up ways to pull funding from other essential services, which would be so unpopular that it would villainize everyone who’s in support of public schools, or that they just won’t do anything,” said Becky Plate, a mother of two Eudora High School students, who attended the rally.

“I’m very concerned,” she said. “I think that this whole thing is so political, people don’t care about the kids or their teachers. It’s just about their side winning.”

Sen. Marci Francisco, D-Lawrence, who serves on the Senate Ways and Means Committee, said she was frustrated that most lawmakers had no information about the bill prior to the hearing Thursday morning.

“We heard mostly from people who were part of the discussion coming up with the bill, so I’m not surprised that we heard a lot of support for that,” she said.

Rep. Barbara Ballard, D-Lawrence, who serves on the House budget panel, said she was skeptical about the cuts to early-childhood programs that were part of the package, but she acknowledged that the money would have to come from somewhere.

“Somebody’s going to have to be cut in order to find the money,” she said. “I’m not sure this will be the final plan.”

Both Democrats and moderate Republicans have alternative versions of the bill that they may offer in the form of amendments during floor debate Friday.

Instead of taking $13 million in general aid to school districts, they call for taking money out of what they say is an underutilized job creation fund within the Kansas Department of Commerce and from a modernization program in the Department of Revenue’s Vehicles Division.

The moderates’ plan would also leave the extraordinary needs fund intact, turn it over to the Kansas State Board of Education to distribute and add another category of eligibility by making it available to districts that lose substantial amounts of money through the change in funding formulas.

Two identical versions of the GOP bill were introduced in the House and Senate, and both passed out of their respective budget committees without changes.

The House is expected to debate the funding bill first shortly after it comes into session at 9 a.m. Friday.

The Senate is expected to debate its proposed constitutional amendments in the morning, although House leaders say their members have almost no interest in debating it during the special session. It plans to debate the school finance bill later in the afternoon.

? A spectator’s guide to the special legislative session(By Peter Hancock)