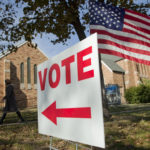 Topeka ? The U.S. Justice Department said Monday that a federal agency director erred last month by issuing new federal voter registration forms that require voters in Kansas, Alabama and Georgia to show proof of U.S. citizenship, and that it would not defend the action against a lawsuit filed by voting rights advocates to block the action.

“The United States concedes that, because the challenged actions were not made on the basis of the (National Voter Registration Act’s) ‘necessity’ criterion, defendants cannot succeed on the merits,” the Justice Department said.

On Jan. 29, Brian Newby, executive director of the U.S. Election Assistance Commission, unilaterally granted requests by the three states to provide them with amended voter registration forms asking applicants to provide proof of U.S. citizenship. The four-member bipartisan commission had previously refused to grant such requests.

Under the NVRA, also known as the federal “motor voter” law, the Justice Department said, Newby did not make the required finding that the amended form was “necessary to enable the appropriate State election official to assess the eligibility of the applicant and to administer voter registration and other parts of the election process.”

Meanwhile, though, the conservative Public Interest Legal Foundation filed a motion seeking to intervene in the case to defend the EAC’s action.

“The Obama Justice Department has shown a clear hostility towards ensuring voter integrity,” said J. Christian Adams, president and general counsel for the Foundation. “Non-citizens have participated in American elections and instead of seeking to prevent it, the Department of Justice enables it. Too much is at stake in 2016 to allow this to continue.”

Both documents were filed in response to a lawsuit by the American Civil Liberties Union, the League of Women Voters and other state and national voting rights advocates who are seeking to block the EAC from issuing federal voter registration forms that would require voters in Kansas and two other states to show proof of citizenship.

On Saturday, speaking at the Kansas Republican Party’s state convention in Overland Park, Secretary of State Kris Kobach said he would also seek to intervene in the case. He said he had heard through “back channels” that the Justice Department was not going to defend the new registration forms, and he called the ACLU and League of Women Voters “communists.”

Monday’s court filings were just the latest chapter in a long-running series of legal actions involving the state’s proof-of-citizenship law, which took effect in 2013.

Under that law, people registering for the first time in their county must show proof of citizenship to register. But until recently, that only applied to voters who attempted to register using the state’s voter registration form. Since it took effect, more than 32,000 voters who attempted to register using the state’s registration form have had their applications placed “in suspense” for failing to provide the citizenship proof. Thousands of those applications have since been canceled entirely because the applicants did not provide the documents after more than 90 days.

In June 2013, the U.S. Supreme Court ruled in an Arizona case that the Motor Voter law superseded state laws requiring proof of citizenship and that states were still required to accept and use the federal registration forms, which do not ask for citizenship proof, at least in administering federal elections. It also said states such as Arizona and Kansas could ask the EAC to provide them with amended federal forms that reflect their unique state laws.

Kansas and Arizona then made those requests, but the EAC initially declined. The states then filed a federal suit, but in 2014 the 10th Circuit Court of Appeals upheld the EAC’s decision, and the U.S. Supreme Court later refused to hear further appeals.

Most people who apply to register do so using the state form because that’s the one typically used by the Division of Vehicles when people renew their driver’s licenses, and the one available in other state and local government offices. But a small number have registered using the federal form, according to the secretary of state’s office, and those people have been allowed to vote only in federal elections.

In January, though, a district court judge in Topeka struck down Kobach’s policy, saying he had no legal authority to maintain separate voter registration rolls or administer “bifurcated” elections. That case is now on appeal before the Kansas Court of Appeals.

Then later in January, EAC Director Newby acted on his own to grant requests from Kansas, Alabama and Georgia to provide them with amended federal forms asking for proof of citizenship, even though the commission had not authorized him to do so.

Before being hired at the EAC, Newby had been Kobach’s appointed election commissioner in Johnson County.

Another suit, filed by the ACLU, seeks to block the Department of Revenue’s Division of Vehicles from using the state form when people register to vote as they’re applying for or renewing their driver’s license.