Hundreds of folk musicians flock to Kansas City for convention 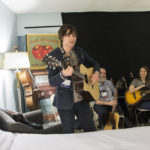 Squeezed for space in the corner of a Westin Hotel bedroom, singer-song writer Matt Nakoa, performs with other Kerrville Folk Festival-winning song writers, during a private showcase inside the Westin Hotel at the Folk Alliance International Conference in K.C., MO. that runs through Sunday. Nakoa will be the the Americana Music Academy Artist-in-Residence in Lawrence, February 22 - 24 for a songwriter's workshop master class and a few private lessons, culminating with a house concert on February 24 at 7 p.m.

For the third year in a row, Kansas City, Mo., is hosting the Folk Alliance International Cultural Crossroads conference through Saturday at the The Westin Kansas City at Crown Center hotel, 1 E. Pershing Road. More than 1,100 musicians are performing for the public and for music industry folks looking to book talent.

In addition to the official showcases that feature 56 performances on nine stages each night, people can sign up for Music Camp and one of 30 music workshops daily, including everything from learning ukulele to writing songs. The public evening showcases are sold out, but you can walk in and sign up for the Music Camp. For ticket availability and information, go to folk.org. The convention will return to Kansas City in 2017.

Joni Fornelli, of Lawrence, attended a Celtic fiddle workshop Thursday at Music Camp and attended late-night private showcases Wednesday. “It’s like being in a music playground for three days,” Fornelli said. At night, three floors of hotel rooms are dedicated to showcases. “I just love being able to explore different musicians until 2 or 3 in the morning. It’s like a music salad.”