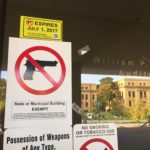 Topeka ? The Kansas Board of Regents on Wednesday approved all six state universities’ policies for implementing campus concealed carry, which goes into effect this summer.

The policies don’t list specific buildings, areas or events where universities might prohibit guns, but do allow for those to be designated later.

Schools that choose to do so must present the Board of Regents with proposals listing such buildings, areas or events.

“I imagine we’ll be seeing those over the next few months, if universities determine that they’re going to do that,” said Julene Miller, an attorney for the Board of Regents.

Regent Shane Bangerter said the governance committee would consider each request and, if deemed necessary, bring requests before the full board.

The Kansas Personal and Family Protection Act says that state universities must allow lawful concealed carry of handguns on their campuses beginning July 1. As with anywhere in the state, people carrying concealed guns must be at least 21 years old, cannot be under the influence of alcohol or drugs and can’t be convicted felons, among other restrictions.

Under the law and the statewide Board of Regents policy, in order for universities to prohibit people from taking guns into any building, that building must be equipped with adequate security measures such as metal detectors and guards. Those could be permanent or temporary measures set up for certain events.

A section of the law also allows universities to prohibit people from carrying guns into “restricted access” areas.

University of Kansas attorneys have said that areas beyond the lobby of on-campus child care centers — where only employees and parents are allowed, not the public — are likely to be one such place. Parents would be pre-screened and told that guns aren’t allowed in the child care areas.

Another example might be the brain imaging center at the KU Medical Center. No metal objects of any kind are allowed around the multi-million dollar magnetic imaging equipment used there.

• Stun guns also will be allowed on campus, but no one but law enforcement can carry the name-brand and more powerful Tasers.

• Concealed guns must be on the person of the carrier at all times. Specifically, any backpack or purse containing a concealed gun must be “physically on or in the hands of the person carrying it.”

• Guns being taken into a building must be in a holster with the safety on. Holsters must completely cover the gun’s trigger area and have sufficient tension to keep the gun in the holster “even when subjected to unexpected jostling.”

• No one “shall use the fact of possibility that he or she is carrying a concealed weapon with the intent to intimidate another person except in defense of self or others.”

Board of Regents policy applies to everyone on campus, including requirements that guns stored in cars must be hidden from view and that guns in residence halls must be contained in secure storage devices when not on the person of the carrier.

Q & A on campus carry

Here are some questions and answers about the Kansas law:

Republican Gov. Sam Brownback signed a law in 2013 requiring concealed carry of handguns to be allowed in all publicly owned buildings unless the owners provide adequate security to prevent anyone from bringing weapons in. Cities, counties and public colleges and universities were allowed to exempt themselves until July 1, 2017.

WHO WILL BE ALLOWED TO CARRY CONCEALED WEAPONS ON CAMPUS?

Anyone over the age of 21, including students, faculty, staff and visitors. Kansas does not require people to have a license or training to carry a concealed weapon. The universities’ policies include restrictions for those who are under the influence of drugs or alcohol, mentally ill or those with felony convictions.

The policies also state that anyone carrying a concealed weapon on campus must be in control of the handgun and keep it secure on his or her person when it’s not in use. Concealed handguns must be in holsters and handguns with an external safety must have the safety on at all times. If the weapon is in a backpack, gun or purse, those items must be on or in the hands of the person at all times. Handguns cannot be stored in any university classroom, office or facility, in any residential unit that does not belong to the gun’s owner, or in an unlocked or unattended vehicle. People who live on campus must keep their guns in university-approved storage devices.

ARE THERE ANY RESTRICTIONS ON WHERE GUNS WILL BE ALLOWED?

The policies allow for guns to be restricted in areas that have no public access or require entry through key cards or special codes. So, for example, guns will continue to be prohibited at a nuclear reactor at Kansas State University because public access has always been restricted there.

Officials have raised concerns about allowing guns in areas such with combustible materials, such as chemical or engineering laboratories that store pressurized gas cylinders and rocket fuel. However, Kansas Attorney General Derek Schmidt has said universities can’t ban handguns from those places.

HAS THERE BEEN ANY OPPOSITION?

Faculty and student organizations at the universities have generally been strongly opposed to guns on campus, and the Lawrence-based Kansas Interfaith Action has said it plans to lobby the Legislature to change the law in the next legislative session.

Opponents say allowing concealed guns won’t make campuses safer. Some people are concerned that students and professors wouldn’t be comfortable discussing controversial subjects if they think there might be a gun in the room.

Supporters such as the National Rifle Association argue that lawful gun owners should be allowed to carry on campuses for self-protection. They argue that having more law-abiding citizens with guns could potentially deter mass shootings or allow bystanders to intervene to limit the deadly consequences.