Lions ready to start back up 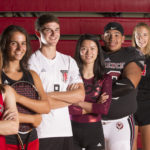 After training throughout the summer, athletes at Lawrence High are excited to showcase their potential in the upcoming days and weeks.

The LHS boys soccer team opens play today and nearly all of the other programs start in the next week. Here is a look at all of the Lions’ fall sports programs:

It will be a year of change for 18th-year Lawrence High football coach Dirk Wedd.

After winning their first Sunflower League title since 1993, the Lions will have a different look. They will feature a no-huddle offense and play in a platoon — where no player takes significant snaps on both sides of the ball.

The Lions won’t have many returning starters, but that doesn’t mean they completely lack experience.

“We practiced against the No. 1 team in the state most of last season,” Wedd said.

On defense, the Lions have a good amount of varsity experience with linemen Jacob Unruh, Mark Greene and BJ Murry, linebacker Santino Gee and defensive back James Reeder.

“Right now they are practicing with a chip on their shoulder,” Wedd said. “They want to prove they can be successful.”

Lawrence will open the season against Shawnee Mission Northwest on Sept. 2 at LHS.

Last season was a banner year for Lawrence’s gymnastics team, winning its first meet in four years and eventually placing fifth at the state meet.

The Lions, coached by Brooke Kissinger, only lost one senior and are primed for another big season highlighted by returning senior Jordyn Leon, junior Eliana Seidner and sophomores Eden Kingery and Klara Hinson.

Kingery took seventh in the vault and 11th all-around in the Sunflower League meet last year.

The Lions will start the year at the LHS quadrangular on Sept. 7.

It was a slow start last year for Lawrence’s boys soccer players, failing to score a goal in the first four games on their way to a 4-12-1 record.

The Lions are confident their offense will be much improved to start the season and it will pay off with more victories.

“A lot of experienced varsity players return, it is a very motivated group of players,” seventh-year coach Mike Murphy said.

Along with the returners, Murphy is confident that Ben Matthews can make a big impact this season.

LHS opens against Manhattan at 7 p.m. today at LHS.

Looking to put last season’s 8-29 record in the rear-view mirror, Lawrence’s volleyball players have a good mix of returners and newcomers to do some damage this year.

Among the newcomers, the Lions are hoping outside hitters Baylee Unruh and Katelyn Mask, setter Laura Willoughby and libero Lauren Maceli can make big contributions at the varsity level.

“We have strong returning leadership in Lexi Anglin, Amelia Dunlap, Olivia Morgan and Laurel Bird, as well as a full staff of newcomers that are ready to compete,” 10th-year coach Stephanie Magnuson said.

The Lions will start the season on the road Tuesday against Blue Valley Northwest, last year’s Class 6A state runner-up.

During the summer, first-year cross country coach Laura Koster said her main goal was to send more than one runner to the Class 6A state meet.

One of the main reasons for optimism a large group of returning varsity runners. For the girls, they will be led by sophomores Morgan Jones, the school’s lone state qualifier last year, and Anna DeWitt. Leslie Ostronic and Kiikto Thomas are also expected to compete at a high level this season.

For the boys team, Darius Hart and Garrett Prescott are expected to be the top two runners and have “represented strong leadership” throughout the summer and first few weeks of practice, according to Koster.

“The kids have done a great job adjusting to a new coach,” Koster said. “They have persevered through a lot of change.”

After spending most of last season with only two golfers in the program, Lawrence’s golf team is excited for the future.

“Our increase in numbers, and returning state qualifying player,” second-year coach Jennifer Schmitt said. “We also look forward to a few returners to moving toward competitions at both the JV and varsity levels.”

The Lions have 10 golfers this season, but sophomore Beatrice Lopez is the only golfer with varsity experience after she qualified for the 6A state tournament last year.

Along with Lopez, the Lions are hopeful Emily Johnson, Sarah Ramaley, Samantha Torres and Clara Severn can work their way toward the varsity level.

The first leg of the Sunflower League tournament begins at 1 p.m. Monday at Lake Quivira.

It will be more of a rebuilding year for Lawrence’s girls tennis team this season.

Senior Natalie Cote, who qualified for the state tournament last season in doubles, is the school’s only varsity returner.

“Our biggest challenge this season is to figure out (who) our top six players are and who plays singles and doubles,” Marshall said. “It should be a fun, exciting process.”

LHS will start the year at the Leavenworth quadrangular at 3:30 p.m. Thursday.