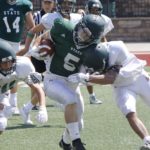 At the end of the first week of practice, Free State High football coach Bob Lisher compared his team’s intra-squad scrimmage Saturday to a mid-term test.

It was an opportunity for coaches to watch players on film and see them play in a full-contact, full-speed environment.

The Firebirds rotated through their varsity, junior varsity and freshman offenses and defenses throughout their two-hour scrimmage at FSHS, which included plenty of watermelon to eat for all of the players afterward.

“This is a big time test for all of them,” Lisher said. “I told them the depth chart will change a little bit after today. Then we’ll do it again Thursday night at the jamboree.”

The Firebirds certainly had their highlights on both sides of the ball. Senior receiver Zack Sanders caught two touchdown passes from senior quarterback Dallas Crittenden, and junior running back Gage Foster ran for a long touchdown. Sophomore Cameron Dillon added a long touchdown catch at the end of the scrimmage on a pass from backup quarterback Jordan Preston.

Crittenden, who transferred from Topeka Hayden in March, is expected to be the starting quarterback for the season opener against Shawnee Mission West on Sept. 2.

On defense, senior Drew Wise made a pair of tackles in the backfield, linebackers Jay and Jax Dineen caused havoc at the line of scrimmage and junior David Johnson made some strong tackles from the secondary.

“It feels really nice to get out here and just hit,” Wise said. “Full contact, full pads and be able to take (ball carriers) to the ground, it feels great.”

Lawrence’s scrimmage featured plenty of action for the team’s starting offense against its starting defense.

“It’s the first time that they’ve really been filmed and evaluated,” LHS coach Dirk Wedd said. “The depth chart on Monday comes out and it will open some eyes. It’s not a good day for a head football coach because every time something good happens on the offense, you go, ‘Well that’s good, but what happened on the defense?’ You’re kind of sitting there always wanting more.”

The scrimmage gave the Lions a chance to showcase their new no-huddle offense in a full-speed, full-contact setting. Coaches called in plays from the sidelines and players checked their wristbands so that they were all on the same page before quickly snapping the ball.

“If the coach could figure it out, it’d help a lot,” Wedd joked. “Yeah, we’re getting the hang of it. Kids obviously enjoy it. We actually have different speeds, so you can really crank it up where if you get the defense on their heels.”

Senior running back Trey Moore added: “It was good for the first time live. We got the hang of it.”

After looking back at how much the team has progressed in the past week, the Lions are excited to see how much they can improve before their first game.

“This was a good practice before the first week of games,” Moore said. “Receivers stepped up big on their blocking assignments. (Offensive line) got so much better, the holes were bigger and they were working hard. Things are coming together.”