Came to pass: Lions air it out in rout of SMNW 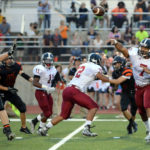 LHS quarterback Alan Clothier gets a quick pass to the air early in the first half in the Lions' 41-6 victory over SM Northwest on Thursday, Sept. 24, 2015, in Overland Park.

LHS senior quarterback Alan Clothier made sure the plan worked like a charm.

Clothier tossed for two touchdowns — and had just one incompletion in 12 attempts — helping the Lions roll past the Cougars, 41-6, at SM North District Stadium.

The Lions (4-0) scored on their first three offensive possessions. The only time they couldn’t get in the end zone in the first half was when the clock ran out before halftime.

“We knew that they were going to try to shut our running (game) down,” said Clothier, who tossed for 147 yards. “We knew we were going to have to pass this game. We just really worked on passing a lot this week. It worked out for us.”

Clothier extended the first LHS drive with a 25-yard completion to senior tight end Price Morgan. Senior running back JD Woods ran the rest of the way, finishing with a seven-yard touchdown run.

The 6-foot, 200-pound Clothier finished the second drive when he tossed a short bubble pass to sophomore Dante’ Jackson at the line of scrimmage. Jackson did the rest of the work, fighting his way to the end zone for a 17-yard touchdown reception.

“We worked on the passing game a little bit this week,” Morgan said. “We got a couple of new plays in. We just thought it would be a good week to execute them and do what we did.”

Following a 58-yard kick return by Jackson in the middle of the second quarter, Clothier took advantage of a short field with a 10-yard completion to junior running back Trey Moore and a 20-yard touchdown strike on a post route to Morgan for a 28-6 lead.

“We’re trying to figure out the best way to score a bunch of points. That’s the whole point,” LHS coach Dirk Wedd said. “Being more balanced than we have been is very beneficial. (Clothier) is throwing it well, and we’ve got a bunch of kids who can catch it.”

The Lions also wanted to limit touches for Woods, who started in the secondary after a couple of injuries. Enter “Big Play Trey” Moore, who rushed for 96 yards on six carries. Woods, the Sunflower League’s leading rusher, finished with two touchdowns and 96 yards on 16 carries.

“It’s unbelievable,” Wedd said. “Trey just stepped up and did a good job. But Trey could start for pretty much any other program in the Sunflower League, probably.”

But offense wasn’t the only area where the Lions dominated Thursday. Senior defensive end Amani Bledsoe blocked a punt in the second quarter, and junior Erik Shackelford picked the ball up and ran it into the end zone, the second blocked punt touchdown for Shackelford this season.

The Cougars (1-3) only had 69 rushing yards on 21 attempts, struggling to run past Lawrence’s linebackers.

The Lions’ defense, one possession after allowing a 65-yard touchdown catch to SMNW receiver Gerrit Prince, made a goal-line stand at the three-yard line. LHS linebackers Tanner Green and Konner Kelley provided pressure on blitzes and Jackson knocked away a pass on fourth down.

In the second half, the Cougars only had four plays across midfield, but a sack by LHS senior defensive Trey Georgie and a pass deflection by Woods ended the threat.

“They are heat-seeking missiles,” Wedd said of his linebackers, Morgan, Kelley and Green. “Those three linebackers, they don’t try to tackle you, they try to hurt you. They’re very aggressive, and that makes for a good defense.”

The Lions put backups on the field for most of the second half, and junior James Reeder took full advantage. He ran for a 27-yard touchdown in the third quarter on his first carry of the game and added an interception in the fourth quarter.

“I didn’t expect them to block so well,” Reeder said of his first varsity score. “I just felt amazing. That was great.”