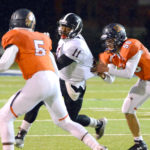 After a reverse across the field, JD Woods is pulled down by the jersey as Lawrence High played Olathe East Friday at CBAC.

Olathe ? A foregone conclusion became reality Friday night at College Boulevard Activity Center, where Lawrence High’s football team finished its regular season undefeated, earning the No. 1 seed on the eastern side of the Class 6A playoffs bracket with a 47-8 drubbing of Olathe East.

The Lions officially earned a district title, too, a week after essentially locking it up with a thrilling, last-minute victory over Olathe North.

The way this LHS train rolled through the season, the overmatched Hawks (3-6 overall, 0-3 districts) didn’t figure to stand much of a chance against the Sunflower League champions. The Lions and senior running back JD Woods, who tied a career high with 294 rushing yards, made sure to enter the postseason without showing even a hint of regression.

“I loved the way they came out,” LHS coach Dirk Wedd said of a 28-0 first half in which his team abused O-East on both sides of the ball. “I was a little worried because of the weather and nobody in the stands — in fact, we had more people than they did — and I was just worried about them showing up. But I shouldn’t, because they’ve got some big-time goals out there, and this was just one more step for them.”

On a cold, rainy night, LHS (9-0, 3-0) realized it had the beef up front to plow over Olathe East, so offensive linemen Trey Georgie, Jacob Unruh, Mark Greene, Ethan Taylor and Amani Bledsoe came in with their mouths watering.

Said senior left tackle Georgie: “We had a lot of fun. It’s big-boy weather here. Big boys like to play in cold weather when it’s raining. We came out, we handled business.”

Woods, who scored four rushing touchdowns, came up with his most impressive game-breaker late in the second quarter. Already up 21-0, LHS began a drive pinned inside its own five-yard line with less than a minute and a half to go until halftime. No play call is conservative when Woods is in the mix, and the 5-foot-7 speed demon took off for a 96-yard TD on first-and-10 before the Hawks knew what hit them.

By now, Wedd is used to his star back’s explosive ability.

“It’s unbelievable how quick and fast he is,” the LHS coach said, before chuckling. “You give him an inch and he’ll take a mile. He’s done it all year. And those guys up front, they know all they’ve gotta do is get him to the second level and it works out fine.”

Woods gave the nod to a couple of his massive blockers for that highlight.

“I followed Trey and Amani on that one and I just cut right off of Trey’s butt,” Woods said. “The line did a really good job tonight, and I couldn’t ask for a better line.”

Likewise, Georgie said the Lions love having a running back with such big-play ability.

LHS looked just as nasty on defense, holding O-East to 32 yards and two first downs in the first half. By the end of the night, the Hawks had just 138 yards and nine first downs, even though Lawrence played reserves much of the second half.

While Woods’ monstrous second-quarter run gave Lawrence a 28-0 advantage entering the final half, Woods said the Lions didn’t want to feel satisfied, because they learned last week against O-North that even a three-score lead in the fourth quarter isn’t necessarily a sure thing.

“We wanted to come out and play the way Lawrence High plays,” Woods said, “and that’s with a chip on our shoulder.”

The Lions hope, Georgie said, the fun is just getting started, as they head into the postseason.

“We have a lot of momentum, but we’re not going to underestimate anybody,” Georgie said. “Everybody has a shot to win this thing.”