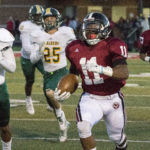 On the first play from scrimmage, Lawrence High senior running back JD Woods breaks through the Shawnee Mission South defense for a 70 yard touchdown run during their game Friday night at LHS. The Lions won, 42-6, and improved their record to 5-0 on the season.

In the morning before Friday’s football game against Shawnee Mission South, Lawrence High coach Dirk Wedd told senior running back JD Woods that the first play on offense was going to him on a toss play.

They couldn’t have planned it any better. Woods took the ball and ran 70 yards down the LHS sideline for a touchdown, starting a huge day for Woods in a 42-6 blowout victory at LHS in the school’s homecoming game.

Woods, the electric 5-foot-7, 180-pounder, finished with 257 yards and four touchdowns on 12 carries, averaging 21.4 yards every time he touched the ball. It’s the second time this season he’s run for a long touchdown on the game’s first play.

“JD is one of a kind,” senior lineman Trey Georgie said. “He is so fast and explosive. When we saw him running down the sideline, we knew he was going to score.”

Woods also had another touchdown run called back by a holding penalty, which eventually turned into a one-yard score on a sneak by LHS quarterback Alan Clothier.

“Receivers … best blocking corps that I could ever ask for,” Woods said. “They just do a really good job blocking. I credit them and our coaches for getting that play set up like that.”

Woods ran a 100-meter dash in 10.73 seconds during track last spring, the third-fastest time in the state. Once he breaks into open field, he speeds past the defense and celebrates with a salute once he’s in the end zone.

“The thing about 10.7 — that’s track speed, but he’s fast football speed,” Wedd said. “Some track guys when they put the pads on, they slow down. He frickin’ speeds up. He’s a true burner.”

With Woods providing the highlights on offense, the LHS defense dominated with its linemen and linebackers. The Lions, who had a big size advantage on both sides of the line, allowed only 18 total yards in the first half with plenty of tackles in the backfield.

“Just played football,” Kelley summed up. “Just have to be mean. Everyone did their job and we succeeded obviously.”

In the third quarter, the Raiders (0-5) had two drives near midfield, but both stalled when Lawrence’s linebackers and defensive backs made tackles in the backfield. Senior cornerback J’Mony Bryant had two stops when SM South tried to run option plays.

“The coaches are setting us up to succeed,” Kelley said. “Just the backers — we call ourselves “The Reapers” — we have to buy in and it’ll pay off.”

The final play took away a shutout from the Lions, but couldn’t touch their confidence.

“Once (we get) that first score of the game, we find our rhythm,” Kelley said. “We just keep kicking. We’re like a train that don’t stop.”