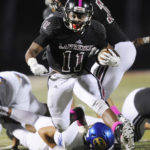 Lawrence senior JD Woods heads into the end zone for his fourth first-half touchdown in a 63-7 victory over Olathe South on Friday, Oct. 9, 2015, at LHS.

Two wins away from a spot in the Class 6A football state championship game, Lawrence High senior running back JD Woods is only focused on his next game.

But his past 10 games will go down in the record books.

Cosey set the previous career and single-season rushing records while sharing the backfield with Adam Green, who nearly ran for 1,000 yards in ’91.

“I always thought Michael Cosey was the best player that I’ve ever seen in my entire life, and I’d probably still say that,” said Green, Lawrence’s defensive coordinator. “But JD is definitely right up there.”

Woods, a state runner-up in the 100-meter dash last spring, is a faster back than Cosey. But they both are competitive — just in different ways.

Woods is only the third running back in LHS history to surpass 3,000 career rushing yards, joining Cosey and Brandon McAnderson, a 2003 grad. Before Lawrence split into a two-school town, it was nearly impossible for a sophomore to play with the varsity squad.

McAnderson later ran for more than 1,000 yards during his senior season at Kansas University, helping the Jayhawks to an Orange Bowl victory in 2008. He’s now an assistant coach at Shawnee Mission South and saw Woods run for 257 yards and four touchdowns against his team last month.

“He scored first play of the game, and it’s something as small as taking a bad angle,” McAnderson said of Woods. “You take a bad angle, that’s it. That’s the only chance you have. You’re off on your aiming point, and he’s out of there.”

McAnderson closed in on Cosey’s records during his senior season but finished just 65 yards shy of the single-season record. It was special for McAnderson because he looked up to Cosey as a kid. His dad, Ramon, coached Cosey in little leagues.

“(Cosey) was one of my young heroes,” McAnderson said. “Adam Green, I remember those two. That was like Marcus Allen and Bo Jackson to me.

It was also a chance for Woods to honor his grandfather. He never thought he would have a chance at the record because he always expected to split carries in the backfield.

“My granddad, before he died, he’d always just tell me to be the best football player I could be,” Woods said. “Right after football season my sophomore year, he passed away. I just have been doing everything for him lately.”

Woods is thrilled he broke the records, but for now, he doesn’t have time to take his focus away from a state title. That was the same mindset for McAnderson, who lost in the state quarterfinals during his senior season.

“You’re always chasing that (state title),” McAnderson said. “It’s always bigger than any individual accomplishment. It’s not just something you say. You feel it.”