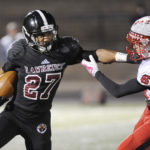 When Lawrence High’s football team has struggled to score points this season, the defense has stepped up with big plays to bail the offense out. On Friday, the Lions’ offense returned the favor.

In a game with more than 1,000 yards of offense, the Lions won the shootout and advanced in the Class 6A state playoffs with a 56-32 victory over Shawnee Mission North at LHS.

The top-ranked Lions (10-0) produced 560 yards of their own with an accurate passing attack and their usual dominant run game, scoring on their first three drives.

“There’s been games where the offense hasn’t been doing too well, and the defense has stepped up,” LHS senior quarterback Alan Clothier said. “I knew tonight was going to be one of those nights that we were going to have to step up, and we did.”

The Indians (3-7) trailed by only 10 points midway through the third quarter following a 10-yard touchdown run by SM North junior running back Marco Garcia, who finished with 137 yards.

But every time the Indians tried to claw back, the Lions responded with a score. LHS senior running back JD Woods ran for a six-yard touchdown for a 35-18 advantage in the third quarter.

On the next defensive possession, the Lions forced a three-and-out and SM North’s first and only punt of the game. LHS senior lineman Trey Georgie partially blocked the punt, giving the Lions a short field.

Three plays later, Woods was running into the end zone for a 12-yard touchdown. Woods ran to his right on the play, saw he didn’t have a hole open, and ran backwards while reversing course to the left side of the field before a big block from Clothier gave him enough separation to run past would-be tacklers.

Woods led the Lions with 186 yards and four touchdowns on 18 carries, and senior Peter Afful added a 51-yard touchdown run on his only carry in the fourth quarter.

However, the Lions had trouble stopping SM North junior quarterback Will Schneider, who tossed for 323 yards and three touchdowns. He avoided the LHS pass rush with quick three-step drops, and he had the agility to bounce around the pocket for extra time.

Schneider ran for 120 yards, including a 70-yard touchdown in the fourth quarter.

Clothier did his best to match Schneider, tossing for 199 yards and two touchdowns on 10-of-13 passing. He threw a 32-yard touchdown to senior tight end Price Morgan over the middle of the field on the first drive of the game and connected on a 61-yard touchdown pass to senior receiver J’Mony Bryant in the fourth quarter.

“We’ve worked very hard on it,” LHS coach Dirk Wedd said of the passing game. “In practice, we spend 20, 30 minutes … just throwing the ball. I feel comfortable. Alan can throw it.”

In the first half, the Lions took advantage of two fumbles, one forced by Morgan and another recovered by Morgan. Senior linebacker Tanner Green also made a tackle on fourth-and-one at midfield to force a turnover on downs.

The Lions know they’ll need to clean up their defensive performance in the state quarterfinals next week but were thrilled to move on to the second round.

“It’s great. I haven’t won a playoff football game since I’ve been in high school,” Morgan said. “We’ve been talking about going to the state championship ever since we got here. This is just one step along the way, so I’m really excited.”