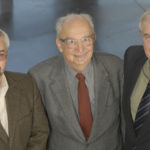 This file photo from 2007 shows Journal-World Academic All-Star Judges, from left, Rand Ziegler, Baker University dean of the College of Arts and Sciences; Austin Turney, former Lawrence school board member; and Robert Harrington, Kansas University professor in the department of psychology and research in education.

Robert Harrington has been a judge for the Academic All-Star program since its inception in 1997. In this kind of competition, 4.0 GPAs are rather commonplace.

But perfect ACT and SAT scores? Never before had he seen so many in one year.

In the field of 10 finalists, two students went unscathed after taking the ACT, while another swept the SAT.

“We sometimes will go years where we don’t have a perfect score,” he said. “We had several. They’re knocking the socks off the standardized tests. I think we were all kind of amazed with that.”

Harrington, a professor of psychology and research in education at Kansas University, was joined on the panel of judges by Rand Ziegler, the vice president and dean of the College of Arts and Sciences at Baker University, and Austin Turney, a retired accounting professional and former Lawrence school board member.

The judges often express how difficult it is to whittle the field of nominees to 10 finalists, and this year was no different. Harrington said all 26 nominees were “worthy of winning.” But ultimately, he said, the panel didn’t have many disagreements on selecting this year’s All-Star team.

As part of their applications, students had to write an essay about the relevance of newspapers in an increasingly digital society.

“The essays in general were good,” Harrington said. “There were only a couple of students who saw the demise of newspapers to be inevitable, whereas most of them felt there was definitely a place for online reading of news as well as newspapers.”

Harrington said he was also pleased with the diversity of the students. There are no rules stipulating how many women or men can be chosen, but this year it was split down the middle. Two of the area’s smaller schools, Eudora High and Ottawa High, each had two students named to the team.

Harrington called that “wonderful,” since “some schools, they just don’t have as many opportunities because of the size of the school.”

He also made sure to note that there are many students in the area not even nominated who have done fantastic work and will continue to do so.

“You can only nominate so many,” he said. “We assess kids with paper and pencil. Not everybody does well with that.”