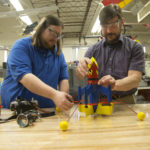 KU mechanical engineering doctoral student Richard Bramlette, left, and associate professor of aerospace engineering Ron Barrett-Gonzalez prepare to fly a drone they developed inside an aerospace lab at Learned Hall. The patent-pending XQ139A drone, nicknamed “Robby” and painted like a Jayhawk, was designed to be flown for fun. A similar B model envisioned for police and military use is not yet ready to debut, they said.

Unlike with commercial drones, the lack of collision-avoidance technology isn’t a deal-breaker on most drones that are just for fun.

Kansas University engineers are creating those, too, including one prototype flown publicly for the first time Friday, when the Journal-World visited the lab.

Toy drones are great for people like him who love flying things but may not have the time, money or desire for a pilot’s license, Bramlette said.

“Flight, on its own, is just an amazing thrill,” Bramlette said. “Having something this small means that the average person can enjoy that.”

Robby is envisioned as a toy — maybe the type of thing alumni could buzz around Memorial Stadium while tailgating? — albeit a high-tech and powerful toy, associate professor of aerospace engineering Ron Barrett-Gonzalez said.

Robby is a convertible quadcopter, “next-level” compared with the highest-tech quadcopter drones sold for entertainment today, Barrett-Gonzalez said. Robby has four propellers plus a fuselage and can hover like a helicopter or tip sideways and rocket through the air like a plane.

Translating Robby from prototype to market would require a manufacturing plan that would keep costs around a few hundred dollars, affordable for hobby operators.

Robby’s cousin, the B model, is envisioned for military and police use but isn’t yet ready to debut, Barrett-Gonzalez said. That model is more likely to need — and its owners more likely able to afford — on-board collision-avoidance technology before hitting the skies.

To keep it from straying far from its operator, the A model would be equipped with a range limit for the transmitter, Barrett-Gonzalez said. And for now, he said, keeping toy drones in the operator’s line of sight is what the FAA requires to keep them in the air.