But with fleets of drones unleashed, what will keep them from crashing into things — including each other?

Collision avoidance technology is one of the big obstacles to gaining federal approval for commercial use of small unmanned aerial vehicles, or UAVs. And some Kansas University engineers are working on it.

“Collision avoidance is a very, very important problem that needs to be solved before drones can proliferate like the industry is hoping,” said Suman Saripalli, who co-owns KalScott Engineering, a Lawrence firm specializing in developing drones and related technology, and who has mentored one of the KU students.

A drone would have to find its way through a neighborhood, perhaps encounter a moving car in the driveway and hover several seconds to avoid it, fly 15 feet another direction, then hover again until the dog gets off the porch, then move on to its target, the front door.

“All of these things have to be taken into account instantaneously,” Saripalli said. “That’s the sort of intelligence that’s required, and that’s not easy to come by. It’s a very, very tough engineering problem to solve.”

That’s especially true when technology must be small enough for the size, weight and power limitations of small drones. 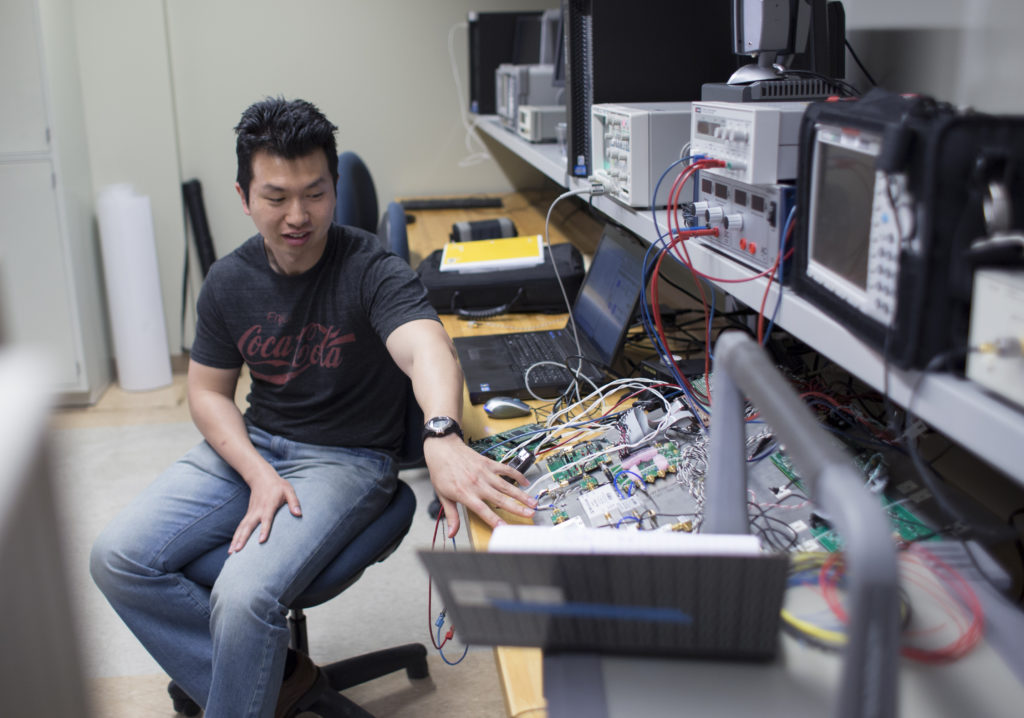 In the past several years, electrical engineering doctoral student Lei Shi has taken his collision avoidance radar system from “an idea on the back of a napkin” to a business.

He has filed a provisional patent application on the technology through KU and founded a business, UAVradars LLC, through the KU Catalyst student business accelerator.

He tested it on a manned airplane in a rural area, and it worked, successfully alerting the plane to avoid a radio tower (though in this test, of course, the real live pilot was there to see and steer).

The next step was shrinking the radar down enough to fit on a small drone — an engineering feat, not as simple as just making every piece smaller, Shi said.

Now Shi has a hand-sized version of the radar, which has been successful in lab simulations. The next goal is to test it on actual UAVs.

With research and development mostly complete, Shi hopes his business will be able to commercialize the technology, including market analysis, pricing and manufacturing.

Another group of KU engineers has a patent and is ready to license a device called a micro anemometer anti-fouling instrument. 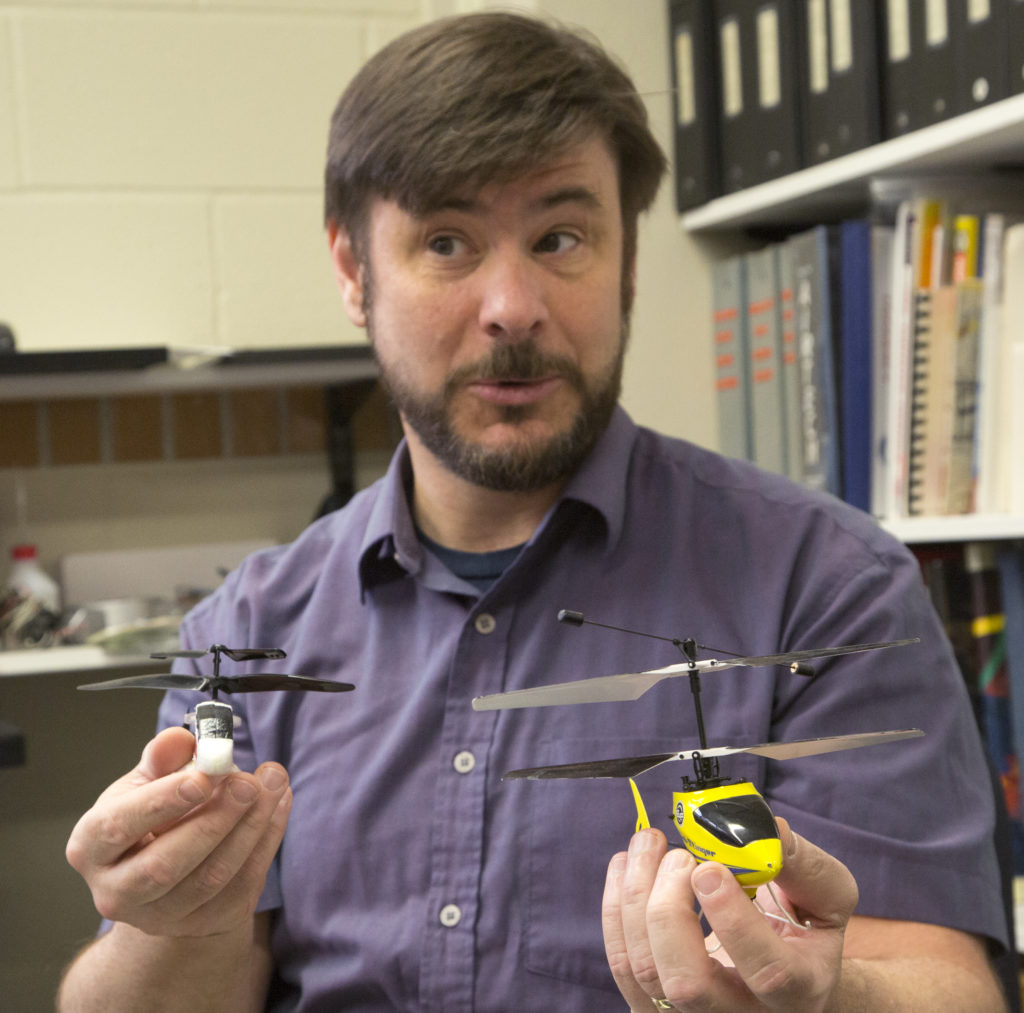 KU associate professor of aerospace engineering Ron Barrett-Gonzalez displays two small drones, or unmanned aerial vehicles (UAVs). He helped develop an instrument that enables sound-sensing anti-collision devices to be used outdoors, even on drones as small as these.

Here’s what that is, according to Ron Barrett-Gonzalez, associate professor of aerospace engineering:

About five years ago a Dutch company developed an on-board collision avoidance device that relies on acoustics. The MicroFlown device can detect and identify other flying objects based on the sounds they make; small drones usually sound like miniature fans, for example, and larger manned aircraft are more powerful.

A major flaw for MicroFlown?

Even just a drop of water would shut it down, so it basically couldn’t function outdoors, Barrett-Gonzalez said.

KU’s instrument uses electricity to shake off water, mold or dust — kind of like a wet dog shaking off, only at thousands of cycles per second.

“We didn’t develop the baseline technology, but we made it better and enabled it to work outside,” Barrett-Gonzalez said.

To detect and avoid stationary objects, he said KU’s technology could be coupled with other devices that could send out sound signals and listen for reflections.

As for most research, securing funding is an ongoing challenge to moving forward, said KU electrical engineering professor Chris Allen, the adviser for Shi’s radar project.

Even for Shi to test his draft radar on the piloted aircraft, the plane needed FAA approval to go up with adaptive equipment plus FCC approval to use a radio frequency, since there’s no band set aside for such research.

“We have to be creative,” Allen said.

KU researchers are excited about the possibilities, though.

Barrett-Gonzalez and his students are working on developing drones that can fly long distances quickly in airplane mode then switch to hover mode to complete a task. Barrett-Gonzalez said such flight capability coupled with good collision avoidance technology makes these drones safer.

He imagines them completing tasks such as carrying high-powered cameras to inspect bridges, sans lane closures or dangerous positioning for humans.

“It would be as if the inspector’s eyeballs were 6 inches away from the girder,” Barrett-Gonzalez said.

Collision avoidance technology needs to be ready before the drones are unleashed, researchers say.

Allen said the burden of safety should fall on UAVs, not the unsuspecting rest of the world.

“We want them to be used in a safe way so they can go out and make people’s lives more efficient and more productive, but we have to share the airspace,” Allen said. “If they ever cause harm to people or property, then that’s probably going to shut down the UAV business until we get issues squared away.”