Topeka ? Republican Sen. Pat Roberts has shaken up his struggling re-election team in Kansas, replacing a longtime confidante as campaign manager and getting help from national operatives in a race that’s suddenly a battleground in the fight for Senate control.

The campaign overhaul comes after Roberts’ bruising primary fight and the stunning attempt by his Democratic challenger this week to cancel his candidacy in the face of a strong bid by an independent candidate.

Roberts confirmed Friday that Leroy Towns — who the three-term senator once described as his “alter ego” — has stepped down as executive campaign manager, though he will remain as a consultant. The National Republican Senatorial Committee sent in a seasoned consultant, Chris LaCivita, and he will work with Corry Bliss, who’s managed GOP campaigns in Connecticut, Georgia and Vermont.

The campaign also has a new director for its grassroots operations, Alan Cobb, previously a senior campaign adviser to Republican Rep. Mike Pompeo of Kansas. Cobb is a former state director and national official with Americans for Prosperity, the anti-tax, small government group backed by conservative billionaire-donors Charles and David Koch.

“We are going to be very aggressive now that it has become a national campaign,” Roberts said before a political forum sponsored by the Kansas Chamber of Commerce in Wichita.

Roberts confirmed the changes only a day before the first debate of the fall campaign, at the Kansas State Fair in Hutchinson.

Independent candidate Greg Orman’s campaign declined to comment. Orman is a 45-year-old businessman from the Kansas City suburb of Olathe, and he’s running as a nonpartisan centrist. He promises to caucus with whichever party has the Senate majority and hopes to be a kingmaker if the chamber is divided.

Roberts already has labeled Orman a liberal Democrat, hoping GOP voters and Republican-leaning unaffiliated voters will identify him with Democratic President Barack Obama, who received only 38 percent of the vote in Kansas in 2012.

The 78-year-old Roberts looked vulnerable after winning only 48 percent of the vote in the August primary against a tea party opponent. The race also was roiled by Democrat Chad Taylor’s attempt to withdraw, a move that appeared to be aimed at giving Orman a better shot at defeating Roberts.

“Some things being said about Senator Roberts’ demise are premature,” LaCivita said. “Things generally are never as bad as they’re portrayed.”

Republicans need a net gain of six seats in the midterm election to take the majority in the chamber, and they’ve always counted on holding Roberts’ seat. The chairman of the national GOP committee helping Roberts is fellow Kansas Republican Sen. Jerry Moran.

“If we don’t do what we need to do in Kansas, that is just stupid,” Moran said of the renewed efforts to re-elect Roberts. He was speaking after a Kansas Chamber of Commerce forum in Wichita.

Towns served as Roberts’ chief of staff for more than 20 years, both when Roberts was in the House and after his election to the Senate in 1996, and Towns remained a political adviser after leaving the senator’s congressional staff in 2002.

“He will continue as a valuable consultant,” Roberts said.

In Wichita, Roberts’ staff described Bliss as the new campaign manager, though it wasn’t clear that he would carry the title.

Meanwhile, Taylor, a 40-year-old, Topeka-area prosecutor, still could be listed on the Nov. 4 ballot as the Democratic nominee, even though some in the party nudged him into withdrawing Wednesday.

Kansas Secretary of State Kris Kobach, a conservative Republican backing Roberts’ re-election bid, declared that Taylor hadn’t met a legal requirement to declare publicly that he was unable to fulfill the duties of the office if elected. Taylor promised to challenge the decision but had not filed a lawsuit by Friday evening. 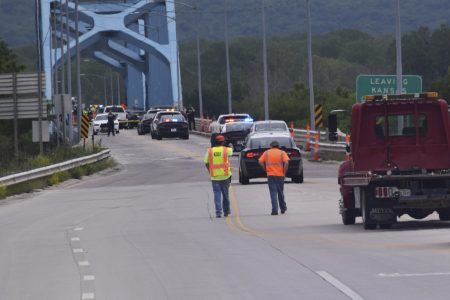