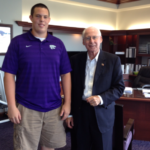 Free State High senior Scott Frantz sat down with his parents on Friday to tell them his plan. He was ready to commit to a college.

On Monday, the Firebirds’ offensive tackle was ready to announce his plans to everyone else. Frantz orally committed to Kansas State University at the end of his visit to the school.

He loved the location close to home, the Wildcats’ winning traditions, the fans, and everything else about the school.

“It’s just a family at K-State,” Frantz said Tuesday. “Everyone treats each other like a family and they really preach that. That’s what I really liked about K-State. All of the coaches care about their players and the players care for other players. It’s just a really good atmosphere.”

Frantz chose the Wildcats over his other finalists of Kansas University and Missouri, but he also had plenty of other schools interested in him. His recruitment skyrocketed after last season and he picked up a total of nine Div. I offers, according to Yahoo Sports.

Frantz, who has added muscle in the offseason and now stands at 6-foot-5, 290 pounds, said he will likely red-shirt his freshman year because the Wildcats return most of their offensive linemen.

“They’re losing four of their five starting linemen after my first year, which would be my red-shirt year,” said Frantz, who would be in line to earn lots of playing time afterward. “That was a big factor. Another thing is they’re getting a new $65 million complex and it’s going to be really cool. That’s always a plus.”

Before Frantz also announced his decision on Twitter Monday, he made sure to thank Keith Loneker Sr., who has been a mentor to him. Loneker starred at KU, played a couple of seasons in the NFL, and also has led workouts for Frantz and other Lawrence football players.

“He’s just been a really good role model in my life,” Frantz said. “He’s been there and done that. He played in the Big 12 and he went on to the NFL. He’s just been teaching me what it takes to be an offensive lineman and a good one.

“He just teaches me everything. Without him, I don’t think I’d be where I’m at.”

Though Frantz won’t be playing for his hometown Jayhawks, he’s received nothing but positive words of support from everyone in Lawrence.

“Everyone around me is extremely happy for me,” said Frantz, who had always wanted to commit before his final prep season. “It’s a big decision, it’s a big deal. K-State is a great program. I’ve got nothing but support.”

When Frantz told the Kansas State coaches at the end of his visit that he was committing, they were just as ecstatic as he was.