Local officials begging Legislature to do no harm 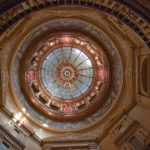 Inside the Kansas Statehouse looking up one can view the dome restoration.

Topeka ? Cities, counties, and school districts living downstream from the decisions of the Kansas Legislature have one major request as the 2014 session starts: Stop.

The tax cuts pushed by Gov. Sam Brownback and legislative conservatives are wreaking havoc with local budgets, officials across the state are saying.

At a pre-session meeting in Lawrence last week, Douglas County Commission Chairman Mike Gaughan summed up the county’s six-page legislative statement in one plea — “Please do no more harm.”

Backed by conservative majorities in the House and Senate, Brownback has slashed income tax rates, which has pushed more of the burden of funding services to local governments, officials say.

And Republican leaders are considering more tax cuts, more mandates on local governments and a bill that locals say would hinder both their ability and the ability of non-profit organizations to lobby legislators.

Lawrence Mayor Michael Dever said he wants the Legislature to act more like a partner and include city, county and local school district representatives in the decision-making process.

Two legislators who helped usher through the income tax cuts say they understand the complaints of local officials, but said their beef isn’t with the Legislature.

State Rep. Richard Carlson, R-St. Marys, and chairman of the House tax committee, was a county commissioner for 12 years. “The local units of government, like the state and federal governments, have to become more efficient. We can’t be all things to all people all the time,” Carlson said.

State Sen. Les Donovan, R-Wichita, and chairman of the Senate tax committee, acknowledged that sometimes the state sends unfunded mandates to local governments just like the federal government does to state government.

“It’s a never-ending battle,” he said. But, he said, for him the bottom line is controlling spending at all levels. “In order to give you a benefit, I have to take it from someone else,” he said.

For instance, there are proposals before the Legislature that would impose spending or tax limitations on local governments. Many local government officials opposed last year’s passage expanding the state’s concealed-carry law, saying it would increase security costs in public buildings.

The impact of Brownback’s tax changes will be on full display during the session as legislators grapple with the budget and the 2014 election campaign gains momentum.

Brownback has pushed for and signed into law lower income tax rates, eliminating income taxes for nearly 200,000 business owners, removing deductions designed to help low- and middle-income Kansans and, in the 2013 session, a sales tax increase to offset some of the lost tax revenue.

Brownback has said the tax changes will stimulate the economy and that Kansas is headed in the right direction. “We are very blessed and we’re on the rise,” he said.

Davis says the tax cuts shift the tax burden onto low- and middle-income Kansans, while reducing revenue needed for schools and education.

But more tax cuts may be on the horizon. Bankers and realtors want to eliminate the mortgage registration tax that provides $47 million per year to counties, and the already existing income tax law sets up further tax cuts should revenues grow.

In 2005-6, the Kansas Supreme Court told the Legislature it was failing to fund schools adequately, fairly, and constitutionally.

After much controversy, the Legislature approved a three-year plan to increase funding. Then the Great Recession hit, and legislators started cutting the budget.

Once the recession ended, however, instead of restoring the cuts to the classroom, Brownback cut taxes drastically.

A lower court panel told the state it can’t renege on its constitutional obligation to school funding. Its ruling could result in a nearly $500 million per year increase in school funding. That decision is before the state Supreme Court, and as Donovan recently said, “That is the 800 pound, no the 8-ton gorilla in the room.”