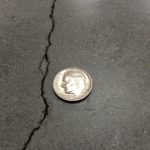 One of the cracks in concrete at the newly constructed Sports Pavilion Lawrence is shown next to a dime, for scale.

Cracking concrete at the recreation center at Rock Chalk Park is going to require a fix, City Hall officials have determined.

As the Journal-World reported in early November, about 25 cracks developed in the concrete mezzanine at Sports Pavilion Lawrence. Since that time, problems with the grout in the entryway of the 181,000 square-foot building also have developed. City officials, who previously said they would monitor the situation before deciding whether to undertake repairs, said a fix is now needed.

“We have been told it is all safe, but we are going to have to get it fixed for the aesthetics,” City Commissioner Jeremy Farmer said. “We have told the community that we’re getting a really good deal on the building, so aesthetics matter.”

On the mezzanine portion of the project, crews are testing an epoxy product that is designed to fill the cracks and blend into the concrete, said Mark Hecker, assistant director of parks and recreation.

“We want to see if we can make it disappear cosmetically,” Hecker said.

The cracks have been determined to be fairly standard “shrinkage cracks,” which aren’t of any structural concern, architects have said. But as previously reported, the design of the building called for the mezzanine area to have several saw cuts made in the concrete, a common practice meant to help control where concrete cracks occur. But subcontractors failed to make the cuts, city officials have said.

City Commissioner Mike Dever, who often inspects buildings are part of his job as an environmental consultant, said he’s not sure even the saw cuts would have prevented all the problems with the mezzanine concrete.

“Basically, we chose the least costly long-term maintenance finish for that concrete, but that is not the most pleasing option aesthetically,” Dever said.

He said the city eventually may need to install carpet or some other type of flooring material on top of the concrete mezzanine. The epoxy work is currently covered under a one-year building warranty provided by the general contractor, Lawrence-based Gene Fritzel Construction Co. and the various subcontractors. But if city officials decide to install a new type of flooring that was not included in the original design, the city may be responsible for those costs, Dever said. But he said the city should be due a refund of an undetermined amount of money for the saw cuts that were called for but not completed.

“I think we’ll look to the contractor and subcontractor for some assistance on this,” Dever said.

The issues that have developed in the lobby area of the building are of a different nature, Hecker said. He said the floor of the lobby area was designed to have grout installed in the many concrete joints that exist in the lobby. The material in those joints has started to “pop out,” creating concerns about the appearance of the lobby floor, he said. Crews have started applying an epoxy material to those joints, and Hecker said preliminary results look promising.

City commissioners have asked to be updated on the progress of the repairs. City Commissioner Terry Riordan also has asked staff members to discuss a possible extension of the building’s one-year warranty to provide the city protection against additional concrete cracking.

“We may have a solution now that appears to work, but in two or three years, it may prove that it hasn’t worked,” Riordan said. “I would like some type of guarantee beyond a year.”

Staff members said they would discuss that issue with the contractor. City Manager David Corliss also noted that the city has retained $50,000 in payments due the contractor to ensure that issues such as these get repaired to the city’s satisfaction.

“We have every belief that the contractor is going to follow through and get this fixed for us,” Corliss said.