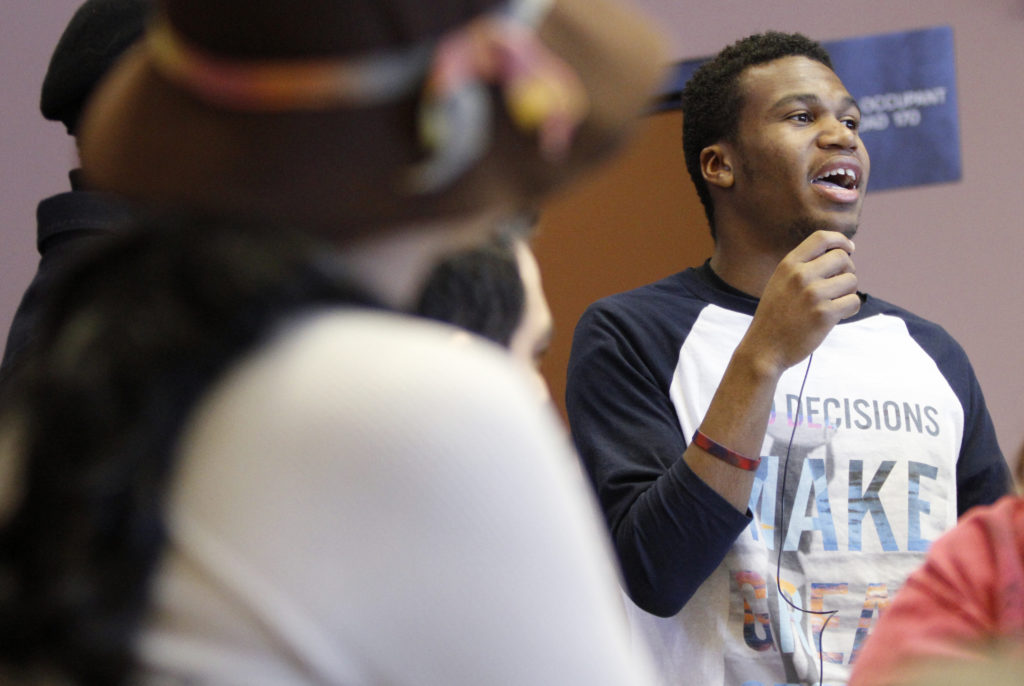 Chancellor Adams, a KU freshman from Kansas City, Kan., talks about his experiences with discrimination and racial profiling during an open forum Tuesday, Nov. 25, 2014, at the Sabatini Multicultural Resource Center at KU. Students and faculty discussed reactions to a grand jury's decision not to indict a Ferguson, Mo., police officer in the shooting death of black teen Michael Brown.

Disappointment over the Ferguson, Mo., decision morphed into a social media campaign in which Kansas University students voiced opinions that the school is failing people of color.

On Sunday and Monday, a number of black and other students tweeted using the hashtags #rockchalkinvisiblehawk and #racisthawk.

Students criticized the KU administration for not issuing a formal statement about a grand jury’s decision not to indict a white Ferguson, Mo., police officer who shot and killed a black teen. Other tweets said students of color are not recognized or considered on campus, they are treated as numbers rather than individuals and they have no safe space on campus other than the Office of Multicultural Affairs.

Senior Cassandra Osei, who is black, started the #rockchalkinvisiblehawk hashtag as a way to voice her own frustration that KU administration didn’t issue a formal statement about the student protests and activities that followed the Ferguson decision.

Even though the Office of Multicultural Affairs helped plan the open forum after the Ferguson grand jury’s announcement and has supported student events, Osei said it shouldn’t always be on that office to do things and that “maybe other departments should take the lead.”

“There was no response from the university, which I found odd and frustrating because with the sexual assault protests earlier this semester the university issued a number of statements. I didn’t really understand why they couldn’t address something as serious as this,” Osei said. “It seemed to continue a trend of being silent on issues that affect students of color.”

The social media flurry follows a Feb. 25 “open space” discussion organized by KU’s Office of Multicultural Affairs and a week of awareness activities organized by black students, beginning with a peaceful Ferguson protest march Dec. 1 on campus and also including demonstrations and discussions. Students posted about those events on social media using the hashtag #kansasblackout.

The Ferguson case represents a bigger issue nationwide, and that’s really what students are upset about, Harding said. At KU, he said, the graduation rate for black students is low and more support for those students is needed.

“Students aren’t looking at this as a single incident; they’re looking at it as systematic and institutional oppression,” Harding said. “They’re intelligent enough to broaden that conversation.”

KU Chancellor Bernadette Gray-Little did briefly mention student activism toward the end of a letter issued to campus on Monday titled “Looking back on a year of accomplishments.”

“Of course the activism on this (the sexual assault) issue and the important conversations taking place regarding race, law enforcement, and how our society can better ensure that everyone can be safe and have his or her rights protected are what we hope for from our students and community,” the letter said. “We want our students to be active, engaged citizens, and so the fact they are willing to stand up for their beliefs and call for change is itself worthy of recognition. I want to commend everyone who has engaged in these discussions in a civil, productive manner, which is in the proud tradition of community dialogue at our university.”