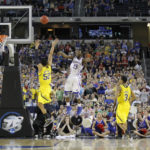 With only a few second on the clock and down by two points Elijah Johnson passes out to Naadir Tharpe for a last three-point attempt that missed leaving the Jayhawks with a 87-85 loss to the University of Michigan, Friday, March 29, 2013, at Cowboys Stadium, in Arlington, TX.

This was the 2008 national-title game all over again, only this time it’s Kansas licking wounds that will re-open every time somebody asks the obvious question: How did it happen?

How did Kansas lose a game it had locked up? How did it not secure a victory that would have had the Jayhawks playing Florida on Sunday with the winner advancing to the Final Four?

How did Kansas, which held a 10-point lead with 2:22 left in regulation when Elijah Johnson drove into a lane with four defenders and 30 seconds left on the shot clock, turned around and threw an errant pass toward the perimeter that was run down at the other end for an uncontested Glenn Robinson dunk, lose to Michigan, 87-85, in overtime?

“We’re right there where we wanted the game, and of course the last three minutes we didn’t do a lot of things right, which will be something we’ll look back on and regret for a long, long time,” Kansas coach Bill Self said. “But props to Michigan for making all the plays late.”

Said Travis Releford: “We had a chance to seal the game, but we made some bone-headed plays late.”

It was nice of Releford to say, “we.” That’s the way teammates talk. They don’t point fingers and this was a tight-knit group that did none of that. Releford played well in his final game as a Jayhawk, totaling 16 points, five rebounds and six assists with just one turnover in 42 minutes. So did Perry Ellis, who made the most of 15 minutes and totaled eight points, five boards, three assists and a great hustle play that kept the ball from going out of bounds. Same for Kevin Young (12 points, seven boards, defensive lapses late) and Jeff Withey (12 points, eight boards, five blocks). Ben McLemore caught fire and was largely responsible for giving Kansas a double-digit lead, until he deferred late to the veterans, fell into foul trouble and lost his aggressiveness. He led Kansas with 20 points, but attempted one shot in the game’s final 16 minutes. Even fellow red-shirt freshman Jamari Traylor made the most of his five minutes with an energetic performance that yielded two points, two blocked shots and an assist. Naadir Tharpe steered Kansas to a six-point halftime lead as Johnson was limited to three first-half minutes.

The anatomy of the KU breakdown:

Robinson’s dunk, courtesy of Johnson, cut the lead to eight points with 2:18 left. Johnson failed to dribble the ball past the mid-court line in the allotted 10 seconds, giving the ball back to Michigan. It was Johnson’s third turnover in four possessions. Burke set up McGary for an easy bucket, trimming the lead to six points with 1:54 left. Releford’s two free throws pumped it back to eight with 1:22 remaining.

Burke — notice how frequently his and Johnson’s names surface in the re-living of a Michigan dream and KU nightmare — buried a three-pointer to cut it to a five with 1:15 left. Tim Hardaway Jr. missed a three with 35 seconds left the basketball squirted loose and was there to be had, the type play Self’s teams usually feast on.

“All we had to do was fall on the ball,” Self said. “The possession arrow was ours. We just didn’t do it. Seasons usually come down, if you’ve got a pretty good team, to one possession, at least it has with us, most every year. This wasn’t one possession. This was about five possessions.”

Robinson picked the ball up and scored. Now the lead was three. Johnson’s two free throws with 21 seconds left pumped the lead back to five. Burke’s layup with 14 seconds made it a three-point game again. Burke fouled Johnson with 12 seconds left and Johnson missed the front end of a one-and-one.

Self generally believes in fouling with a three-point lead once the clock shrinks to six seconds. Nobody was close enough to foul Burke, freed by screens, when he launched a 27-footer as Young ran toward him but was late in doing so. Burke nailed it. Of course he did.

Kansas had 4.3 seconds to get off a good shot and did, but Tharpe’s three-pointer kissed off the front of the rim.

Technically, Michigan won the game in overtime, but in reality, Kansas and Michigan combined to decide it at the end of regulation.

A second overtime loomed as a possibility with the ball in the hands of Johnson, whose extra period was a mixed bag that featured a pass thrown right to Michigan and a clutch three-pointer. He looked to be on his way to a drive that would finish with a shot. Instead he fired to the perimeter, where Tharpe forced a running three-pointer.

“I thought he could get to the rim,” Self said. ” … He got his shoulders past him. But for whatever reason, he veered behind the backboard and really didn’t give himself a shot.”

Maybe bad karma springing from Johnson’s flagrant foul, more than anything, undermined what looked like a sure ticket to an Elite Eight showdown with Florida.

“I didn’t see it,” Self said, “but obviously the official said he did it, so he did it. The film doesn’t lie. That’s not how we play. And that was not smart at all. And then he gets a bad second foul on a charge, when all he had to do was stop and shoot it. The third foul he plays for 15 seconds and gets that one.”

Johnson said the play was “unintentional” and the referees agreed.

Even with their senior point guard limited to three first-half minutes, Kansas had the game in the bag. So how did they lose it? Karma. Had to be karma.