Opinion: KU makes it hard for recruit Julius Randle to say no 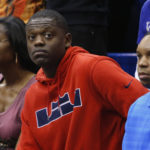 Kansas recruit Julius Randle sits behind the Kansas bench during the first half on Saturday, Feb. 16, 2013 at Allen Fieldhouse.

Julius Randle, ranked second by Rivals behind only Andrew Wiggins in the Class of 2013 among high school basketball players, had a seat behind the Kansas University bench Saturday night. He was treated to an evening that highlighted the past and reminded the audience that the present, somehow, never strays far from the glorious days of yesteryear.

Freed from a funk that included a three-game losing streak, Kansas is back to doing what it usually does under Bill Self now, Roy Williams and Larry Brown before him. In a word, dominating.

Randle watched Kansas destroy Texas, 73-47, one of the other schools on his short list, along with Florida, Kentucky, North Carolina State and Oklahoma.

Not only that, he watched it sitting among seven active NBA players who played their home games in front of adoring capacity crowds, sometimes including fans who were in the building in the morning watching the ESPN “GameDay” crew do its thing, as was the case Saturday.

Well before tipoff, students chanted “We want Randle! We want Randle!” They didn’t mean team orthopedist Dr. Jeff Randall, who happened to be strolling past at that moment. Their knees were fine, and so were their voices. They used them to speak from the heart. They want Randle, and they made sure he knew how much they want him.

Randle also was treated to a slice of how Kansas treats its stars from the past when he witnessed the unfurling of Chalmers’ No. 15 jersey, stationed high on the south wall between those of Wayne Simien (23) and Max Falkenstien (60), both of whom also were in attendance.

Kansas had Texas doubled up, 70-35, late in the game, and the recruiting chant again erupted: “We want Randle! We want Randle!” Sitting next to his mother and wearing a red sweatshirt and huge grin, Randle thanked the students with a wave. They responded with another chant: “Come to Kansas! Come to Kansas!”

The celebrity list on this electric evening extended beyond those who made their names playing basketball. PGA Tour pro Gary Woodland, who drives a golf ball the way Ben McLemore dunks a basketball, took in the game. Kathleen Sebelius, U.S. Secretary of Health and Human Services since 2009 and Governor of Kansas from 2003 to 2008, looked to be having a blast.

Randle and the rest of the crowd caught a glimpse of how much fun the Kansas players have in the locker room, doing the Harlem Shake, captured by a video on which McLemore also looks the most talented. (“With the first pick of the 2013 NBA Draft … select Ben McLemore.”)

After the blowout, Elijah Johnson shared that when he was in the throes of the worst slump of his career he received encouraging text messages from former stars who let him know they had been there, done that, a once-a-teammate-always-a-teammate reminder that surely would appeal to any recruit pondering a college choice.

A 6-foot-9, 240-pound forward, Randle totaled 19 points and 10 rebounds Friday night for Prestwood Christian in Plano, Texas, in his season debut after missing most of the season because of a foot injury.

If Randle doesn’t choose Kansas, it won’t be for lack of effort on the part of anyone emotionally invested in the program. He would be joining a recruiting class ranked second without him. Small guards Conner Frankamp and Frank Mason, wings Wayne Selden and Brannen Greene and 7-foot center Joel Embiid make up a class that has everything but a power forward.

Randle certainly couldn’t hurt his NBA Draft portfolio by learning to play the sort of team defense KU played in harassing Texas into a .218 overall shooting percentage and a .095 three-point mark on a night the Longhorns had shot-clock violations on back-to-back possessions. And as McLemore showed in executing a 360-degree dunk, Randle also would be coming to a place where freedom of expression isn’t discouraged.

Wiggins, a 6-7, 190-pound forward, has KU on his list, along with Kentucky, North Carolina and Florida State.

It might be difficult to pry Wiggins from Florida State, reportedly the favorite because his parents both starred in their sports as Seminoles. Guard Mitchell Wiggins played in the NBA. Marita Payne-Wiggins ran the 400 meters for Florida State and in the Olympics for Canada.

After the show he witnessed Saturday, it’s difficult to imagine Randle saying no to Kansas. Think about it: If you were in his sneakers, could you say no?