On a related issue, the advocates vowed to step up efforts to persuade Brownback and the Republican-dominated Legislature to expand Medicaid under the Affordable Care Act. 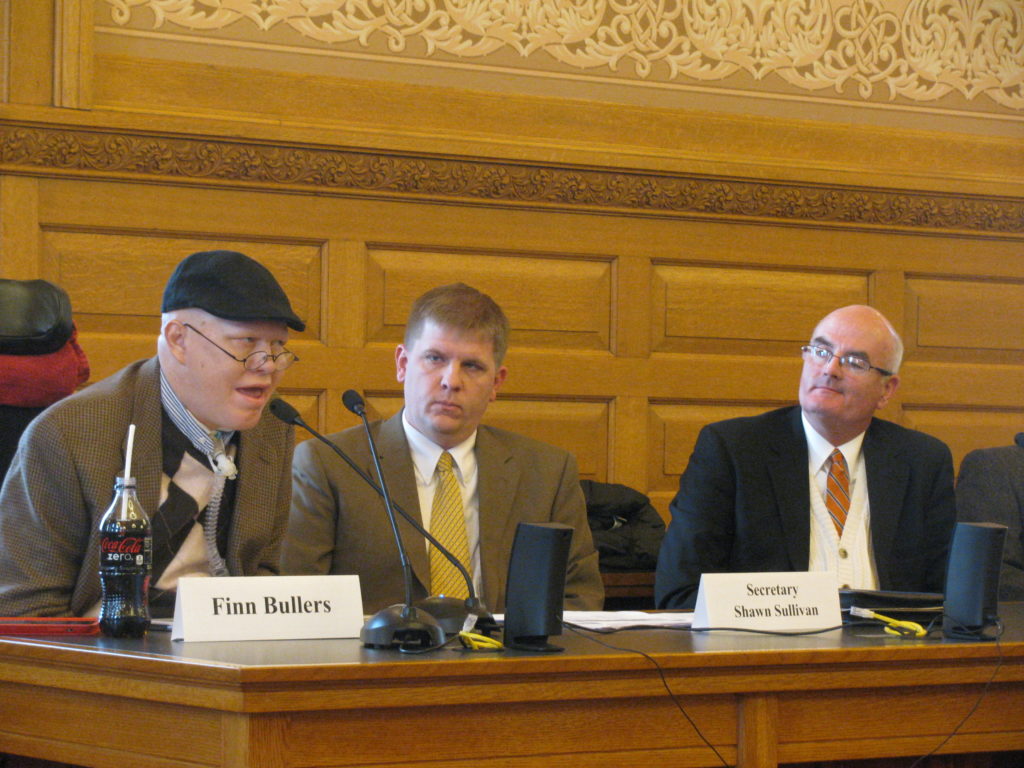 Finn Bullers, left, speaks Thursday during a meeting of the National Council on Disability. Shawn Sullivan, who is secretary of the Kansas Department for Aging and Disability, and state Rep. Jim Ward, D-Wichita, listen as Bullers describes problems he has had with KanCare, the state's privatized version of Medicaid.

The issues were discussed during a meeting of the National Council on Disability, an independent federal agency that makes recommendations to the president and Congress.

The council holds four meetings per year and tries to hold two of those outside of the Washington D.C. area. Members had expressed an interest in hearing more about the managed care model under KanCare, and one of the council’s members, Gary Blumenthal, is a former Kansas legislator who represented Merriam.

But critics cited numerous problems and reiterated their opposition to the state’s plan to place long-term care for those with developmental and intellectual disabilities under the system. That plan is set to take effect Jan. 1 pending approval from the federal government.

Finn Bullers, of Prairie Village, who is 49 and suffering from Muscular Dystrophy, said before KanCare he received in-home care around-the-clock, but under KanCare, the private insurance company reduced that to 40 hours per week. He said his doctors say that cut is unrealistic.

Kansas Department for Aging and Disability Services Secretary Shawn Sullivan said he couldn’t speak about Bullers’ case, but said under the state’s old Medicaid system was flawed because organizations could propose a care plan and then provide those services. That produced conflicts of interest and resulted in some people getting more services than they needed, he said.

But Rocky Nichols, executive director of the Disability Rights Center for Kansas, said complaints to his office about services have increased 50 percent since KanCare took effect.

And, he added, many people needing in-home services wait up to 12 years.

“We believe the state is not upholding its end of the bargain,” he said.

State Rep. Jim Ward, a Democrat, said hospitals in his hometown of Wichita were reporting lengthy and costly legal disputes with the private insurance companies over getting reimbursed for health care services.

“This is a way to balance the budget where tax cuts empty the treasury and then programs are pointed at as the problem. It’s a little bit of a game and the loser in the game tend to be the people who are not at the table,” he said.

Debate of expansion of Medicaid

The advocates also called for expansion of Medicaid. Under the federal health reform law, states can expand the income eligibility limits for Medicaid.

Twenty-six states have expanded, but most states headed by Republican governors, such as Kansas, haven’t.

Under the reform law, the federal government would pay for the expansion for three years, and no less than 90 percent after that.

Ward said if Brownback would push for Medicaid expansion among his GOP allies, the governor would also find support from legislators who generally oppose him on other issues.

“It really is on his desk and we await his decision,” Ward said.