In a less than a year’s time, the Kansas University undergraduate started an officially recognized student organization that has 80 members and went on a medical mission trip to Panama. The foundation is in place for the club to be sustainable long after its creator graduates.

Called the Jayhawk Health Initiative, the organization gives pre-health undergraduates at KU in-the-field training in their chosen professions. The group plans to eventually go on two health care mission trips a year. That’s because, as Loving says, “The best way to learn is to do.”

Loving originally attended a small, private college specifically because it had an experiential learning program. But after transferring to KU the following year, she noticed a lack of opportunities for pre-health students wanting to get on the fast track to their careers. So she helped arrange a medical mission trip to Guatemala for several undergraduate students.

She later proposed the idea for the Jayhawk Health Initiative to Kathleen McCluskey-Fawcett, director of the KU Honors Program. It was approved in short order; McCluskey-Fawcett became its faculty advisor.

“For one, it helps students decide if it’s something they want to do with their life,” McCluskey-Fawcett said. “For some students, it might send them in a completely different direction; for others, it will reinforce their decision to go into health care.”

Loving worked with the KU Study Abroad Office and with international relief group Global Brigade to organize a trip to Panama right after finals this past spring. More than 200 students attended informational sessions about it. More than 75 students applied for 25 spots.

One of them was 19-year-old freshman Shawnee Wallace, who’s now a member of the Jayhawk Health Initiative’s nine-member executive board.

“Medical school is so competitive,” she said. “The earlier you know that’s what you want to do, the better. Then you can get experience and build your resume.” 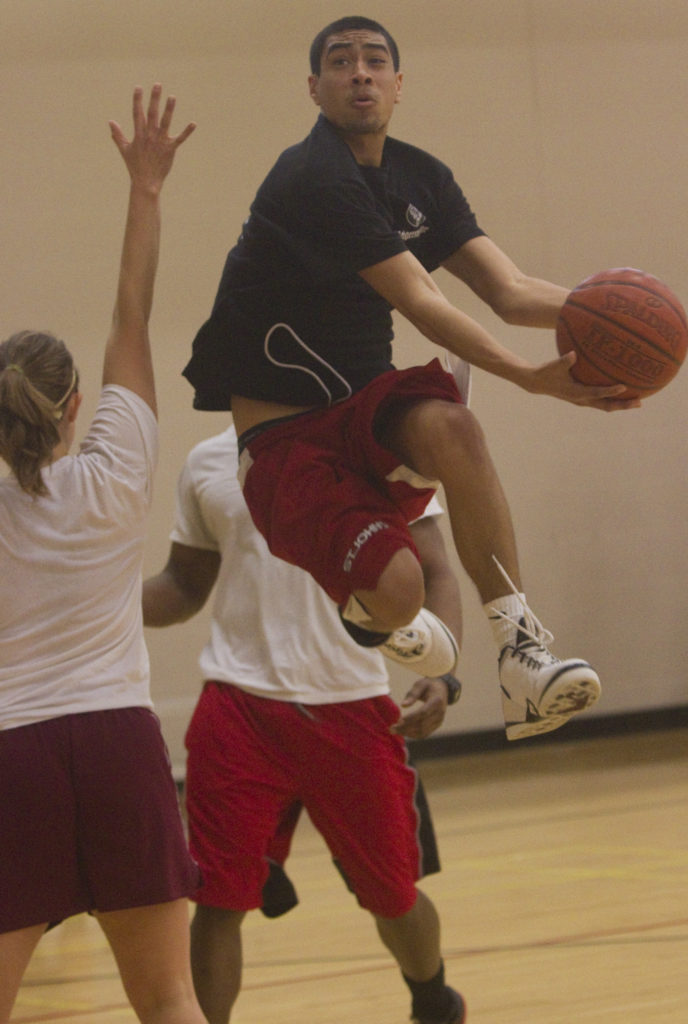 The organization raised funds for the trip at its inaugural Hoops for Health three-on-three basketball tournament, held on the KU campus in April. About 125 people participated in the tournament, contributing about $1,000. The club got other gifts of money and medication from the community. Students in the KU Honors Program each received a $1,000 stipend, which covered about two-thirds of the trip’s cost.

On May 18, the Jayhawk Health Initiative headed to Panama, where they provided aid to people who don’t normally have access to health care.

“A lot of the things we take for granted here can do a lot of good there,” said Wallace, citing items like Ibuprofen and anti-itch cream.

In Panama’s Darien Province, the KU students operated a mobile medical unit at a school, where they did triage and intake, entered vitals into a database, shadowed doctors, asked questions and filled prescriptions. Education also was a big component: The volunteers taught Panamanian kids how to brush their teeth, eat healthy and exercise.

The most harrowing moments came at a dental clinic, which treated children whose teeth had been hollowed out by cavities. “There were a lot of kids getting their teeth pulled out, silent tears streaming down their face,” Loving said. “It made us see how lucky we were to have toothpaste and toothbrushes when we were young.”

The KU students treated more than 300 residents, many of whom traveled hours through the jungle to get there. At the end of the trip, the locals performed dances and held a market fair for the students.

“A lesson I took back was just how lucky we are here in America and in Lawrence, how lucky we are with the services we have and our ability to receive health care,” Loving said. “Even if you can’t afford it, you have a way to get it. In Panama, they just don’t have access to it due to their location.”

The next steps for Loving are to get the Jayhawk Health Initiative accredited through the KU Study Abroad Office, start an EMT course, implement a program where students can shadow professionals in their fields, and start a database on available medical research and internship positions in the Lawrence and Kansas City regions.

“We want the organization to remain student-led — that’s why it’s called the Jayhawk Health Initiative,” Loving said. “Students have to have the initiative to make their education as well-rounded as they can make it.”