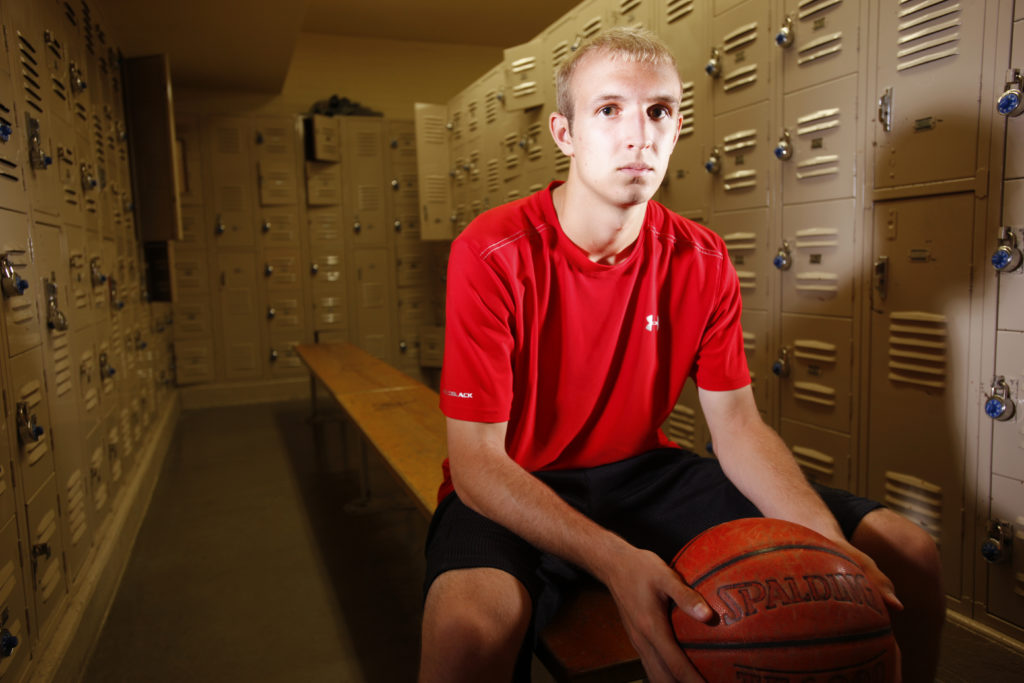 Wichita North senior and Kansas University recruit Conner Frankamp is pictured on Wednesday, Sept. 19, 2012, at Pleasant Valley Middle School in Wichita, where he works out daily with his father, Marty Frankamp. Frankamp said that although he is looked at as a shooter, he is preparing to play the point if needed for KU.

Wichita ? With the scoreboard clock running, Marty Frankamp fires a pass to his son.

Conner — a senior at Wichita North High School and a Kansas University basketball commit — doesn’t say a word. He catches the pass and puts up a three from the left wing.

Just 45 minutes earlier, Conner had driven his beige Honda Civic — it now has a small silver Jayhawk on the back — a few minutes from North High to Pleasant Valley Middle School.

A couple months ago, after years of prodding from Marty, the middle school finished up its new gym, which includes dark blue paint and a fresh-gym smell to go with it.

On this Wednesday in mid-September, Conner is continuing to break in the nets. He works out nearly every day after school with his dad, who has taught P.E. classes for more than 20 years at the middle school.

The clock is down below 6 seconds now, and Marty’s final pass catches Conner in a bad spot on his hand.

Conner shakes his hand for a second — just a slightly jammed finger –and puts up his final shot from the left corner.

The 50-minute workout doesn’t stop there. It also includes ball-handling drills, where Conner weaves his way through 10 orange cones on the opposite side of the court, sometimes avoiding the obstacles despite dribbling behind his back.

It also includes stepback twos, where Conner dances like a boxer, jabbing a step in before taking two quick steps back to shoot 18-footers.

Most of these drills are to help him for the upcoming high school season, where Conner needs just 592 points — or about 28 points per game — to top current KU player Perry Ellis’ all-time City League scoring record.

Marty also is looking to the future. There’s a drill where Conner passes it to him in the post, then relocates in the corner for a three. Or the one where, at game speed, Conner catches the ball on the run, sets his feet and shoots a three (Conner makes all nine of those before Marty decides to switch to something else).

Both of those are to prepare Conner for when he’s in Lawrence — “college shots” as Marty likes to call them.

The goal is to make 400 shots per day, and though this workout is a bit shorter than normal, Marty guesses afterwards that Conner only missed about 25 shots.

Every shot was from at least 15 feet. And at least two-thirds of them were threes.

Marty says it’s about an average shooting day for his son.

“I don’t even think he’s shooting that good right now,” Marty says. “And he doesn’t, either. He just thinks he’s off just a little bit.”

Marty says Conner always was different from other kids in his love for the game.

Conner was the 3-year-old who would shoot on his Little Tikes goal for hours. And, when Marty was coaching his oldest son Kevin at AAU tournaments, Conner would be the first one on the court during breaks in the action, getting the opening shot up to the rim.

“He didn’t care about anything when he was little,” Marty says, “except for a ball.”

Conner learned to shoot with his dad in their garage, hoisting up shots on an eight-foot goal.

Playing Biddy Basketball in Wichita at age 8 — the league uses shorter hoops and slightly smaller basketballs to promote work on fundamentals — Conner was named Mr. World Biddy after leading his team to an all-star championship in Louisiana.

When he was 12, Conner also learned about work ethic from native Kansan and former Missouri State guard Jackie Stiles, who helped him for about six months while she worked as a trainer in Wichita.

Stiles, the all-time leading NCAA women’s scorer, coached Conner on which shots to take and also stressed quality over quantity when it came to shooting after she suffered through so many injuries following her career.

Marty has coached Conner’s shooting from his seventh-grade year on, helping him through the workouts that now have become a routine.

“I wouldn’t be the player I (am) without him,” Conner says. “I thank him a lot for that, because he’s always pushing me and never praises me too much and is always on me.”

All along, Marty was trying to gauge just how good his son could become.

Conner had a solid eighth-grade year playing for his dad at Pleasant Valley, but would he do just as well in the City League the next year?

Three years later, Conner is on his way to one of the best basketball careers ever in the state of Kansas.

He broke a 33-year-old City League scoring record his sophomore year, posting 52 points in a game against Wichita Northwest.

Last year as a junior, he scored 38 points in a 47-38 road upset over Ellis and Wichita Heights, as the Falcons lost for just the second time in four years — a game Conner says he didn’t shoot well in for the first half before pouring in 27 second-half points.

Conner also has thrived in the summer.

In July, he led the United States in scoring at the U17 FIBA World Championships, putting in 14.1 points per game — including 22 in the championship game — as Team USA went 8-0 and took home the gold medal in Lithuania.

“That was the best experience of my life, I would say,” Conner says. “Just being able to put on that USA jersey and represent your country, it’s unbelievable.”

Then last month, Conner won the three-point shooting contest at the Under Armour Elite 24 Hoops Classic in Venice Beach, Calif. — an event that features 24 of the top high school players in the nation.

In that contest, he crossed over Harden once before putting in a layup, and also knocked in a three over Jennings.

“It was pretty cool,” Conner says. “It was kind of surreal to be able to be on the court with those kind of guys.”

Focused on the future

So what’s next for Conner Frankamp?

The immediate goal, he says, is to help his team to a state title after North was eliminated in the quarterfinals at State a year ago.

Still, much of Conner’s routine remains focused on his future after this year.

Earlier this month, Conner — along with his parents, Marty and Karen — hosted KU coach Bill Self for a two-and-a-half-hour in-home visit over sandwiches from Picadilly.

While there, Marty made sure to ask Self what improvements he’d like to see from Conner before he arrived at KU.

No. 1 was adding muscle.

“I’m not that strong right now, but he said I had a lot of time to get ready for that before I get to KU,” Conner says. “So that’s one thing I work on.”

After his shooting workouts, Conner meets up with Wichita trainer Ray Birch, who is in charge of his strength training and nutrition.

It’s a rare time in the year — from September until November — when the two can actually work on gaining weight with Conner not playing competitive basketball.

Right now, Conner is at about 164 pounds, with the goal to get him to about 172 before the high school season begins; Self would like to have Conner between 170 and 175 pounds when he arrives at KU next summer.

The strength also would put Conner in a better position to play either the 1 or the 2; Self told him to come in prepared to play either.

“I can play both positions. I played point for North and everything,” Conner says. “I like to pass a lot, but at North, I don’t get to do that that much. I have to score first to win. I like to distribute the ball a lot and lead the team the best I can.”

Because Conner has to have a score-first mentality for North, he believes that his passing skills sometimes go unnoticed.

He was able to impress with his passing skills during this summer’s Pangos All-America Camp, with Rivals.com national recruiting expert Eric Bossi saying, “His skill on the offensive end serves him equally well as a scorer or facilitator and he’s got matching athleticism.”

“The games he enjoys most are where he doesn’t have to score the most,” Marty says. “He told me this summer, he really enjoyed some of the camps he went to where he could be point guard — where he could just run the team and make shots when he was open.

“That’s probably what his role with KU is going to be, hopefully, is that he’ll score some, but he’s not going to have to be the man to shoot it all the time.” 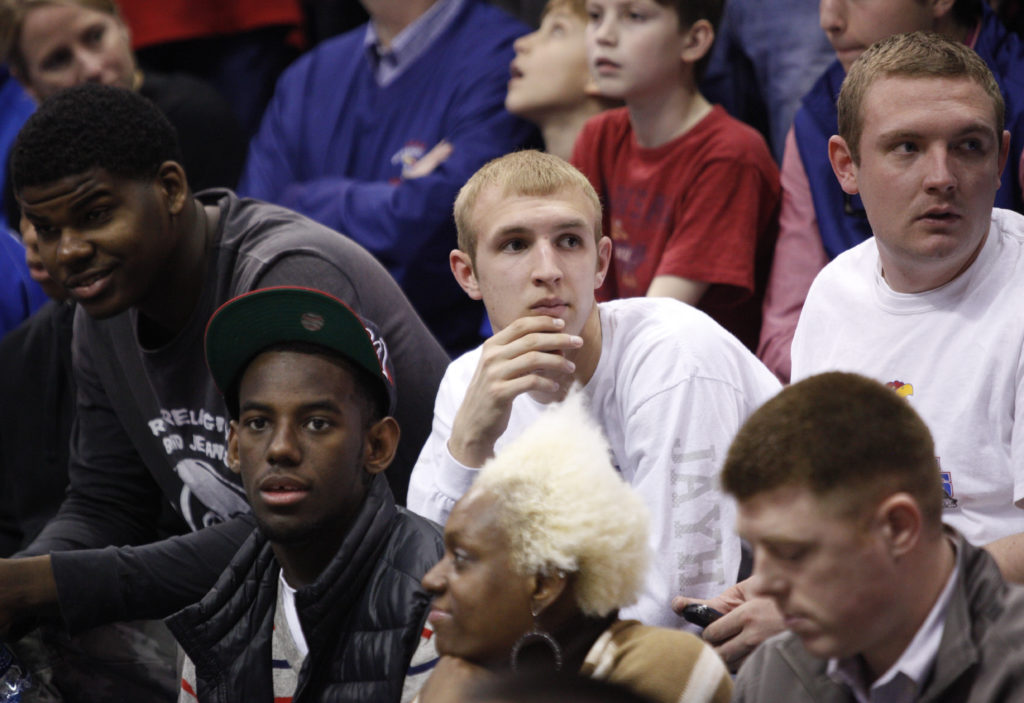 Kansas commit Conner Frankamp, center, watches from behind the bench prior to tipoff against Missouri on Feb. 25, 2012, at Allen Fieldhouse.

Though he’s enjoying his senior year, Conner can’t help but be excited about the future.

He was there at the KU-Missouri game at Allen Fieldhouse last year, saying his ears were still ringing two days later.

After following the program his whole life — Kirk Hinrich was one of his favorite players growing up — Conner says there’s a lot to look forward to.

“Just being up there,” Conner says, “and being at the best school in the country.”

About once a year, Conner likes to go back to watch the video that started it all: a recording of his first organized basketball game as a 5-year-old (he scored 17 points, by the way).

Conner jokes that perhaps the most noticeable thing from the video is that he had a big head.

That hasn’t seemed to follow him during his rise as a local basketball phenom.

Though his strength workout is in less than 20 minutes, he reiterates twice to a photographer that he’s doing fine on time, being sure to ask how the trip down to Wichita from Lawrence went.

Conner continues the conversation with questions about Lawrence — his home in a year — and never pulls out a cellphone, sitting on a bench with his hands folded in front of him while waiting for the lights to be put in the right place.

A couple weeks ago, Marty couldn’t help but be proud after going to parent-teacher conferences and receiving reports that his son was humble, polite and a hard worker.

The photo shoot ends and Conner stands up to head to another workout, this time to get his body ready for this year and beyond.

“There’s always room to get better,” Conner says. “You’re never perfect at anything.”