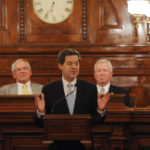 Click to read: What Kansas taxpayers could expect under the governor’s proposal

And they distributed runs from the Kansas Department of Revenue on how Brownback’s plan would affect different types of taxpayers.

Currently, a single head of household with one child, with a Kansas adjusted gross income of $20,000 per year and using standard deductions would receive a $382 state income tax refund. Under Brownback’s plan, that taxpayer would owe $60 in taxes because of the loss of tax credits. That amounts to a tax increase of $442.

Meanwhile, under the current tax schedule, a married couple with a Kansas adjusted gross income of $64,930, filing jointly with one child and using standard deductions, would pay $2,412 in state income taxes. Under Brownback’s plan, they would pay $1,987, for a tax cut of $425.

An example of this, he and Senate Minority Leader Anthony Hensley, D-Topeka, said was Brownback’s desire to eliminate the state version of the Earned Income Tax Credit.

Getting rid of the EITC would take $90 million out of the pockets of working poor families and put 4,000 more Kansas children under the poverty line, according to Kansas Action for Children.

“Elimination of the Earned Income Tax Credit would have a devastating impact on Kansas children and families,” said Shannon Cotsoradis, president of KAC.

But the Brownback administration has said there is widespread fraud in the EITC.

Brownback’s Budget Director Steve Anderson said, “We have no way of making sure, for example, that a single mother is spending that on needs for her children.”

That brought a sharp retort from Davis.

Hensley said the EITC “is a tried and true credit and anti-poverty type program.” At the news conference, Hensley handed out a paper with a quote from former President Ronald Reagan who signed into law the federal EITC. Reagan said, “The Earned Income Tax Credit is the best anti-poverty, the best pro-family, the best job creation measure to come out of Congress.”

Advocates estimated that more than 90 percent of Kansas’ EITC dollars go to families with children, and the average credit is about $360.

But Brownback officials have said two thirds of the money the state would recover from eliminating the EITC would be used to lure more federal dollars and then be plowed back into programs designed to help low-income families. The other third of the captured EITC will be used to double the standard deduction, under Brownback’s plan.

Brownback’s tax overhaul, which he says is needed to spur the economy, would collapse the three current individual income tax rates into two.

Brownback’s plan would tax 3 percent of the first $30,000 and 4.9 percent on the portion above that. It would also eliminate individual state income tax on most small businesses.

Brownback said his plan would unleash the Kansas economy by making state tax policy more competitive with other states.

“I firmly believe these reforms will set the stage for strong economic growth in Kansas and will put more money into the pockets of Kansas families and businesses,” he said.

The plan would also eliminate many personal deductions and credits. Some of the larger ones are for charitable contributions, mortgage interest, real estate taxes, state and local taxes, the EITC, food sales rebate credits, and child and dependent care.