As people begin their final push toward Christmas, Kansas University athletics figures to play a large part in this year’s holiday season for many. 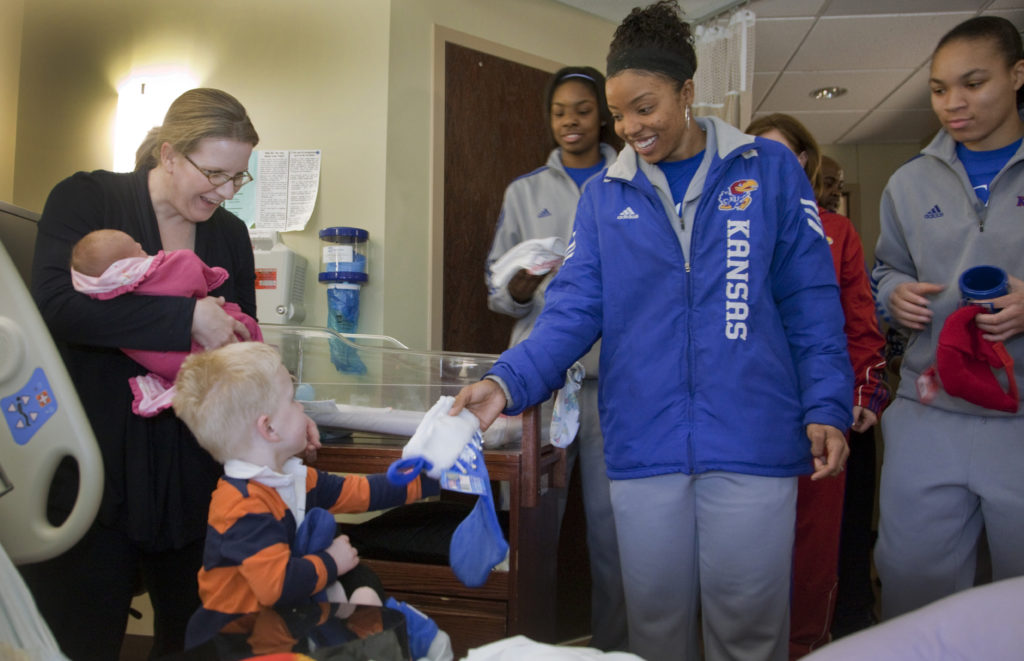 Whether that comes in the form of Jayhawk basketball tickets tucked neatly into a carefully hung stocking, cheering for Bill Self’s boys on the floor or the promise of a seemingly stellar recruiting class brought in by KU football coach Charlie Weis, it seems, once again, that this year’s happy holidays message will be delivered with a crimson and blue hue.

For the Jayhawks themselves, however, the spirit of the season is about more than entertaining the masses. From men’s basketball and baseball all the way to golf and rowing, student-athletes at KU have made giving back a regular part of their holiday experience.

Evidence of such overtures turns up each year. It’s well known what the men’s basketball team does with its shopping trip for less fortunate families, and the women’s hoops team makes similar stops. In just the past few days the KU women enjoyed a shopping spree of their own and also showed up Monday at Lawrence Memorial Hospital to hand out presents to patients.

“The holiday season’s such a special time of the year, and so positive and so uplifting,” KU women’s coach Bonnie Henrickson said. “You never want to be in the hospital, and you really don’t want to be in the hospital over Christmas. So it’s a chance for us to say hello and introduce ourselves and make some people smile and try to have a little holiday cheer. Our players will all tell you, it’s hard to believe (the patients) are more enriched after that visit than we are, because it really hits all of us. It’s an unbelievable opportunity, a chance to give back and try to make somebody smile in a really tough situation.”

While athletes throughout the department worked overtime to add to the holiday spirit, one of the most interesting acts this season came from the baseball team, which currently is in the middle of a trip to the Dominican Republic designed to mix a little preseason baseball with a lot of love.

The Jayhawks, who will have played eight games (six against Dominican affiliates of the Kansas City Royals and Cleveland Indians) by the time they return home Saturday, traveled south with philanthropy as a top priority.

“As you get older and the longer you coach, I think it becomes more important to you that the kids that play for you give back to the community and to less fortunate people in our society,” KU coach Ritch Price said. “When I put the trip together, I wanted it to be about more than just baseball.”

Mission accomplished. The Jayhawks, so far, have combined some kind of community service activity with their regular baseball routine nearly every day.

The itinerary called for a trip to an orphanage to spend time with children who average just three visitors per year, multiple trips to sugar cane villages, where the KU athletes will hand out much-needed health kits to workers who make $1 per day, and games against local teams, which will receive truck loads of baseball equipment and colorful KU gear.

“When I was there this summer, I took my KU pinwheel hats, and it was the most popular hat on that island,” Price said of KU’s multicolored caps. “I had people tell me it was the best looking hat they’d ever seen. It’s an unbelievable culture. The poverty’s off the charts; it’ll put a tear in your eye in a second and, yet, their passion for baseball is just amazing.”

Here’s a look at where else KU athletes have sought to make a difference this season:

• Members of KU’s Student-Athlete Advisory Committee were among the more than 50 organizations to decorate and donate a tree to Lawrence’s Festival of Trees benefiting The Shelter Inc. The trees were on display at Liberty Hall and were auctioned off Nov. 27. KU’s tree, spruced up by Madison Wagner (swimming and diving) and Shane Smith (football), was auctioned off for more than $1,000.

• Student-athletes and staff collected more than 100 coats for The Salvation Army and, later, helped sort the coats in preparation for distribution.

• Through the Adopt an Angel program, the KU rowing team adopted and provided gifts for three local children — two girls and one boy — and also helped set up The Salvation Army’s Joy Shop, which distributes toys and gifts to those in Douglas County who can’t afford to purchase them. The team took to social media sites to raise money to provide gifts that went beyond the children’s wish lists.

• KU collected items from fans for the Toys for Tots program at both the men’s and women’s basketball games Dec. 15 and 16.

“It’s cool,” KU men’s basketball coach Bill Self said. “And I think this time of year, (with) finals just getting over, any opportunity to give back, you always feel better.”