As someone who has visited nearly 50 countries, Raj Bhala feels at home in the world. But he feels most at home in Kansas, where he has spent the past decade transforming KU’s international law program into a world player. 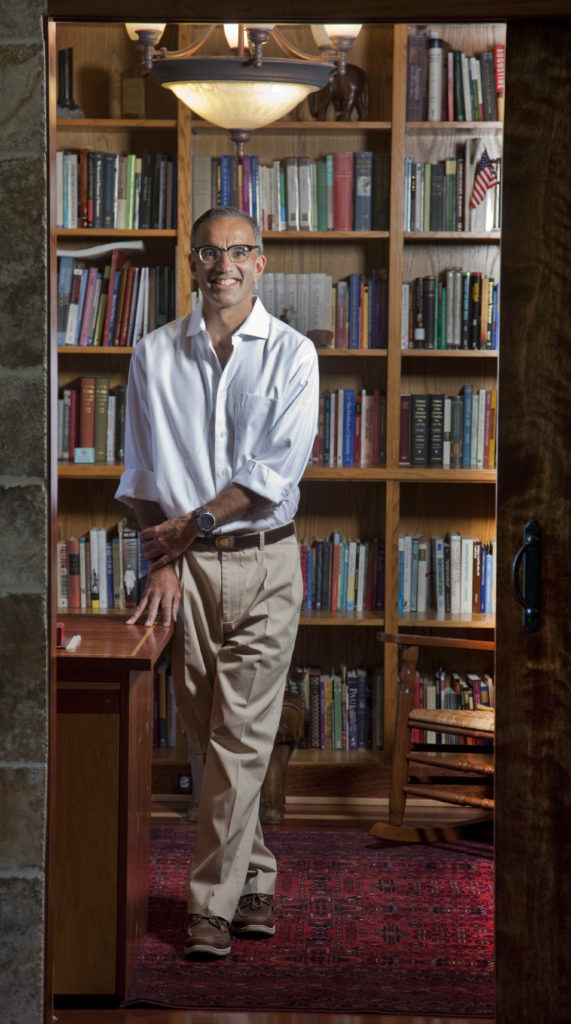 KU associate law dean Raj Bhala, pictured in his home, is widely recognized as one of the pre-eminent experts on international and Islamic law. In 2011, he received the George and Eleanor Woodyard International Educator Award, a university-wide award for outstanding contributions to international efforts.

Kansas, he insists, is more open-minded, better integrated, far humbler and less “me-oriented” than other places he has lived, most notably on the East Coast.

It’s not surprising then that one piece of advice he would give to incoming KU students is “Remember your good Kansas values (plain speech, directness, honesty) wherever you go.”

His other piece of advice? Go everywhere.

“Go global,” he says, “because the opportunities — the really interesting, exciting, lucrative, as well as service-oriented opportunities — are increasingly global ones.”

Originally from: Toronto, but raised in New York City and Wisconsin (has dual U.S./Canadian citizenship). His father is from India. His mother was Canadian.

Hobbies: long-distance running, including many marathons, and studying mathematics.

Place he’s never been that he’d like to visit: the Buddhist kingdom of Bhutan.

Bhala’s own work has taken him around the world, as a lawyer, an educator and an expert on international law. In between trips abroad, he has published extensively, including two highly esteemed textbooks, both the first of their kind: “International Trade Law: Interdisciplinary Theory and Practice” and, more recently, “Understanding Islamic Law.”

“He’s arguably the most well-recognized scholar on international trade,” says Beau Jackson, a KU law graduate working with the Washington, D.C., firm Adduci, Mastriani & Schaumberg. “He tried to convince me that KU was a great place to become an international trade lawyer, and he was right.”

Another former student, attorney David Jackson, tells of an interview he had with the U.S. Department of Agriculture in Washington. Prominent on a bookshelf in the office was Bhala’s text on international trade. “My professor wrote that,” he recalls beaming to the interviewer.

Pride in having studied under Bhala is a common response from his students, especially once they enter the legal field and fully grasp Bhala’s stature in the world of international law.

“He has contacts all over the world,” says Sarah Schmidt, a current student and research assistant of Bhala’s who is interning with the European Union Delegation in Washington. “I’ve taken every single class he offers.”

Originally trained as an economist, Bhala decided to pursue a career in law because it enabled him to have a more direct impact.

“I was very interested in problems of economic development in poor countries and in the problems of poverty. Economists were not directly addressing those problems,” he says.

After graduating from Harvard Law School, Bhala landed a job with the Federal Reserve Bank in New York, where he was appointed as the U.S. delegate to the United Nations Commission on International Trade Law. From there his interests and scholarship led him to academia. He had never imagined becoming a law professor, he said, but it’s been “a great fit,” both for him and, as it turns out, for KU.

“You get to be of service to people, and they in turn go on to serve others,” he said of teaching. “And you get to speak the truth to power,” noting that many of his publications are deeply critical of international trade rules “because they do not work to help poor countries.”

Before Bhala came to KU in 2003, the law school’s focus on international law was limited.

“Raj’s presence here at KU law has brought an array of benefits,” says KU professor John Head. “His addition to the faculty has allowed us to expand substantially the course offerings in international and comparative law, especially in the critical area of international business law.”

Bhala, he notes, has dramatically increased the school’s number of foreign students and has been the driving force behind two degree programs tailored to them. Additionally, Bhala teaches a course every year on Islamic law, or Sharia, not only to KU law students but also to military officers in Special Operations Forces at the Command and General Staff College at Fort Leavenworth. For most, the class is their first exposure to Islamic law, even though many of the officers had been stationed in Islamic countries. The same is true for his students at KU. Beau Jackson, when asked what he knew of the subject before taking Bhala’s class, answered “not a damn thing.”

This dearth of knowledge is one of the reasons Bhala — who, incidentally, is Catholic — wrote “Understanding Islamic Law.” Almost a quarter of the world’s population is Muslim, Bhala notes, and, from a financial perspective, about a trillion dollars is under management in Sharia-compliant investments. For students to be propelled into the professional arena in complete ignorance of a major global legal system strikes Bhala as nearly criminal.

“It’s malpractice for me to keep on teaching legal systems of declining regions like France or Germany when in fact the up and coming areas are India and China and Indonesia and some parts of the Middle East,” he says. “It’s my job to make sure that our students are prepared for the legal practice in the world that is developing.”

“Raj is a world-class scholar and outstanding classroom teacher, and he takes his obligations to the students very seriously,” he said.

Additionally, as Mazza and many others note, Bhala is an indefatigable promoter of the state and KU.

Did you know, Bhala asks, that KU law school admitted women regularly from its beginning in 1878 (75 years before Harvard did)? Did you know that it always admitted African-Americans, that it was never segregated? Did you know that KU has students from 110 different countries? He brims with pride about his adopted state, citing interesting details and anecdotes that would likely surprise a lifelong Kansan.

Perhaps that’s why he takes it personally when Kansas attracts bad national press, such as when it decided to de-emphasize the teaching of evolution, to abolish state funding for the arts, or, more recently, when Gov. Sam Brownback signed into law legislation that banned state courts from applying Islamic law. The governor’s decision was not only “completely unnecessary,” Bhala says, noting that the Supremacy Clause of the U.S. Constitution already forbids the application of Sharia, but it was also “an extraordinarily poor decision that is adverse to economic development in Kansas.”

“One of my jobs is to recruit to the law school the best talent I can –both faculty and students — and the reputational damage that this legislation inflicted on KU and Kansas is significant,” says Bhala, who frequently fields inquiries from around the world about what Kansas is actually like. His response? To tell the “really good stories” of Kansas, the ones that counter the stereotypes, the ones that make people want to come here.

He doesn’t know it, but for many who have crossed his path, Bhala himself is one of those stories.

— Assistant community editor Kim Callahan can be reached at 832-7148.