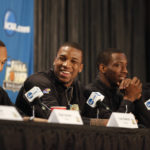 Kansas forward Thomas Robinson, second from left, smiles as he and teammates Travis Releford, left, Tyshawn Taylor and Jeff Withey respond to questions during a press conference on Sunday, April 1, 2012 at the Superdome.

KU coach Bill Self confirmed to the Journal-World on Sunday that Robinson would be turning pro. Self indicated he would say no more until the news conference.

The news of the 6-foot-10 Robinson’s leaving, of course, comes as no shock. It has long been believed Robinson would be entering his name in the 2012 NBA Draft following this, his junior season.

He’s listed as the No. 4 pick overall by draftexpress.com and No. 2 overall pick by nbadraft.net.

Robinson, who was a first-team consensus All-American and runner-up to Kentucky’s Anthony Davis for the Wooden Award and AP player of the year, averaged 17.9 points and 11.8 rebounds a game as the Jayhawks stormed to their eighth consecutive Big 12 title and reached the national championship game.

Last week, Self told the J-W’s Tom Keegan: “The thing is, he’s earned the right to move on. This kid finished second for national player of the year, consensus All-American, he’s going to get his jersey hung, won the league, took his team to the finals. And in the finals, everybody talks about Anthony Davis, who was great. Thomas had 18 and 17. Missed two dunks, had 18 and 17. He’s a stud, and it’s time. So many of us have said or believed you’ve got to strike while the iron’s hot. Iron’s hot for him.”

Banquet tonight: Today’s KU basketball banquet figures to be the most festive since the 2008 dinner that honored the NCAA champs.

Ninth-year coach Self believes a throng of 1,000 or so fans, who will break bread at 6:30 p.m. at the Holidome, are eager to recognize the accomplishments of this 32-7 team.

“I’ve gotten a lot of letters and several e-mails. I haven’t gone through all of them yet,” Self said of appreciative correspondence. “The thing that amazes me is from our Jayhawk Nation, the sense that I get, it was the most pleasant of surprises. I got the impression that we had tempered expectations enough and rightfully so that anything that happened like it did this year would be a bonus.”

After all, this is the KU team that played with no McDonald’s All-Americans and just one returning starter — Tyshawn Taylor — from the Morris twins-led 35-3 Big 12 title/Elite Eight team of 2010-11.

“You know this program has won more games than anybody in the history of college basketball the last six years. There has never been a run like we’ve been on as far as winning games,” said Self, whose team was 197-29 over that span. “You can say Florida was a better run. They won two (titles in going 68-11 overall in 2005-06 and 2006-07), we’ve only won one. Still, we’ve been on a terrific run, but this was going to be the transition year, without question. But you couldn’t tell Thomas or Tyshawn or those kids that.

“And they played at such a high level, and it wasn’t always pretty, but they bought into how we needed to play to win.”

His Jayhawks, nicknamed the “Comeback Kids” by junior guard Elijah Johnson, gritted their way to several come-from-behind wins in the NCAAs. KU led at halftime in just one of the six games — against No. 15-seed Detroit Mercy. The Jayhawks were ahead of Detroit by 10 after 20 minutes, but trailed Purdue by six and North Carolina State by one, were tied with North Carolina, and trailed Ohio State by nine and Kentucky by 14.

“It was a great team to be around,” Self said. “I felt like the ’08 team I probably had a better idea of what was going on around it because we were always ranked in the top five, all year long. And you just kind of felt the media attention and all that. Hey, this one, I was in the eye of the storm and didn’t have a clue what was going on around it. It was just a remarkable feeling.”

He has replayed the Kentucky game in his mind a few times. KU trailed by as many as 18 the first half. KU cut it to five late but could get no closer in a 67-59 defeat.

“During the course of the game, we missed three dunks,” Self said. “We executed perfectly on two plays down the stretch that most times you’re going to come away with five points, and you come away with zero. We missed some key free throws. That could have easily been a one-possession game. And what I told our guys all along: ‘We’re not going to blow these guys out, let’s get it in the last five minutes and see if the collar gets tight.’

“And we were one possession away from really making it a stressful-type environment, but Kentucky’s great. They’re better than us. But for one night I thought we could be better than them. We just weren’t that first half. We just dug ourselves too big a hole.”

Still Self can’t help but wonder, what if?

“We had a loose-ball play, we were down five, and we didn’t get the loose ball,” he said. “If we get it, it’s three (point game) because it was going to be a break-away layup. And we end up having to foul and they make free throws.”

He’s proud enough of the effort to be willing to watch the tape of the title game in coming weeks.

“I won’t look at it to learn anything from it. You don’t look at a tape and say, ‘We could learn from it if we just make our dunks.’ Geez, we just missed them, and they’re plays we’ve been making all year long. Kentucky’s just terrific. It’s hard to simulate that type of length. We think Jeff Withey’s long. He’s not long compared to Anthony Davis, and although Jeff is long, but compared to that, that’s just a whole different deal. He can guard a point guard, switches on ball screens. It was just a hard team to score on.

“Thomas rushed a couple of shots, but at the end of the day, I walked out of there sad for our guys that we lost because they were hurting so bad. They never ever dreamed that anybody could beat them. Very, very proud of them at the same time.”