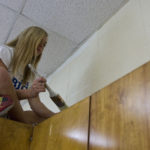 Shawnee freshman MacKenzie Rex finds a spot on top of a cabinet as she paints a classroom at Woodlawn Elementary School Saturday, March 31, 2012. Rex was taking part in The Big Event, in which KU students volunteer all across Lawrence doing things such as painting, gardening and weeding.

Standing at the top of a ladder propped against a house, Zack Leas reached into a gutter and scooped out leaves and mud, putting the gunk into a large paper bag.

His shoulders were sweaty from toiling in the sun: He had been working outside for a couple of hours already. At a house down the block, he and two of his Kappa Sigma fraternity brothers had spent the afternoon removing siding and screens for a local homeowner. No money changed hands. It was all volunteer work, done by Kansas University students participating in The Big Event.

As Leas and his two fraternity brothers cleaned a set of gutters, the owner of the home, Beth Pine, ambled out with three sweaty glasses of ice water, lemon plunked into each one.

“I’m thrilled that people are … helping me,” Pine said. “I can do this stuff by myself, but it would take so long. For me to clean the gutters it would take all weekend.”

Pine had first heard of The Big Event last year, the first time KU had it. Then she saw a page for it on Facebook and “liked” it. That was before she’d experienced the benefits herself. This year when she saw updates on Facebook indicating students were looking for work, Pine sent a message with a list of chores that were challenging for her. One of them was moving two golden lions sitting at the edge of her yard. The lions were too heavy for Pine, but Leas and the others collectively hoisted them.

Across town, Jordan Ashley plucked up debris and limbs scattered across a yard.

Ashley, of Olathe, is a sophomore and member of Alpha Tau Omega. He said days like The Big Event give students a chance to reinvent their image. When people think of KU students, they might also think of loud parties and scattered beer cans, Ashley said. But students can change that perception through volunteer work.

“This gives a good chance to say, ‘Hey we’re here to support the community, not just use it as a playground,'” Ashley said.

One of the larger projects for The Big Event was working on an incubator garden at John Taylor Park in North Lawrence. For this, students split into two shifts: one group worked from 9 a.m. to noon, the other from 1 p.m. to 4 p.m. Among the students in the afternoon group was Evan Dunbar, 20. Dunbar said one of the best parts of the day was seeing how happy and welcoming the community members who were receiving help were.

“The people we help get so involved,” Dunbar said. “They aren’t just watching us; they brought water and food for us and were just so happy to see us. For them to get so excited, it makes us more excited.”

Dunbar is a sophomore from Texas, the state where The Big Event started. At Texas A&M, the school where the tradition originated, The Big Event is so ubiquitous, students often get the day off school to participate. Dunbar hopes that KU’s Big Event tradition, which is only just beginning, will eventually attract massive crowds, too.