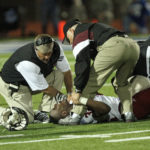 Leavenworth ? The play was quick.

Senior running back Charles Jackson took the hand-off and went down almost immediately for no gain.

Just as he had been doing all night, he wouldn’t go without a fight. Jackson gave the defender a stiff-arm, but was yanked down awkwardly. In a few seconds, the play was over. The 30 minutes that followed could have lasted an eternity.

Jackson began to writhe in pain on the ground, favoring a horrible-looking injury to his left leg as medical staff and coaches ran over to comfort him. Coach Dirk Wedd was on his knee next to him for the half hour it took for an ambulance to load Jackson onto a stretcher and take him away to a nearby hospital.

Lawrence beat Leavenworth, 35-13, on Friday night, but it was a somber night for the Lions.

Jackson was having one of his best games of the season with 128 rushing yards and two touchdowns and eight minutes still left before his injury.

Aside from that, though, the Lions didn’t play well.

Though they sustained a double-digit lead for most of the game, the Lions had four turnovers and never truly put the Pioneers away.

“It was just one of those games you never felt comfortable,” Wedd said.

Jackson scored the first two touchdowns for Lawrence, then a touchdown from junior quarterback Brad Strauss to senior receiver Anthony Buffalomeat extended the lead to 21-0 in the first quarter.

In the second quarter, Strauss ended consecutive drives with interceptions, and the Pioneers capitalized on one with a touchdown.

Strauss shook off the turnovers and found junior Drake Hofer in the end zone for a touchdown right before half, pushing the lead back to 21.

The Lions (2-2) mishandled a few snaps in the second half, and twice the ball found itself with the Pioneers (0-4). One resulted in a 55-yard touchdown, but Lawrence came right back, and Strauss hooked up with Buffalomeat for a second time in the end zone.

Though the Lions won, they were in no mood to celebrate.

The severity Jackson’s injury is still unknown, forcing Wedd to find a replacement for his top rusher as well as a teammate who never showed a frown.

“We’ll come through this,” Wedd said. “I’ve got a great bunch of kids who have huge hearts, and they’ll overcome this.”

Junior Jordan Brown replaced Jackson as Lawrence’s go-to running back, though it was a small sample size near the end of the game. It looked as if the team wanted to run the clock out and take the victory so it could put an end to the tumultuous night.

After the game, the team had an elongated talk. It was undoubtedly emotional as the team walked silently out of the stadium, and several members patted Wedd on the back.

“You don’t coach for 35 years without loving kids,” he said with tears welling up in his eyes. “He’s part of the family. When a family member is hurt, you care for him.”