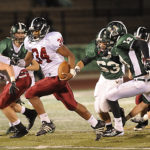 Lawrence High coach Dirk Wedd went to junior running back Tyrone Jenkins Saturday morning to give him a new challenge.

Someone had to replace the three quarterbacks who had gone down for the Lions the past couple of weeks. That someone was Jenkins.

With a patchwork offense and slightly depleted defense, Jenkins helped lead LHS to a 20-0 victory against Free State High on Friday night.

It came on a night Olathe Northwest and Olathe North’s game had huge implications for the Lawrence teams’ playoff hopes.

If O-North won, then all LHS had to do was win at FSHS. If O-Northwest won, the Lions had to win by at least eight points. O-Northwest blew out O-North, 56-28. The Lions beat the eight-point spread and knocked the Firebirds out of playoff contention.

“They’re resilient,” Wedd said of his players. “The way they handle adversity is amazing.”

LHS (6-3) scored on its first possession, a 12-play, 44-yard drive, with a three-yard run by Jenkins. FSHS (6-3) didn’t have a first down when Lawrence’s Anthony Rosen kicked a 30-yard field goal in the second quarter. Surely, FSHS was going to make a run and stop LHS’s unexciting offense.

The Firebirds did neither.

The Lions’ offense was nothing like the open and explosive juggernaut that it has been for the majority of the season. Instead, Wedd relied heavily on his running backs and played more tight-end formations so Jenkins could do most of the pounding from the quarterback position. There weren’t many explosive plays, but the plan worked. He rushed 37 times for 122 yards. And he completed three of four passes.

There was one play that went more than 25 yards. Jenkins hooked up with Erick Mayo for a 68-yard touchdown, pushing the score to a 17-0 lead with a little more than 5:00 to go in the first half.

At that point, the eight-point lead was looking safe.

“We weren’t going to let up until the fourth quarter,” Mayo said.

Mayo also had two interceptions, one each off of Kyle McFarland and Joe Dineen. The Firebird quarterbacks had Lions draped on them almost every drop-back, with sophomore Drew Green and juniors Kharon Brown and Asaph Jewson having huge games.

The defense stifled the Firebirds, holding a team that averages almost 24 points per game to nothing.

“We’ve been a good defense all year,” he said. “The coaches put us in a great situation to win the game. We just went out and executed it tonight.”

The Lions only had two close calls, the first coming late in the third quarter. LHS junior Kharon Brown recovered a fumble by FSHS and got it just inside the Firebird two-yard line. But a situation that should have yielded points turned into a fumble the other way.

The second scare happened early in the fourth quarter when the Firebirds got their offense going, getting yards in chunks of 19, 15 and 9. They drove to the LHS 37-yard line and stalled. Rosen tacked on a 29-yard field goal the next Lion possession, and the Lions secured a bid to the state playoffs.

It seemed the only people not stunned at the outcome of this game were the players and coaches. The injuries to junior quarterback Brad Strauss, senior running back Charles Jackson, senior center Brady Murrish, junior receiver/ quarterback Drake Hofer and senior linebacker Jake Vinoverski for a few games, among others, were daunting.

But as Wedd said before the game, the Lions were going to figure something out.

Except no one was expecting this.

“You don’t sleep much,” Wedd said about dealing with injuries, “but we knew what we had, and we had a lot of confidence in our kids.”