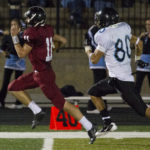 After all the Lawrence High football players cleared out of the locker room, they left a message written in blue marker on the whiteboard.

The 31-0 was the score of Lawrence High’s home victory against Shawnee Mission East Friday night. And the Charles stood for senior running back Charles Jackson.

“He called us earlier and told us to go hard and do our best,” junior running back Tyrone Jenkins said. “We came out here and did it for him.”

Jenkins took most of the running back duties in place of Jackson, who is out for the season with a broken fibula and dislocated ankle, and finished with 52 yards on eight carries with a touchdown.

There were a lot of questions surrounding the Lions coming into the game on how the offense was going to function without its leading rusher. Lawrence’s offense quickly ended any doubts. The first drive lasted three plays and 55 seconds, ending in a Brad Strauss 54-yard touchdown run after he bolted past the entire SM East defense.

Before the game, Lawrence coach Dirk Wedd said that without Jackson, the team would be a lot slower. But Strauss might have negated that notion with his most dominating performance of the season, especially on the ground.

And that raises a question about the junior quarterback: What in the world is he?

He ran nine times for 192 yards and two touchdowns, including a 72-yarder in the fourth quarter where the defender had a perfect angle for a tackle had it been a normal quarterback. Strauss just flat-out beat him.

“I though he might have had a chance on me,” Strauss said. “I just run scared.”

He also had two 50-plus yard completions, both to Erick Mayo and one going for a touchdown. Strauss finished with 186 passing yards, and for the first time this season, he didn’t throw an interception. Furthermore, LHS didn’t turn the ball over.

“We didn’t have to take too many chances,” Strauss said. “Just run it up the middle.”

The Lions (3-2) gained the early advantage and played solid defense to expand their lead. After they established a dominant 24-0 lead at halftime, LHS only had to throw it five times in the second half. Strauss’s speedy legs and the running backs took care of the rest.

The backups came in early in the fourth quarter to finish the game.

It was the most complete game the Lions have had this year with a mistake-free offense and an unrelenting defense. Still, Wedd scoffed at the thought that his team can’t force any turnovers of its own.

“There’s not one high school in the country who has one turnover after five games,” he said. “It’s ridiculous.”

But that issue couldn’t take away what the night meant. In an inspired effort, the Lions showed they are still a force even without their star runner. That’s why they dedicated this victory to Jackson.

“We don’t want to let this season get away just because he’s injured,” Strauss said.