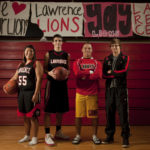 Lawrence High has a surprising fall season of sports with an unexpected uprising from football, a breakthrough for soccer and a promising future for volleyball.

Even as underdogs, this fall’s Lions found ways to have success when it truly mattered, and this winter, Lawrence High’s other teams are in position to do the same.

The preseason has been kind to the LHS wrestling team.

In the Kansas Class 6A rankings, the Lions are ranked first heading into the season, and several wrestlers are also highly ranked.

“We’ve got a target on our back to prove that we earned that No. 1 ranking,” fifth-year coach Pat Naughton said.

Eight of the 10 state qualifiers from last year are back, led by seniors Reece Wright-Conklin, Brad Wilson and Nick Pursel, with juniors Andrew Denning, Hunter Haralson and Caden Lynch. All of them are listed in the top five of their respective weight classes in the state. Freshman Tristan Star will look to make immediate contributions as the third-ranked wrestler in the 106-pound weight class.

With all the wrestlers’ experience and the team’s label as the best in the state, Naughton said the challenge will be keeping his Lions grounded because no one wins championships in November.

LHS hosts regionals this year, so there is an extra incentive to have a good season for the home crowd.

The highest LHS has ever finished in wrestling is fifth in the state. The Lions tied for sixth last year, and it’s going to take a lot of hard work just to get back to that point.

“If we could just rely on our talent, then we wouldn’t need to practice,” Naughton said.

Since their sophomore year, seniors KJ Pritchard, Anthony Buffalomeat and Logan Henrichs have been groomed to be the nucleus of 2011-12’s team.

They have improved each year and now have their last — and perhaps best — shot at making the state tournament.

“We were building for the future,” third-year head coach Mike Lewis said. “We will hopefully see how that pays off.”

The Lions turned heads last year after upsetting top-seeded Olathe South in the sub-state tournament, only to fall to Leavenworth in the next game. They were underdogs last year, but expectations are higher this year, Lewis said. LHS won’t be overlooked coming into this season.

The three seniors reprise their starting roles, with junior Shane Willoughby at point guard. The new face in the lineup is 6-foot-6 sophomore Bryce Montes De Oca, who will be starting at center for the Lions.

And for those wondering about junior Brad Strauss and his ankle injury, don’t expect to see the football phenom on the court for a while.

“Most likely, his basketball will take place in January and February,” Lewis said.

In his third year as the girls basketball coach, Nick Wood is starting to get all the right pieces.

The upperclassmen have been in Wood’s system for a majority of their careers now, and the rest of the roster seems to be on the same page.

“This is the most depth we’ve had in our program the three years that we’ve been doing this,” Wood said. “We think with that depth, it’s going to create really competitive practices.”

Several players didn’t get much playing time last season, so up-and-comers such as Kylie Seaman, Monica Howard and Free State High transfer Kionna Coleman will have to get experience fast.

The team is coming off a first-round sub-state loss to Olathe Northwest after a 6-15 season. And with a tough Sunflower League, Wood said the Lions need to work their way up the conference this year.

The good thing about this team, he said, is that there could be a new leading scorer every night to fill the void.

“I feel like that makes us a more dangerous team,” Wood said.

Led by a sturdy group of seniors, the experienced Lions want to finish better than last year’s sixth place in the Sunflower League and 17th place at state.

Coach Kent McDonald says he doesn’t have the year-round swimmers that schools such as Free State have, which makes the road even tougher.

He does, however, have seniors Zach Andregg, Dylan Orth, and Reid Hildenbrand and junior Adam Edmonds, who all ran cross country in the fall.

One would think that the endurance training in cross country would translate to the pool when McDonald puts his swimmers into the long, 500 meter races.

“It’s a different type of endurance,” he said. “It’s a lot harder than running. They have trouble doing it.”

But the work ethic did carry over, McDonald said, which may be more important. Andregg, who uses his swimming and cross country training to tackle triathlons, was a hundredth of a second from setting the school record in the 100m freestyle last season. He is within reach of several other LHS records, so the team is eager to watch Andregg be the first LHS swimmer in years to break a school record.

Even though many of the veterans were pursuing other sports during the offseason, they are still reliable in the pool, McDonald said.

“We’ve got three lanes, half the pool, of people who know what to do,” McDonald said. “We have some upside if we can get them all in-shape.”