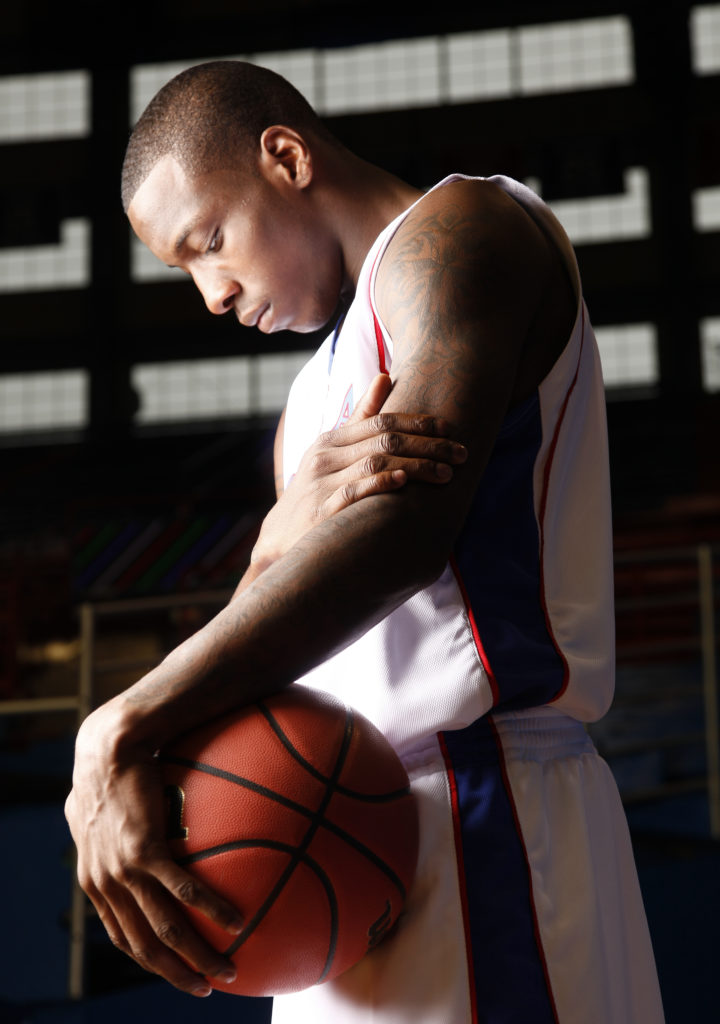 Kansas university guard Tyshawn Taylor poses with a basketball. Taylor has been learning from mistakes made a year ago during the 2009-2010 season.

Talkative Tyshawn Taylor — who likes to express himself through both the spoken and written word — had a heart-to-heart conversation with Kansas University basketball coach Bill Self in early August.

In an informal meeting, Taylor, KU’s junior combo guard from Hoboken, N.J., asked his boss to remove the muzzle — to unzip his lips — by giving him the freedom to re-open his controversial Facebook webpage.

“I hit him up one day. I was like, ‘You know coach, I feel like it’s been a while since I had any,”’ Taylor said, referring to Facebook privileges.

They were stripped by Self last January after Taylor implied on the social media Internet site that he might leave KU over frustration about his role on the 2009-10 team.

“I told coach it’s a way to keep up with my friends back home, people I can’t talk to on a regular basis. I told him, ‘I feel I learned my lesson. You can monitor it or do whatever, but I feel I should be able to get it.’

“It’s something I’ve always been doing. I listen to music, and if I hear something, I throw stuff on there … instantly,” Taylor said of lyrics. “Now I think about it. Sometimes I even change words around. 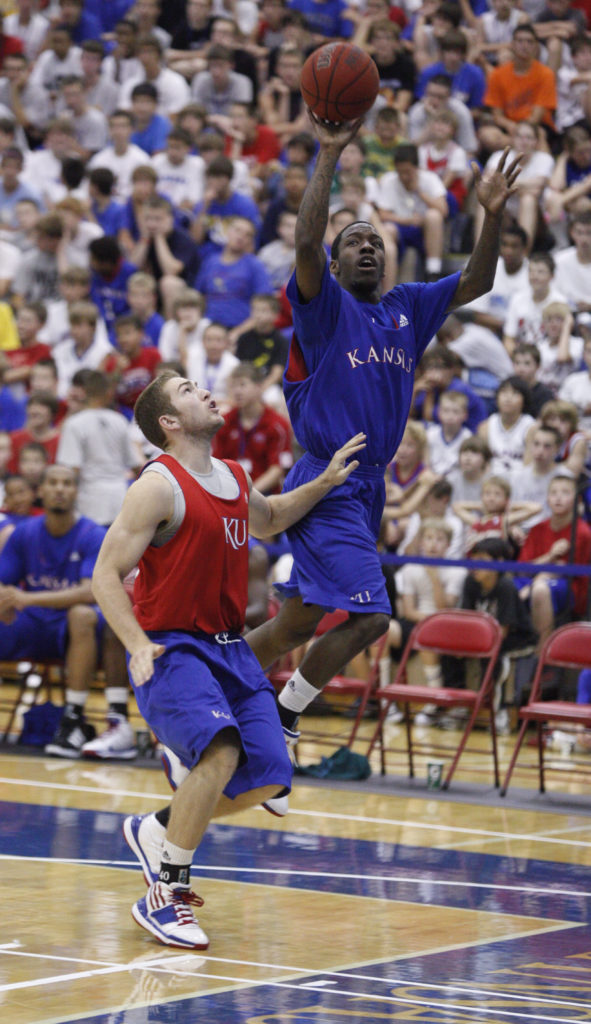 “I know I can’t do it. There’s no point in me even thinking about doing it. If I do think about it (posting potentially explosive stuff), I’m thinking, ‘Oh no. You can’t do this,”’ Taylor added emphatically.

Now an upperclassman, Taylor said he’s learned to police himself.

“I make mistakes, but I learn from my mistakes and try to not make the same mistake twice,” said Taylor, who, through his actions — a productive (and quiet) offseason in the weight room and on the practice court — has re-gained his coach’s confidence.

“I mean, I am not giving him any reason not to trust me,” Taylor said. “I think trust is earned. Once somebody trusts you and then they feel they can’t, you have to earn it back. I’m trying to do everything to get him to trust me, because I know that’s a big part of me being a point guard on this team.

“I can’t be a point guard if coach doesn’t trust me.”

This is about the time last year when things started to sour for Taylor, who had a promising freshman season. He suffered a dislocation of his left thumb fighting the football team outside the Burge Union.

“I am not fighting anybody. I can tell you that. No fighting for me (again), man,” Taylor exclaimed nearly a year to the day from last year’s scuffle. “That was just a bad situation that kept getting worse and worse. It was a couple guys that had a misunderstanding. It was nothing about not liking the football team. The football team has a lot of guys on it. I don’t see half of them.

Before burying all mention of last year — and looking ahead to his fresh-start junior campaign — Taylor was willing to re-live the frustration of losing his starting spot in the lineup twice in 2009-10.

“It sucks not starting. I love starting, especially when you get used to it, when you get comfortable,” said Taylor, who started 25 of 36 games, averaging 7.2 points off 43.8 percent shooting with 121 assists against 61 turnovers.

“I think that’s why coach did it (demoted him). I think he felt I got comfortable. It definitely lit a fire under my butt,” added Taylor, who was replaced the first time by Elijah Johnson during a two-game stretch in early December and second time by Brady Morningstar before the Jan. 20 Baylor game. He returned as a starter versus Oklahoma on Feb. 22 and started the rest of the way.

“I had an up and down year. I just want to be consistent,” Taylor said. “If I start starting, I want to finish starting. That’s part of being consistent. I think if I get better, I think there’s no reason I shouldn’t be starting.”

In an attempt to “get better,” Taylor has been working on various aspects of his game, like …

• His strength and conditioning.

“I definitely am the smallest on the team. Me and Brady were neck and neck and then I guess Brady started eating a lot,” he joked of 6-4, 185-pound Morningstar.

“I think it’s obvious I’ve got to become more of a consistent jump shooter, outside shooter and more of a threat from that position,” Taylor said. “I focused all summer on shooting jump shots off the dribble, coming off left two dribbles, coming off right two dribbles, one dribble pull-up.

“It (shot) looks pretty good in pick-up. It looks better. It feels better. I feel better about it. I think confidence is a big thing with your shot.”

Taylor’s teammates have noticed the improvement.

“It goes in more,” senior guard Morningstar said of Taylor’s jumper. “Not to be funny … he is making more shots off the screen, more three-pointers. I think it adds to his game, obviously when they have to guard his outside shot. The best thing he does is get in the lane and lay up a floater.”

The two are expecting a lot from Taylor this season, which opens with the Oct. 15 Late Night in the Phog.

“A ton of energy when he’s on the court, to just play hard, go have fun,” Morningstar said. “He’s a type of player the crowd loves to watch because he’s so athletic and can do this and that.”

Noted Morris: “I think he’s matured a lot and will continue to take on the role of being leader on the team. That’s the main thing we need him to do.”

As far as the man whose opinion counts the most, Self has let bygones be bygones. He joked about Taylor’s past troubles, introducing him publicly at last spring’s postseason banquet as “Tyshawn Facebook Taylor.”

Self expects Taylor to continue to play like the guard who, according to scouts, more than held his own against the likes of Duke’s Nolan Smith, Villanova’s Maalik Wayns, UCLA’s Malcolm Lee and Xavier’s Terrell Holloway, at this past summer’s Adidas Nations Experience in Chicago.

“When Ty is playing well, he gives us a little more oomph,”’ Self said. “He’s a guy on our team who can go make a play by beating a guy off the bounce. He gets to the line by attacking the rim.

“I think his ceiling is still very high, and he has a couple steps before he gets to that ceiling. Hopefully he’ll play at that high level the rest of the way.”

Of course, it’ll help if there are no more off-the-court distractions.

“I see him as a great guy,” Markieff Morris said. “It was a tough year for him last year, which was immaturity. He was just not being mature, not knowing what was right, what was wrong at the time. That was the main reason he struggled. He’s matured a whole lot.”

“I love him as a person. I wouldn’t trade anything about him,” Morningstar said. “He’s an East coast guy, talks loud. I’ve got to tell him to be quiet sometimes. I guess that’s how they are,” Morningstar cracked.

Taylor — he has played for tough taskmasters in Bob Hurley at St. Anthony High School in Jersey City and Self at KU — said he’s more than willing to take the criticism that’s been dished his way by KU’s coaches and fans.

“I’m sure people get the wrong idea about me sometimes. I’m not going to sit here and try to clear that up,” Taylor said. “I think people who know me know what type of person I am and know who I am.

“I think I’m a good dude. I think I smile a lot. I think I’m funny. I am just a nice guy. I’m just a kid, too. I think all the KU fans support me. I think some fans out there are rough. I think it’s that way for any fans. I love all the Tyshawn Taylor fans,” he added with a laugh.

For the record concerning the Facebook flap, Taylor said even in his most troubled times, he never seriously considered leaving KU and its legion of fans.

“I got upset at times, and I was like, ‘Man I can’t do this,”’ Taylor said. “Then when I’d sit down and think about it, I’d say, ‘What’s better than this? What am I gonna do, sit out a year and go to a lesser division school not as good?’ Why would that even be a thought? Sometimes you get frustrated and feel things are so overwhelming you can’t handle it any more. At times I felt like that last year.

“It was a rough up-and-down year for me. I never took any action. I never talked to any other coaches. I never even told anybody besides maybe my mother, ‘I can’t do this any more.’ I never put a plan aside, ‘I’m going to do this if this happens.’ I’d be wasting a year to go to not as good a school. It doesn’t get any better than this right here.”

While he acknowledges that a big year might make him think about leaving for the NBA after three seasons — “when you are in college and are at this level, the NBA of course is your dream. You think about it a lot. Who doesn’t?” he said — his major goal involves producing for this year’s KU team.

“I just want to be consistent and win, man,” Taylor said. “Winning is so much fun. I think we’re really going to have a great team this year.”