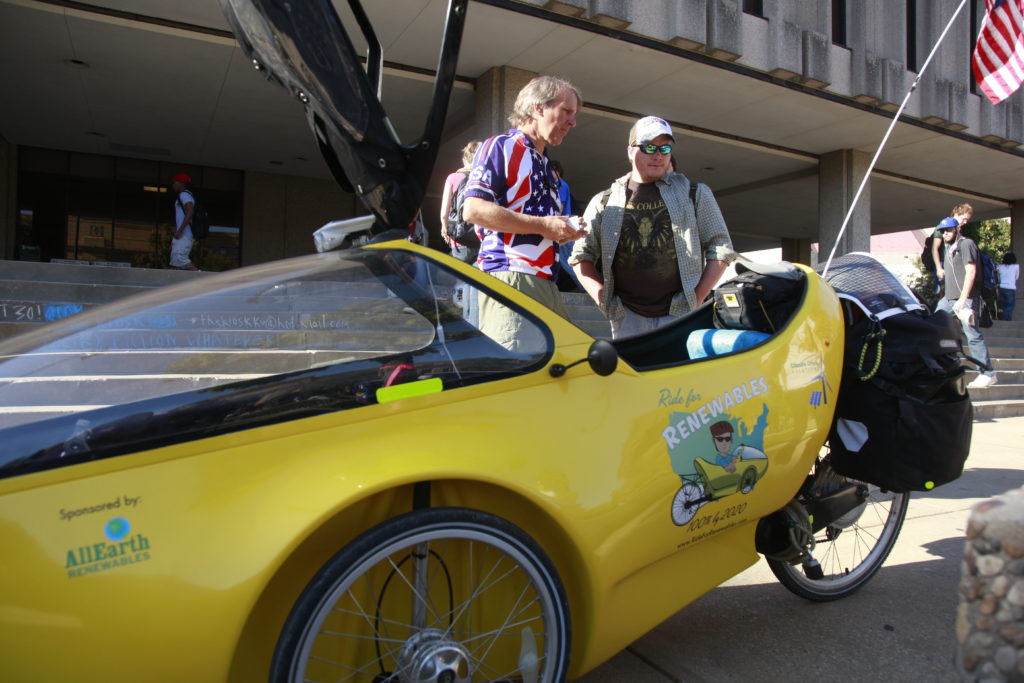 Colorado resident Tom Weis, left, showed his150-pound tricycle to Stuart Pence, 25, a sophomore from Pratt. Weis is on his way to Washington, D.C., to convince lawmakers to create a 100-percent renewable energy grid by 2020.

Traveling through one small town at a time, Tom Weis aims to gather the support to convince lawmakers to create a 100-percent renewable energy grid by 2020. 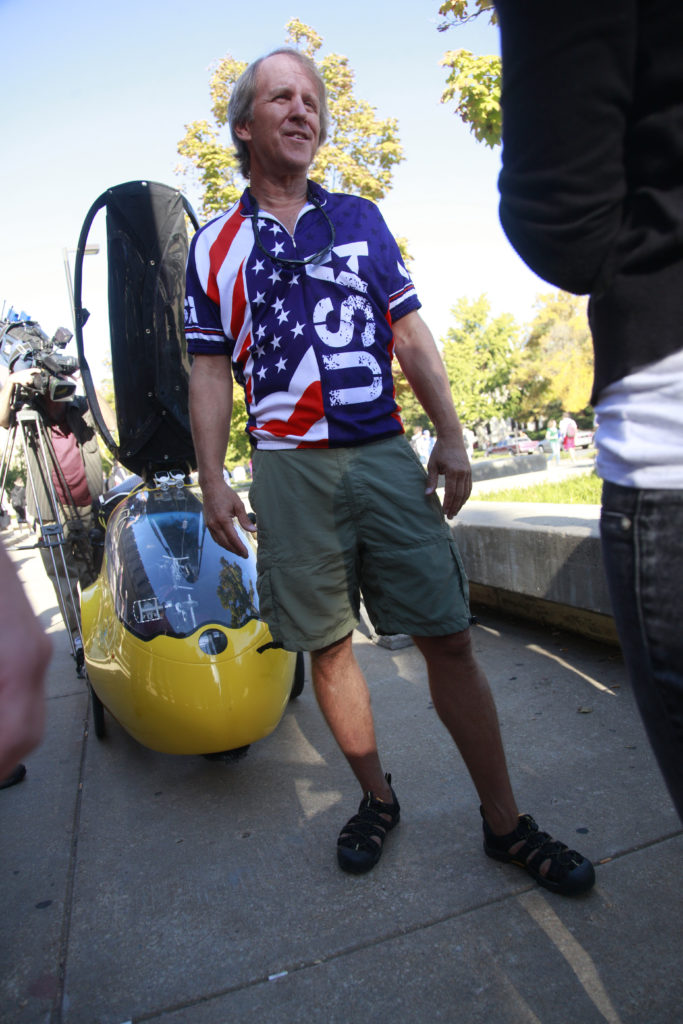 Colorado resident Tom Weis made a brief stop in Lawrence on Friday, Oct. 8, 2010, on KU campus to educate KU students about renewable energy. 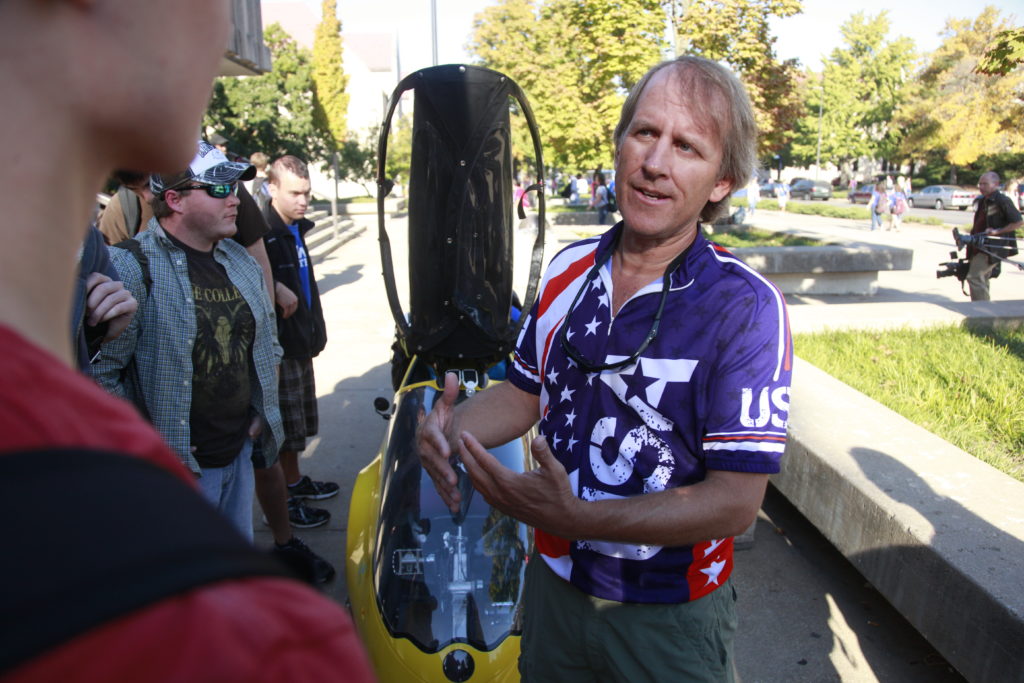 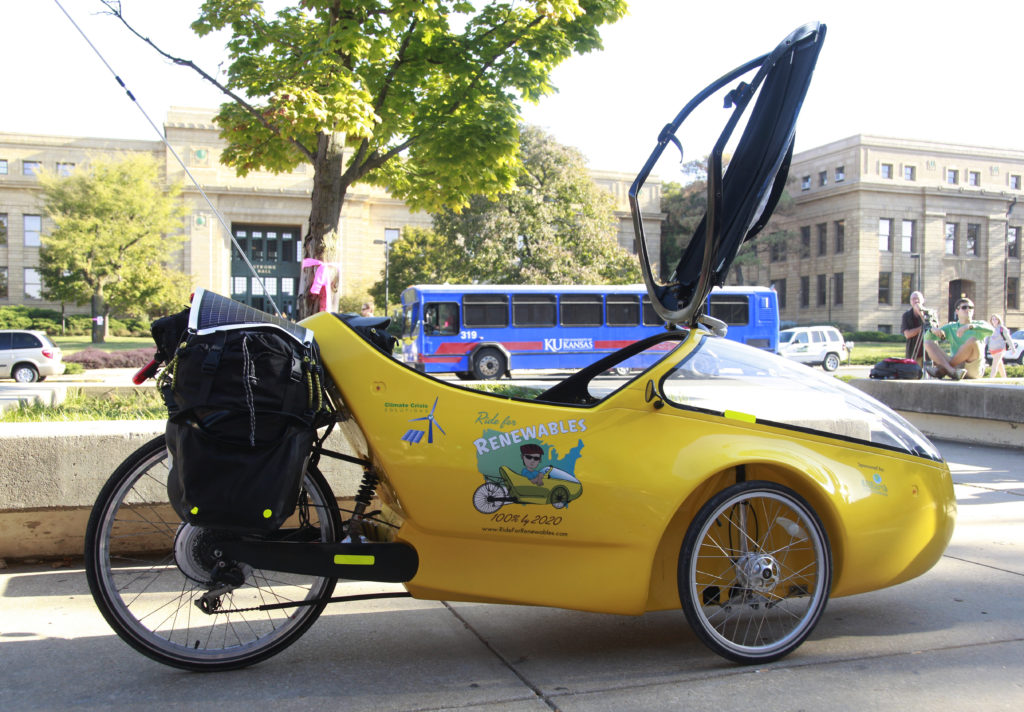 Colorado resident Tom Weis is riding across the country to raise awareness for renewable energy and stopped on KU campus to speak about it. His bike is tricked out with solar panels, an electric motor and three wheels.

It’s a goal that Weis calls a “green energy moon shot for America” and one he is pursuing by pedaling his bright yellow rocket tricycle from Colorado to Washington, D.C.

“It’s a huge goal, but we have a huge problem. The solution has to be commensurate with the problem,” Weis said.

The one-man renewable energy revolution stopped on the steps of Wescoe Hall at Kansas University Friday morning where Weis was lecturing more than 200 geography and environmental studies students.

“It’s time for our generation to get up and do something,” Weis told the crowd.

Since Sept. 21, Weis has been riding his 150-pound tricycle, which has a bright-yellow carbon fiber shell, an electric motor for an extra boost to get over hills and solar panels for powering headlights, blinkers and an iPhone.

“It looks and feels like a rocket,” Weis said.

Weis left from Boulder, where he is the president of Climate Crisis Solutions, an environmental consulting firm committed to solving the global climate crisis.

He rode across Kansas on U.S. Highway 36 and 24, camping in city parks and staying in people’s homes along the way.

On his 2,500-mile journey, Weis plans to visit examples of renewable energy sources, such as the commercial wind farm outside of Concordia.

Weis thinks America can get to 100-percent renewable energy by using solar, wind and geothermal energy and for everyone to be more efficient in how they use it.

“The stakes are so high that we need to be coming together as Americans to get the job done,” he said.

After Weis finished his talk, students crowded around the trike asking questions and taking pictures with their phones.

“I think it is awesome,” said Stacy Ash, who was taking photos for her dad and to post on Facebook.

Weis plans to spend a few more days in Lawrence, visiting the Farmers Market and participating in this weekend’s bike activities surrounding Octoginta.

By mid-November, Weis wants to reach Washington, D.C., where he will share his goals with Congress and the White House.

“This is really heavy stuff. We are dealing with saving the planet for our children and future generations and trying to rescue our economy. But it can also be a lot of fun,” Weis said. “We need to bring some joy back into the planetary protection movement. And, that is partly what this ride is about.”