Saturday’s Tonganoxie St. Patrick’s Day Parade will have a touch of pink 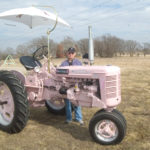 Harold Denholm shows the Farmall tractor that he painted pink in honor of his wife, Aileen, who died of breast cancer.

Tonganoxie ? Most of Tonganoxie will be going green for Saturday’s St. Patrick’s Day Parade and Leprechaun Games.

Harold Denholm will be an exception. He’s going pink.

Harold and his son, Greg Denholm, have restored a 1951 tractor and painted it pink in remembrance of Aileen Denholm, Harold’s wife and Greg’s mother, who lost a battle with breast cancer Sept. 22, 2007.

The 22nd annual Tonganoxie St. Patrick’s Day Parade will start at 10 a.m. Saturday in downtown Tonganoxie. After the parade, various businesses will be offering “leprechaun games.” A biscuits and gravy breakfast will start at 8 a.m. and a corned beef and cabbage dinner is from 10:30 a.m. to 1 p.m.

All festivities will take place on Fourth Street in downtown Tonganoxie.

The father and son have taken the Farmall tractor to various tractor shows and are making a circuit of parades, including Saturday’s parade through downtown Tonganoxie.

The formerly red tractor was known as Mom’s Tractor for many years because Aileen would use it at least weekly to mow on the family’s rural Tonganoxie farm. The tractor now sports magnets that say “Mom’s Tractor” as well as breast cancer awareness magnets and an umbrella with stitching that pays tribute to Aileen, known in Tonganoxie for her invovlement in the local VFW Women’s Auxiliary, 4-H and square dancing.

When the tractor comes down the parade route, spectators may notice it’s a Farmall “Super C” tractor. Now, it’s known as the “Super C”ure as the family continues to raise awareness about breast cancer.

At one tractor show, Linda Sturgeon, Harold’s daughter, was encouraging women to have mammograms. One woman told Sturgeon that she has recently lost her job and was therefore unable to afford a mammogram because she had lost her health insurance. Sturgeon provided her with literature about free mammograms.

Saturday’s parade will be the second for Mom’s Tractor, which previously was entered in Leavenworth’s Veterans Day Parade. Harold plans a return trip to Leavenworth next Wednesday for that community’s St. Patrick’s Day parade.

“Everybody always makes it a big deal for my birthday,” Harold joked, noting his birthday also is on March 17.

It’s doubtful the tractor will have any birthday banners or green decorations.

“It’s hard to camouflage pink,” Greg said with a laugh.