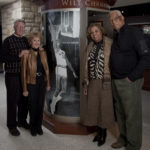 Wilt Chamberlain’s sister, Barbara O. Lewis, second from right, and her husband, Elzie, right, are in town this weekend for the KU games along with former Iowa State player Gary Thompson, left, and wife Janet.

Wilt Chamberlain, home from school for the summer, had brought a guest, Elzie Lewis, to stay with his family in Philadelphia. They arrived in the middle of the night. Introductions would have to wait.

“The next day I was sitting on the porch and these two young ladies were standing on the corner,” Lewis recalled Friday over lunch. “I hollered up to Wilt: ‘Wilt come quick. There are two fine ladies on the corner.’ Wilt races down the stairs and says, ‘Where?’ I said, ‘Right there.’ He said, ‘Aw man, that’s my sister.’ I said, ‘That’s your sister, huh?’ From then on we became great friends.”

Elzie went on to team with Chamberlain with the Harlem Globetrotters and would marry Wilt’s sister, Barbara, one year Wilt’s junior.

Barbara, one of William and Olivia Chamberlain’s 11 children, didn’t call her closest brother Wilt. For as long as she can remember, she called him “Dip,” a moniker pinned on him by a foster brother because Wilt had to dip under the arched doorways in the Chamberlain home.

Barbara, who now resides with Elzie in Las Vegas, never saw her brother play for Kansas. She will witness her first games played in Allen Fieldhouse today when she attends, with Elzie, the KU women’s game against Texas at 1 p.m. and the men’s game against Iowa State at 7 p.m.

“I’m really looking forward to it,” Barbara said. “I hear about all this noise. I’m told it’s even louder than the games in Philadelphia. College games are just so much more emotional. They’re wonderful.”

When Wilt played for Kansas, Barbara worked in Philadelphia during the day and attended business school at night. The local paper would inform which Kansas games could be heard on the radio in Philadelphia.

She played alongside him, jax, hide-and-seek and other games in the street, long before she listened to him play basketball on the radio. Just remembering the “very dangerous things” she watched her brother do made her cover her eyes all over again.

“He would jump off the roof on top of the garage, or jump from one barn across to another,” Barbara said. “He had no fear. When we lived in California, he had the highest apartment in the building he built. He would jump off that building and go into the pool. My mom would do it with him and she had to be 60 at the time.”

Barbara laughed when she thought back on her brother’s obsession with the Charles Atlas advertisements in magazines, the ones with the boy lying on the beach, hands behind his head, getting sand kicked in his face by the bully.

“He was this bony, skinny, gawky guy and he would say, ‘I am not going to have sand kicked in my face.’ He would order all that stuff, the cream and the dumbbells,” Barbara said. “He would do squats and bends with milk bottles. He built up that upper body and he would never stop exercising even when he was sick, sick, sick. He would have died sooner if he hadn’t done all that exercise.”

Wilt, Barbara said, wanted to be the best athlete in Philadelphia, and he wanted his sister to be the second-best.

“He wanted me to be like Wilma Rudolph,” she said. “He loved female athletes and always supported female sports. I was a good runner, and he was determined he was going to make me the fastest runner in the elementary school.”

Wilt would grab his sister’s hand and run around the field at the neighborhood recreation center.

“He’s taking these long, giant steps, and I’m dragging along with him,” she said. “I would be so tired. And he never got tired. Never got tired.”

When the race came, Wilt got his wish. He was the fastest boy in his class, Barbara the fastest girl in hers. Then everybody in the school competed in the same race when Barbara was in sixth grade.

Barbara recalled the moment it became clear to many that her brother, called “Dip,” “Dippy,” and “Dipper,” had something special. It came during his final game at Shoemaker Junior High.

“Someone threw the ball to him so fast,” she said. “He was by the wall and in order to get the ball in the hoop he dunked it. Well, that was the beginning of the Wilt Chamberlain story. Everybody just went crazy because nobody had ever seen anybody dunk. And he didn’t mean to dunk. There was nowhere else to go, so he dunked it.”

Next stop for Wilt was Overbrook High. Every time Barbara sees the famous photograph of Wilt tying his sneakers while wearing a Kansas uniform, she thinks back to the day of his first high school game.

“He had just washed his shoestrings — people kept themselves a little neater in those days — and put them on the stove to dry,” Barbara said. “He opened the oven door and put his socks in at night to dry. I told them they weren’t quite dry and he would catch pneumonia. He said he’d be moving around so fast the socks would dry.”

Brother and sister were sitting on the top step when Wilt was tying his shoes and he turned to Barbara and said, “Well, this is the beginning of me being a basketball player.”

“He was so good-natured, so funny, so kind,” Barbara said. “I credit my mom with that. She emphasized to him that you are different and because of that you are going to be looked at and you are going to be stared at and you must take advantage of that in a good way. You must always keep yourself well-mannered and kind. I think she thought if she made that number for him it would be the beginning of him overusing his power.”

“That would never have worked in my home,” she said. “That’s where parents have to step in and make a difference. Wilt had to wear No. 5 all during high school. We have a real thing about manners. My mother would say it’s so simple to use good manners. Why do or say something that takes you off the path of good manners?”

“He was like that commercial, E.F. Hutton,” she said. “When he talked, everybody listened.”

William Chamberlain observed the whirlwind of hype generated by a proposed boxing match between Muhammad Ali and Wilt.

“He’s just watching Wilt, never saying a word until it came to the point they almost signed the contract and he said to him, ‘You know you can’t beat that boy. You will not be boxing him.’ That’s all he had to say. That was the end of it,” Barbara said.

Away from the field of competition, Chamberlain had a gentle side best captured in a relationship he developed with the granddaughter of former teammate Paul Arizin. After finding out what a huge fan of his she was, Wilt shocked the teenage girl with a telephone call. Shortly after that, she became terminally ill and Wilt enriched her final days with phone calls every Friday and once escorted her when she was wheelchair-bound to a professional basketball game. The telegram he sent to the Arizin family upon learning of her death was read at her funeral.

Wilt also extended kindness to the college he left a year early so that he could begin his professional basketball career. After deciding not to form his own barnstorming team that would tour the country, he signed with the Globetrotters.

Four years after his death and five years after he returned to his alma mater for a jersey-retirement ceremony that brought tears to his eyes, Wilt’s estate donated $650,000 for four endowed funds in his name at Kansas. They are, according to a news release from the athletic department: “An annual scholarship for first-generation students with social or economic backgrounds that present challenges to the attainment of a college education; an annual scholarship for one men’s basketball student-athlete; an annual basketball clinic for Special Olympians conducted by Kansas Athletics; in alternate years, a women’s basketball or volleyball player for her senior year.”

Today, the spectators at the two games in Allen Fieldhouse will show Wilt’s sister and her husband what they think about Dippy’s contributions as a player and benefactor.