Students cut down on waste through cafeteria composters 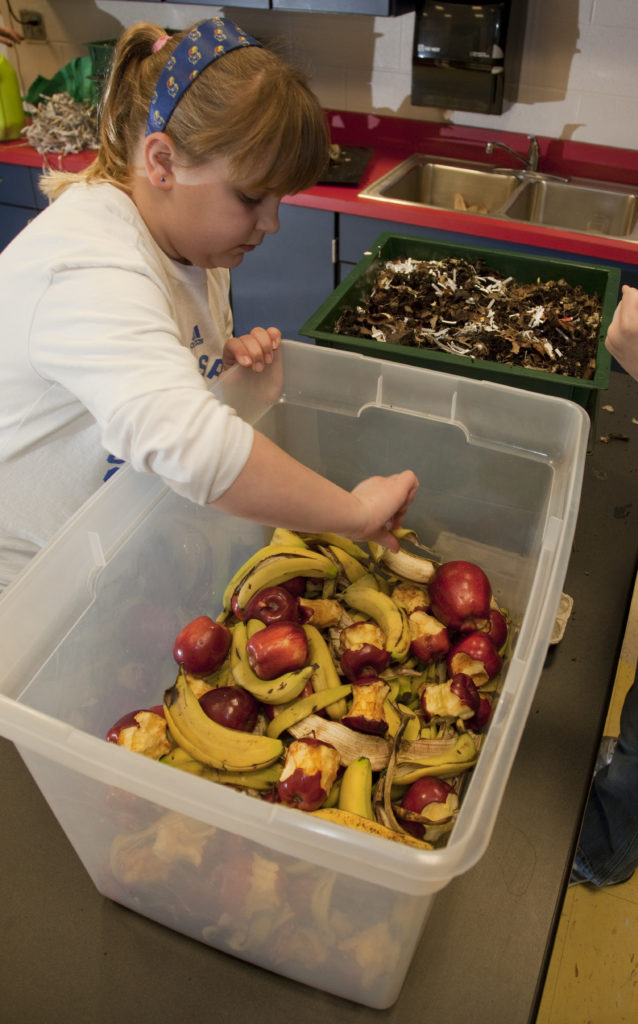 Worm worker Erin Conrad picks through lunch remnants to put in the worm bins Thursday at Starside Elementary School in De Soto. The school is tending to a collection of worms that are helping to break down cafeteria waste. 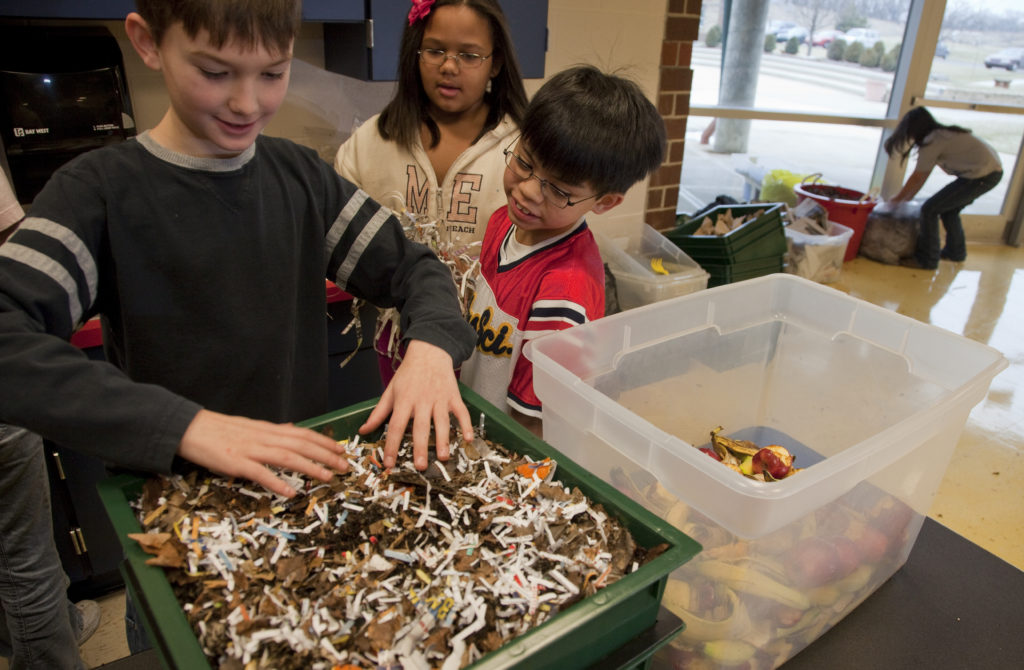 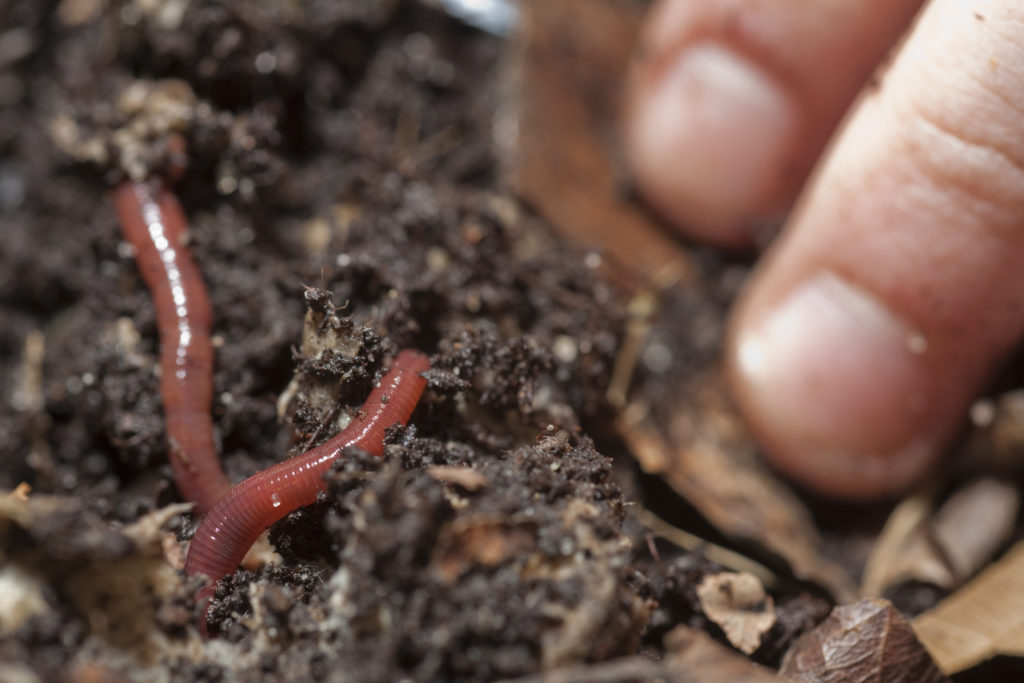 The school has12 bins or factories of the Pennsylvania red wrigglers to help create the compost. 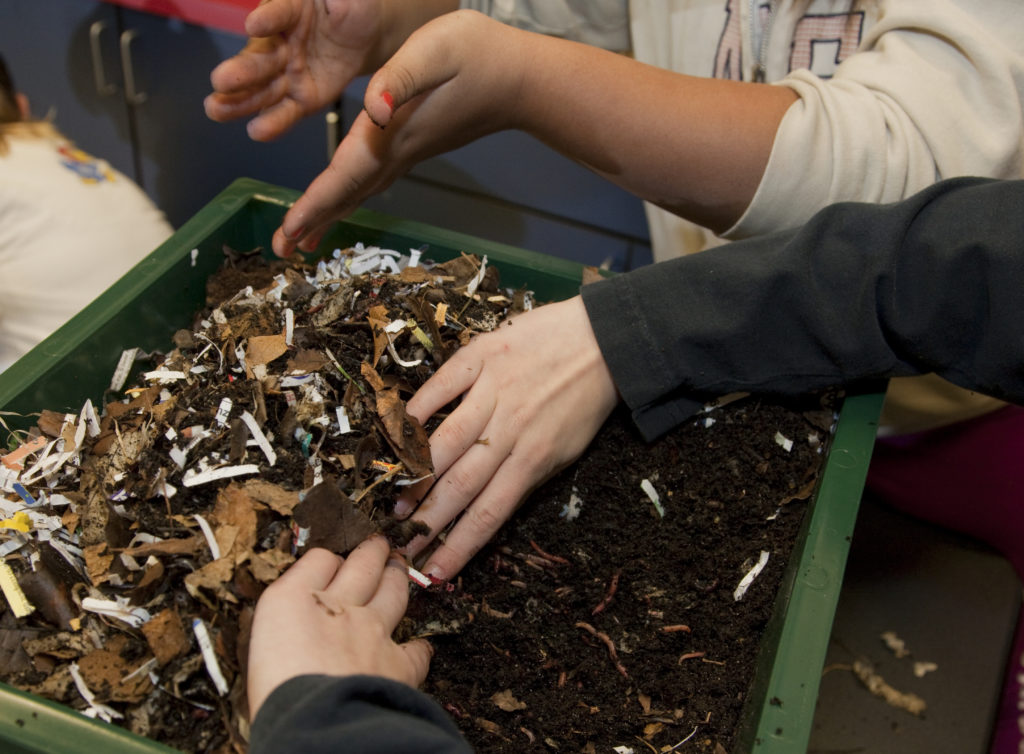 Starside Elementary School in De Soto is tending to a collection of worms that are helping to break down cafeteria waste. Student worm workers were checking on their wiggly workers in one of the composting bins.

The worms are part Starside’s continuing effort to reduce the school’s carbon footprint.

The composting, red, wiggling worms were delivered in bins to each third-, fourth- and fifth-grade classroom about two weeks ago, said Paula Henderson, school counselor.

The school purchased the worms, along with biodegradable lunch trays and larger recycling bins, after receiving a $4,500 Kansas Green Grant from the Kansas Department of Health and Environment and Kansas Association for Conservation and Environmental Education partnership.

Henderson said the school, which was named a Kansas Green School last spring, had been focusing on how to further reduce the school’s environmental footprint.

“We definitely needed to get the Styrofoam out of here, so that was number one,” she said. “Then we talked about how we could benefit from our cafeteria scraps.”

And so the composting worms, which cannot be fed meat, cheese or citrus fruit, were purchased to break down cafeteria waste, banana peels, paper towels and leaves, Henderson said.

“You get to learn more about worms and how their habitat is,” Karen said. “They eat and digest the stuff, and you get fertilizer and worm tea.”

Worm workers check the worms twice a week, adding scraps mixed with coffee grounds and wet newspaper to the bins.

Henderson said it would take about a week or so for the worms to digest the added food.

“It depends on how many worms are in each container,” she said. “The fertilizer adds up on itself and you remove the top bin to get the clean fertilizer.”

The worms also produce what Henderson and the students call worm tea, the liquid byproduct created as a result of the food and moisture in the worm bins.

“We learned about their digestive systems and how they eat the food,” Paden said. “They even have mouths. Mrs. Henderson saw one eating a piece of paper.”

Henderson said the entire school was excited about the worms and the continuous green impact the school has made.

Plans aren’t finalized yet, but the school hopes to use the fertilizer created by the worms for a school garden.

“We’re just having a good time with them,” she said. “We have done such a great job of being green. It’s amazing that our recycling bins are very large and our trash bins are so small now.”