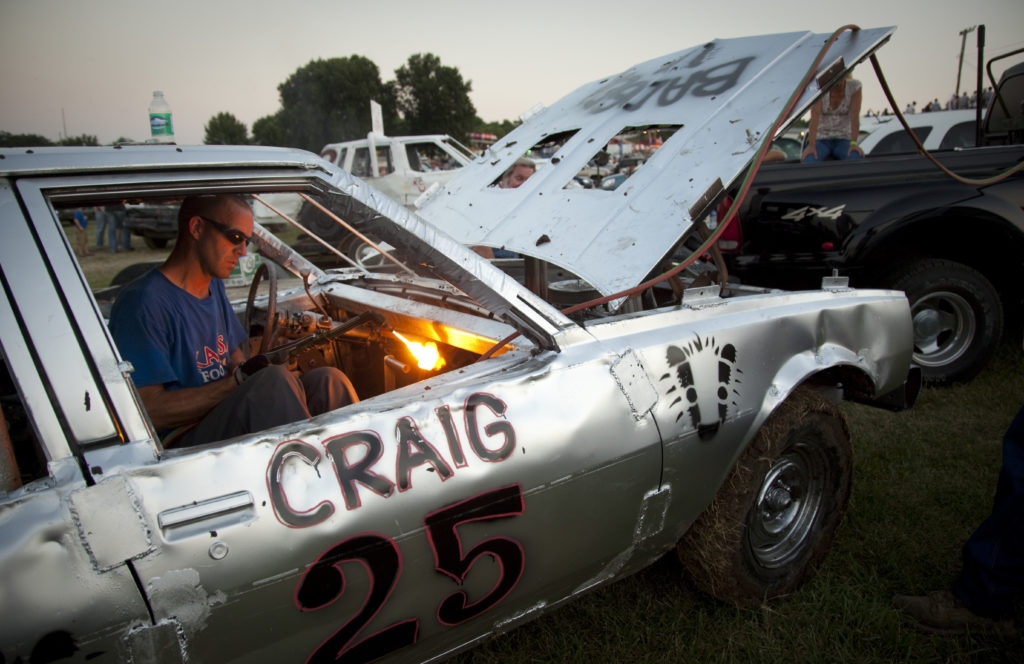 Chris Craig, Lawrence, uses a blow torch between rounds to cut a hole for his shifter in preparation for a consolation round during the Douglas County Fair Demolition Derby. After initial rounds at Friday evening’s event, derby competitors like Craig could be found hurriedly fixing their cars with sledgehammers, wrenches and even intense heat. 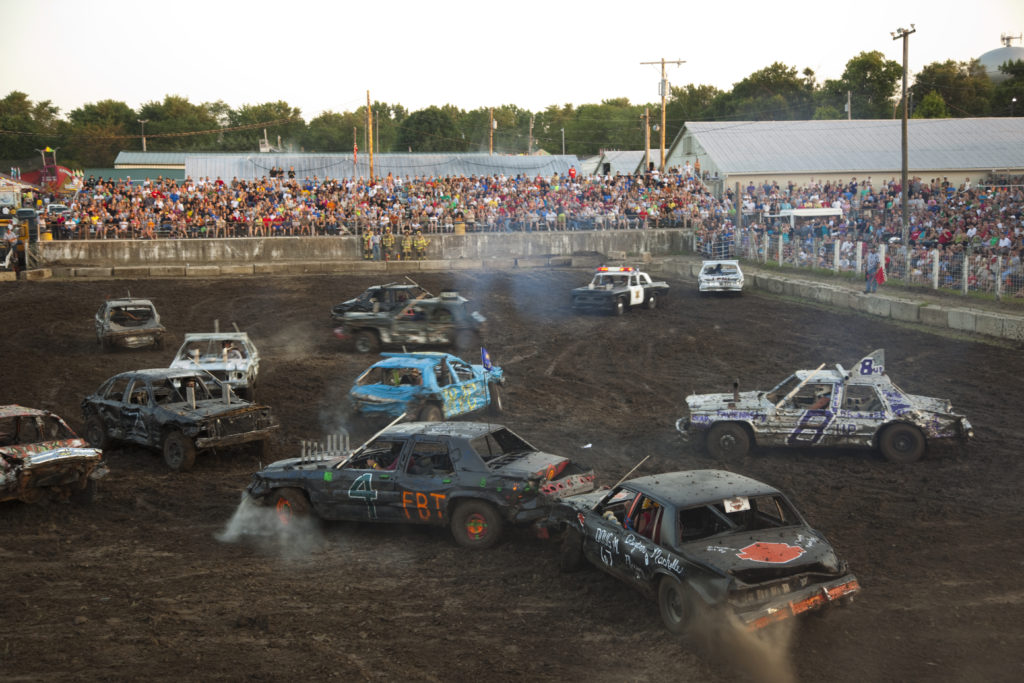 Cars slide in the mud during the first heat of the demolition derby.

Chris Craig sits in the front seat of his silver 1980 Chevy Caprice, but he’s not driving the car. He’s using a welding torch to cut a hole in the floor of his car, in a race against the clock to get back into the muddy arena they call the demolition derby.

Craig was one of many drivers at this year’s Douglas County Fair Demolition Derby, an annual event that draws thousands who want to see cars smashing and crashing into each other. What most people see is the cars driving, but what is just as important is what goes on behind the arena, when sledgehammers, chains and torches come out in a frantic effort to fix struggling cars.

Craig, a 40-year-old Lawrence resident, works at the scrap yard, the perfect day job for a derby driver. He spent 2 1/2 weeks building his car, in which he invested about $200, he said. “I tear cars apart all day long,” Craig said.

The stands were filled with neon orange shirts at this year’s Douglas County Fair Demolition Derby. Three vehicles painted orange drove in this year’s derby. These drivers and fans were honoring Jamie-Lee “Otis” Pettengill, who died earlier this year and loved driving in derbies.

Lindsay Wiseman, a 23-year-old Lawrence resident, placed fifth in the compact division with a 1990 Mazda 323 marked XXL, Otis’ number. Wiseman was a family friend, and she, her father and a few others worked on her car in their garage to get it ready for the derby.

“It’s going to be a long day,” she said. This was her second derby.

And tearing is what he did. He was in the first heat of his division, driving until he got hit and his engine decided to sputter. Drivers had just one round to fix their cars to go back into the consolation round, and Craig wanted to make sure his car was running perfectly.

“If you don’t have a car that runs, it doesn’t matter,” he said.

Craig built his car in Tonganoxie with his friend Chris VanAnne, whose nephew Dylan Faulkner drove the car sitting next to Craig’s. Faulkner, an 18-year-old Tonganoxie resident, drove a 1986 Crown Victoria decked out in K-State colors until his battery died, his hood got wrinkled up and his front bumper came off. His car had to be towed out of the arena back to where his pit crew was waiting.

Between rounds, they jury-rigged his hood, chaining the hood to another car and pulling it flat while another hammered it down. That’s the kind of fixing these cars take, but even in its dilapidated appearance, Faulkner’s grandfather Larry VanAnne said the car would make it to the next round.

“We’ll get it running. That’s no problem,” he said.

The drivers’ ultimate goal is to make it to the feature round for their class and win a piece of the $11,000 prize, but it’s a toss-up to see who wins it. Craig worked to hammer in his fenders so there was less a chance of his tires being damaged in the next round. But even if he fixes every problem he can find, there’s no guarantee a strong hit won’t take out his car again.

“That’s the thing with a derby, you just don’t know,” Craig said.